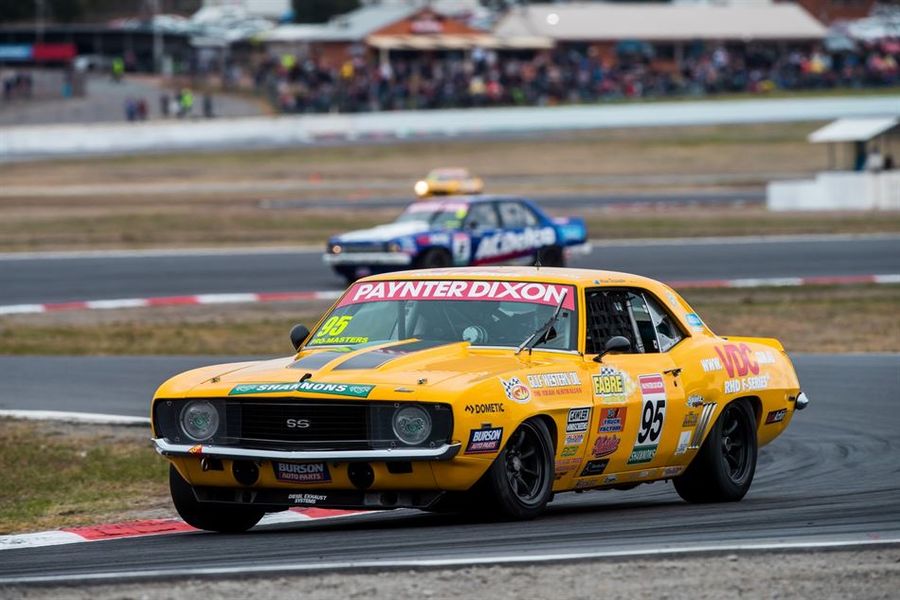 Steven Johnson’s second-straight Paynter Dixon Touring Car Masters round victory has closed the margin at the pointy-end of the championship to just five points, following round three of the championship at Winton Raceway. Following victory in race seven on Saturday, Johnson swept to victory in race eight on Sunday morning and had looked to sweep the weekend before tripping up at the end of the final race.

On cold tyres, the WM Waste Team Johnson driver ‘Did a McLaughlin’ and made an error on cold tyres following a restart, handing the lead to a surprised Adam Bressington. The VDC / Whiteline Racing Camaro driver then withstood a full-on final lap to hold out Ryan Hansford, Johnson and John Bowe to win the final race of the weekend.

It was Bressington’s first series race victory, following his triumph in the Dometic Trophy Race at the Adelaide 500 earlier this year.

Bowe’s weekend unravelled in race eight when a power steering hose failed when he was locked to the tail of Johnson’s Mustang. He slipped down the order to seventh position while managing the issues and then, in limited laps, could only mange to recover to fourth in the finale’.

The results leave Bowe heading Johnson in the overall championship by just five points ahead of the trip to Darwin in four weeks’ time. Johnson won the Winton round over Bressington and Bowe, while Ryan Hansford was strong again – scoring the second-most points of any driver all weekend and winning the ProAm class.

Andrew Fisher and Tony Karanfilovski completed the podium in that class, while Leo Tobin won ProSports over Jim Pollicina and Rob Burns – the latter on his debut in the series.

Race eight on Sunday morning had looked to be a straightforward affair and a near carbon copy of Saturday’s race; Johnson leading Bowe in a pressure battle early on, while Hansford and Bressington battled over the final spot on the podium.

That changed when Bowe struck his dramas mid race, Hansford leaping to Second with Bressington in close company. The pair battled side-by-side to the line with the Torana just edging out the Camaro.

Both King and Tilley lost early track position in the top eight after separate incidents that saw them spinning down the order.

Race nine started dramatically when a fast-starting Bruce Williams and Adam Bressington made contact on the run into turn one at race’s start. The contact broke the steering on the Torana, the Melbourne driver only just managing to slow the car and avoid contact with any other cars.

A lengthy Safety Car set the race up for a quick sprint to the line and the race looked to be Johnson’s, following a strong restart. However an error on cold tyres at turn eleven and twelve saw him caught out, with Bressington and Hansford pouncing as the leading group ran to the line to start the final lap.

Johnson just held out Bowe for third, while Bressington was forced to fend off Hansford in the battle for the lead. The Camaro ultimately held on by 0.5 seconds with Johnson and Bowe close behind, Bressington limping home with a rear tyre near the point of delamination thanks to the damage he suffered early in the race.

Ryan Hansford and Adam Bressington are split by just five points in the battle for fourth and fifth, with Gomersall, King, Pollicina, Tobin and Fisher completing the top-10.
J
ust 27 points split Tilley and Hansford in the ProAm class battle, while Jim Pollicina now holds a one-point lead over Leo Tobin in the ProSports class fight.