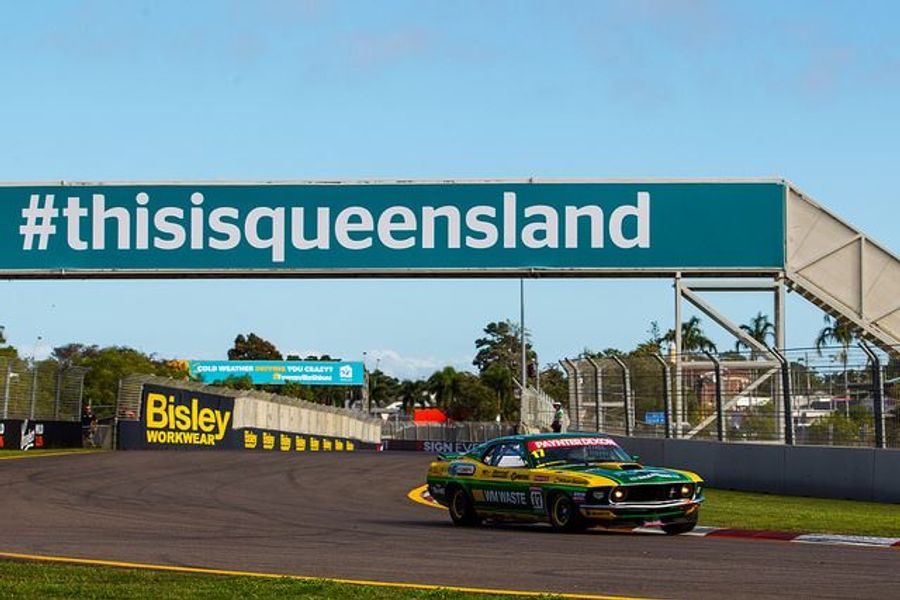 Steve Johnson and John Bowe have set the early pace today in practice for round five of the Paynter Dixon Touring Car Masters Series on their debut at the Watpac Townsville 400. Johnson set the fastest time of the day – 1m21.3629s – in the first of two, 20-minute practice sessions held today in a lap that would turn out to be the quickest of the day.

Johnson was fractionally slower in the second session held later in the afternoon in different conditions – heavy cloud cover shrouding the circuit as opposed to bright sunshine in the morning. However, the WM Waste Team Johnson Mustang was still more than competitive enough to top the standings by 0.4 seconds on the overall times.

“It’s good. Thought the car would be OK here especially over the bumps,” Johnson said. “Riding the kerbs important here – it’s a bit like an Adelaide, Newcastle or Sandown style of circuit and we seem to have got the car OK. Doesn’t feel awesome even though the time sheets say we’re doing well, but it's not bad.

“We’ve had a really good run lately so it’s about maximising what we have.”

Johnson said he expected competitive racing on the series’ debut on the 2.8km Reid Park circuit this weekend.

“It’s going to be good. Glad we had two practice sessions, mainly for those who haven’t been here before because it’s a tricky little track and really important to get track time. I think the races will be quite tight. It will be difficult to pass and getting track position early will key, then from there managing though the race.

“Looking after engine and brake temps will be pretty vital so we’ll need to be smart about what we’re doing.”

Bowe was second in both sessions and improved in practice two after setup changes to his Wilson Security / PAYCE Holden Torana. The pair will aim to set the pace again in qualifying tomorrow morning and extend on the twelve occasions the pair have now locked out the front row.

Gomersall, however, faced an early setback when he after contacting a wall at turn nine late in the opening session; forcing Matt Stone Racing to take the Torana off-site to effect repairs. He sat out the second session, Fisher assuming the position as next-best behind the leaders in his quick Falcon.

Ryan Hansford ended the day fifth overall in his Multispares Torana. The Queenslander has strong street circuit form in his past – he was on pole in Newcastle late last year and finished in the top six in eight of his last 12 V8 Ute races held in Townsville.

Bruce Williams proved the pace of the Holden Torana’s by finishing the day sixth overall in his AC Delco entry, the last of the drivers in the 1m22s.

Titlle contender Adam Bressington was seventh in the VDC / Whiteline Racing Camaro, his best of 1m23.15s placing him within striking range of the leaders. Cameron Tilley was 0.1s behind the Camaro in the six-cylinder Valliant Pacer, his 1m23.25s a competitive showing.

Tony Karanfilovski was ninth and Jim Pollicina made it five Torana’s in the Top-10 today by rounding out the first half of the grid.

Just 1.1 seconds covered Gomersall in third (1m22.47s) to Pollicina (1m23.58s) in tenth – setting up a ferociously competitive battle in qualifying on Saturday morning.

On his debut behind the wheel of the Wellpro Racing Pontiac Firebird, Rob Hackwood hovered just fractions outside the top-10 overall, his 1m23.95s best placing him 11th on combined times after running old tyres in the second session.

Aaron McGill was an impressive twelfth in the Ranger Lifting GTHO, only in its second ever meeting in the hands of the former Super2 series runner. His 1m24.22s lap came in practice one while mechanical issues restricted him to just one lap in the second session.

The Paynter Dixon Touring Car Masters series will tackle a 20-minute qualifying session tomorrow morning at 9:50am before race one at 12:40pm.