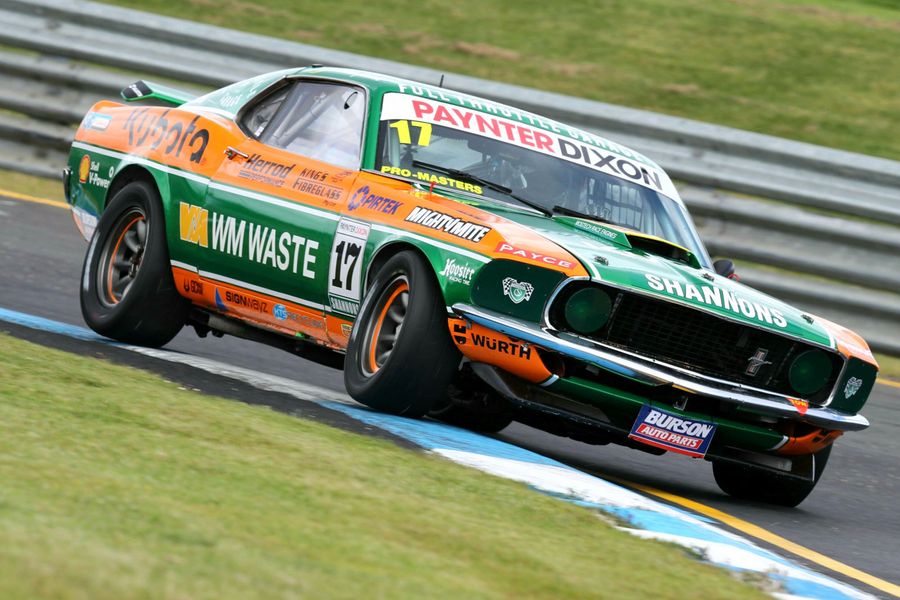 For the second year in a row, Johnson and Bowe have locked out the front-row for the Paynter Dixon Touring Car Masters annual visit to retro round. Johnson’s fifth pole position of the season came in yet another session-long battle with old rival Bowe, who had topped the session early in his Paynter Dixon Holden Torana.

After Bowe had rocketed to the top of the timesheets mid-session, Johnson went for a final flyer and was ultimately able to eclipse the Torana by 0.16 seconds with a record-smashing 1m13.5688s flyer. It is Johnson’s 18th TCM pole and puts the WM Waste Ford Mustang driver in the best possible position for the first of three championship races this weekend – given he’s also the series leader.

Bowe’s effort was just his second front-row effort of the season, while Aaron Seton completed the retro-round theme by placing his No. 30 Mustang third. The third-generation driver rebounded from a broken shock absorber mounting in practice to secure his place on the second row, alongside title contender Ryal Harris’ EFS Camaro.

Harris’ was quick throughout the session however a strange front-end vibration through the front wheels and bodywork of his Camaro caused plenty of discussion, if not a lack of pace. Harris is a title contender and, with Bowe, sits well within striking distance of championship leader Johnson heading to tomorrow's races.

The Whiteline Racing duo of title contender Adam Bressington and Adam Garwood were separated by 0.04 seconds in fifth and sixth, respectively, while Marcus Zukanovic and Jim Pollicina will make up the fourth row of the grid.

The top-10 was completed by Ryan Hansford and Andrew Fisher with the 10 fastest cars in the session all comfortably beneath the existing Sandown TCM qualifying record; the top nine within one second of the pole position time.

To show the rate of improvement in both the circuit and cars this year, the time set by Bruce Williams to qualify his AC Delco Torana 11th would have placed him on the front row during the series’ last visit.

The remainder of the field were also tightly bunched, though issues relegated some further down the field than perhaps expected. Among them was Cameron Tilley, who battled both an off at Turn nine – that brought out the red flag – and a power steering leak that left him relegated to 18th position having completed only two laps.

Remarkably, both sessions were held in dry conditions despite heavy rain between practice and qualifying. Teams scrambled to fit wet tyres and make setup changes to suit a potentially wet qualifying, only for it to dry well before the start of the session in the early afternoon.

Saturday marks a busy day for the Paynter Dixon Touring Car Masters field, with action commencing at 8:45am with the Dometic Trophy Race.

Two title races will then be held in relatively quick succession, at 11:25pm and 1:35pm, over 10 laps each. The final race of the year – likely to be the title decider – will be held on Sunday.