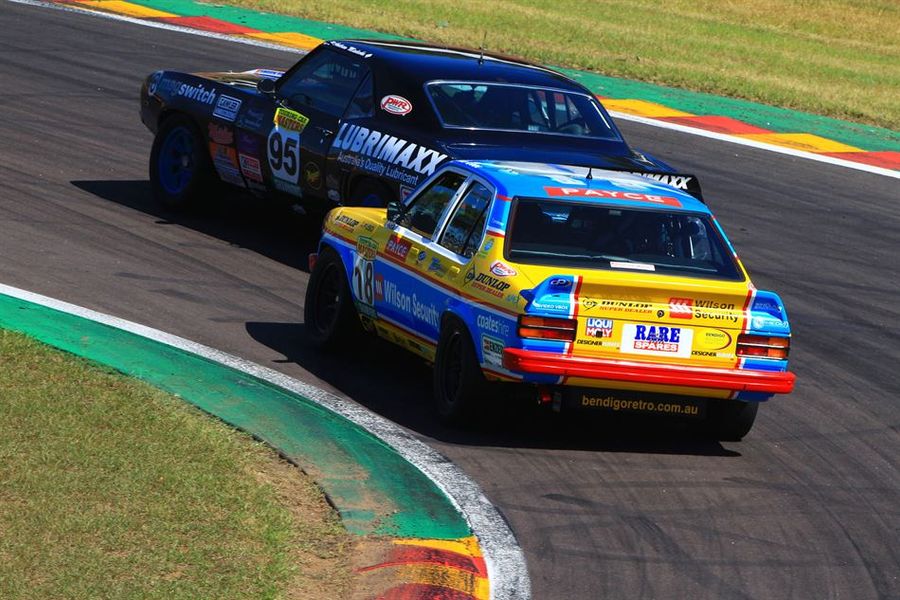 AS Stepehn Johnson and John Bowe battled for the overall victory in the ENZED Thunder in the Valley and round four of the Touring Car Masters series, Andrew Miedecke has rushed to the top of the ProMaster points standings at the series half-way point. Johnson maintained his perfect ENZED Touring Car Masters round record by winning in Darwin, his two wins and a second allowing him to edge out teammate and long-time friend John Bowe for overall honours.

A genuinely thrilling display of racing between the pair – and the likes of Andrew Miedecke and Jim Richards – entertained the huge Darwin crowd all weekend with three sensational races. Jason Gomersall enjoyed a supremely consistent weekend in his iSeek Racing Holden Torana to win the ProAm class over Andrew Fisher and Cameron Tilley, while Wayne Mercer scored the ProSports win ahead of Leo Tobin and Garry Treloar.

Johnson won race two on Sunday morning and then battled with Bowe in race three, the pair trading the lead on three occasions before the Torana was able to edge in front for a narrow, side-by-side victory. After winning round two of the series in Tasmania, Johnson’s victory came ahead of Bowe and Andrew Miedecke’s Lubrimaxx Camaro.

“I have to thank my sponsor for this weekend.. John Bowe!” Johnson joked of his car owner on the podium. “It’s been a fantastic weekend and really hard work battling with JB and everyone else. It’s sensational to come up here every year whether you’re racing or not – but to do it when you are is even better.

“Thanks to everyone who has supported us getting on track in the Mustang this weekend and hopefully we can do some more.”

The consistent Miedecke scored third in the ProMaster class this weekend and provisionally rockets to the lead of the standing ahead of Jim Richards and Greg Crick. Leading the points coming into the round, Ford Mustang driver Gavin Bullas failed to score points in both Sunday’s races in Darwin after suffering overheating issues in his Mustang, and as a result has dropped down the points order to fifth.

Both of Sunday’s races were action packed: with Johnson leading home Miedecke and Bowe in race two after the Camaro driver spent much of his race fending off the SL/R 5000 Torana affixed to his rear bumper.

Race three was similarly competitive, Bowe and Johnson duelling for the lead as Jim Richards stormed through to grab third away from Miedecke and Greg Crick in the closing stages. There were plenty of sensational battles throughout the field as drivers like Andrew Fisher (who won ProAm in race three) and Keith Kassulke (a storming drive to sixth in the finale’) worked their way to the front.

The most significant drama of the weekend came on the opening lap of race two as Bill Pye crashed heavily at turn three. Pye’s Chevy Camaro collected the inside kerb on the opening lap, unsettling his car and sending it across the circuit and into the Armco barrier – collecting an unsuspecting Garry Treloar in the process. Treloar was sent into the inside wall of the circuit and with heavy damage, was forced to withdraw from the remainder of the weekend.

Showcasing the strength and safety of the TCM Machinery, both drivers were uninjured in the accident.

After four rounds of the series, Andrew Miedecke provisionally leads the ProMaster points standings by just fourteen points over Jim Richards. Greg Crick sits in third, just 28 points from the lead, while the ever consistent Mark King has moved to fourth place in his King Springs / Whiteline Transport Racing Chevrolet Camaro.

Gavin Bullas sits fifth in the standings, one point behind King, while John Bowe is now only 119 points from the lead despite missing the round in Tasmania earlier this year.

The next round of the ENZED Touring Car Masters Series will be held at Queensland Raceway in Ipswich, with the V8 Supercars, on July 31-August 2.