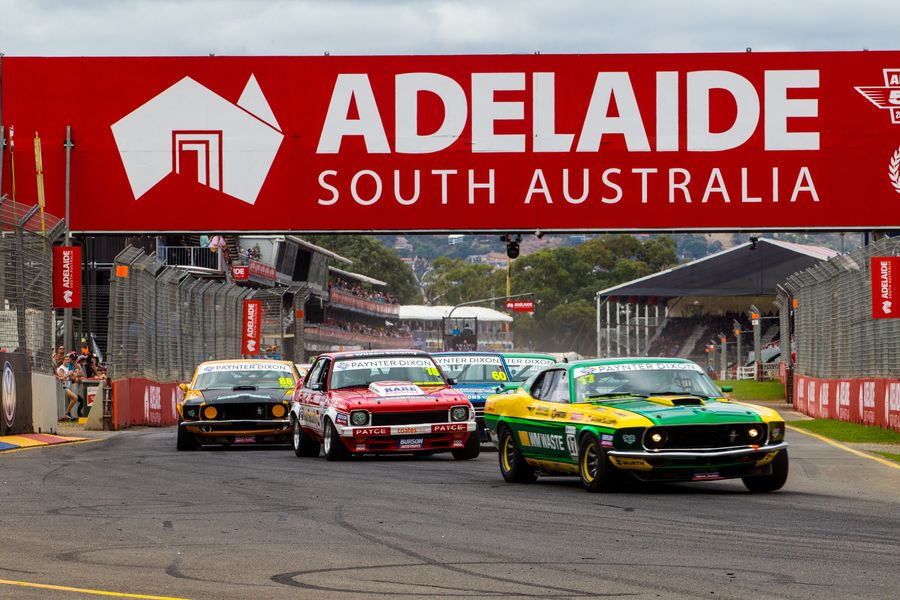 All three Paynter Dixon Touring Car Masters classes will go down to the wire at the Coates Hire Newcastle 500 this weekend in New South Wales. Steven Johnson and John Bowe will battle for the Outright and ProMasters class title for the second straight year, Johnson hoping to go back-to-back aboard his 1969 Ford Mustang.

Both the ProAm and ProSports classes also remain up for grabs in what is shaping up to be a winner-take-all finale for each this weekend.

Johnson leads Bowe by just 59 points heading into the final round, however his chances are enhanced when taking into account the TCM Sporting Regulations regarding points distribution. Each driver must drop their three worst championship race scores and one Trophy Race score at the end of the season. That means Johnson actually leads Bowe by 84 points once the corrected scores are applied.

Johnson’s worst results include his race three non-finishes in Adelaide and Townsville and the 52 points he earned for third place in the final race at Winton. Meanwhile, Bowe has only one non-finish this year when he ended up bunkered at Sandown during the rain-affected opening race.

The Torana driver must then also go back to Winton for his next two worst races; seventh and fourth in the last two races held at the country Victorian circuit in May. Both drivers also drop 20 points from their Trophy Race scores, given each has started and finish each jumbled grid affair to date this year.

The pair are now the only two drivers in contention with Adam Bressington, in third, 223 points behind.

A close fight is underway between Jason Gomersall and Mark King for fourth and fifth place in the championship, respectively, with the Torana driver leading his Camaro driver by just 17 points on corrected scores.

The most competitive fight could be for ProAm class honours, with Cameron Tilley leading Ryan Hansford by just 46 points heading into the final round. Tony Karanfilovski sits just one point further back in third making it a three-way fight for the title. The three drivers’ scores do not change when their three worst championship races and worst Trophy Race are deducted from their score.

Both Tilley and Hansford have four non-finishes to their name this year; Tilley’s horror run of late having him out of four of the last five races. The Sydney driver is currently working overtime to repair his Valliant Pacer after suffering major damage when a tail shaft parted ways at Bathurst however is set to compete this weekend.

Meanwhile, a string of consistent results in the second half of the season has lifted Karanfilovski into contention, setting up the three-way fight. After a tight battle early in the season, Jim Pollicina enjoys a comfortable lead over Leo Tobin in the ProSports class battle – though results are definitely not settled yet.

The 136-point margin between the two could be overcome in Newcastle – though Pollicina’s recent form has been impressive. The Sydney driver is looking to seal his third major title of the season, having already won the V8 Touring Cars series ‘Kumho Cup’ class and the Australian Production Car Championship this year.

The grid for the final round of the 2018 championship includes Newcastle racer Cameron Mason, who will be keen for a strong performance in front of local fans aboard his 1966 Ford Mustang. Mason, the son of 2007 TCM Champion Steve, enjoys support from a significant number of local businesses – including several located in and around the circuit precinct.

Newcastle will also see the return of Ben Dunn and his Chevrolet Monza coupe, while Layton Barker from Tasmania will make his TCM debut driving a 1972 Holden Monaro GTS.

The Paynter Dixon Touring Car Masters series will contest four races across the Newcastle weekend to conclude a thrilling 2018 season. The Dometic Trophy Race will be followed by races 22, 23 and 24 of the championship season.