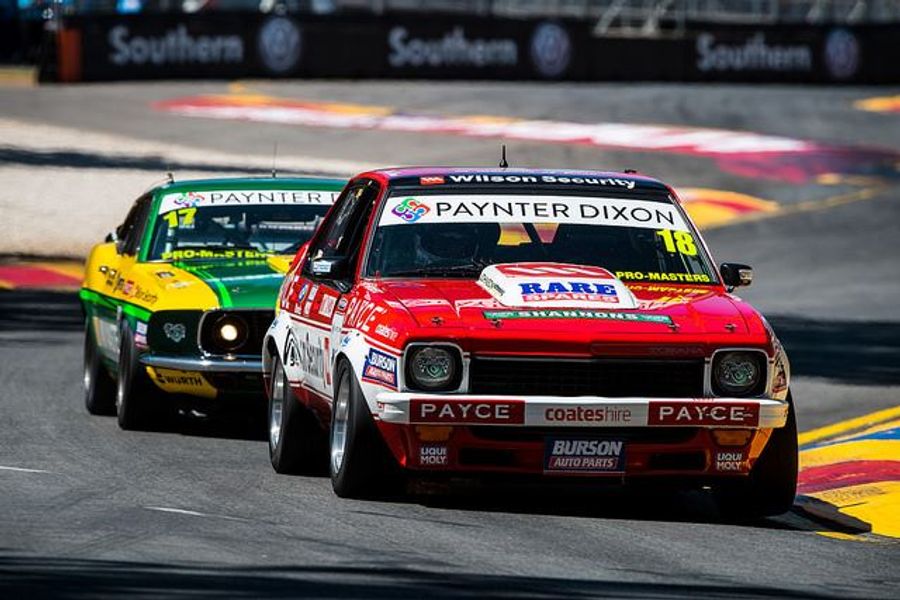 Painter Dixon Touring Car Masters champion John Bowe says there’s just no place like home. Though now based in Victoria, the former Australian Touring Car and Gold Star champion is one of the Apple Isle’s greatest motor sporting exports and will be back on track at Symmons Plains for the first time in years this weekend.

Bowe currently leads the TCM title race having won the opening round in Adelaide in early March, however he heads to Tasmania having not competed ‘at home’ for some time. This weekend he returns aboard his Wilson Security / Payce supported Holden Torana SL/R 5000.

“I think it’s been five or six years,” He said. “It’s funny that it’s been so long because I grew up there. I remember going out there as a child and watching my dad and his mates race MGs.

“We never saw much racing because we’d run around collecting old bottles and cashing them in! Later I remember watching the A9Xs and L34 Torana’s there with great names like Brock, Grice, Morris and a local guy called Graham Parsons who always gave everyone a shock. It’s all gone full circle now I’m driving cars just like that.”

Bowe missed the last time Touring Car Masters visited Symmons Plains in 2015 due to an overseas engagement, handing the reigns of his then Ford Mustang to Steven Johnson. Despite his time away, Bowe remains an avid fan of the technical 2.4km Symmons Plains layout.

“The track really only has three meaningful corners that aren’t flat out and as a result it’s quite technical,” he said. “It favours big engines and big horsepower and cars that don’t have a lot of drag because what you want is straight-line speed. It’s paramount.

“I don’t expect my five-litre Torana to be quite there with the big six-litre cars in the field, but I’m happy to be proven wrong. Regardless, it’s great fun to drive there. I’ve raced everything from Formula Vee to F2, F3, Formula 5000s, a GT Ferrari, the DJR Sierras and Supercars.  It’s different in every single one of them.”

“I won the 1995 Touring Car round there the year I won the championship and that was pretty special,” he said.  “Well before that I had a fantastic battle with Alfie Costanzo (Multiple Gold Star champion) there in Formula 5000s and that was a highlight.

“Tassie people really support Symmons Plains and per head of population they get an incredible crowd. I hope they come and say G’Day on the weekend.”

Bowe leads a talent-packed Touring Car Masters field to Tasmania ahead of a huge weekend of racing. He is one of just three drivers to win the twelve TCM races held across four rounds at the venue – with the other two also to feature this weekend.

Double TCM champion Gavin Bullas is a former round winner at Symmons Plains, while Steven Johnson won on his debut in the category when driving Bowe’s Ford there in 2015. Of course, he would later purchase the Mustang and went on to win the 2017 title with Team Johnson.

The Queenslander was on course to win the opening round of the new season, too, before broken wheel studs saw his right-rear depart late in the final race of the weekend in Adelaide.

Other contenders in Tasmania are likely to include Whiteline Racing duo Adam Bressington and Mark King (Chevrolet Camaros), Torana pilots Jason Gomersall, Ryan Hansford and newcomer Jim Pollicina and the Falcon GTHO of Andrew Fisher. The Jesus Racing driver returns this weekend having rebuilt the car following a hefty test in pre-season testing earlier this year.

The Paynter Dixon Touring Car Masters series will tackle Practice and Qualifying this Friday, before the Trophy race kicks off proceedings on Saturday morning. Several autograph sessions will be held in the TCM paddock for local fans to meet the stars and see the cars of the TCM series.