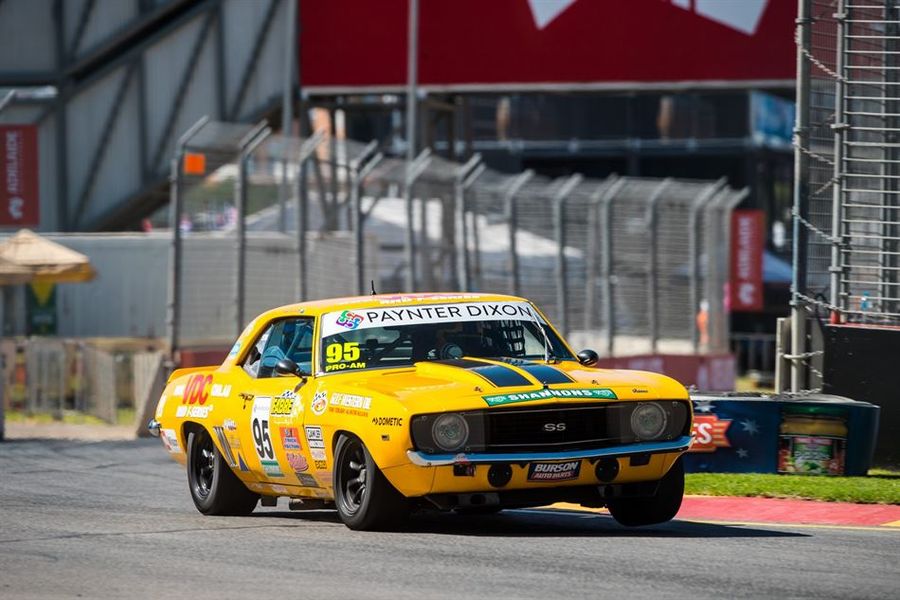 Adam Bressington has won his first Paynter Dixon Touring Car Masters race, storming from 17th position to win the Dometic Trophy Race on the opening day of the Adelaide 500. The Whiteline Racing Camaro driver crossed the line second behind Paul Freestone’s similar 1969 Camaro, however Freestone was penalised five seconds for a kerb infringement – handing the race to Bressington.

The victory will be particularly sweet to the Adelaide team after Bressington was denied a victory in Newcastle last year after receiving a penalty for a restart infringement – dropping him down the order despite crossing the line first. Though based in New South wales, Bressington is an adopted South Aussie thanks to his role driving for Adelaide transport and racing identities, Bob and Sharon Middleton – their team and business based just 20 minutes from the famous Adelaide Parklands circuit.

The trophy race was a 10-lap thrill-a-minute affair that started with Brad Tilley and Cameron Mason leading the field to green following the field inversion.

Tilley powered in front and spent the first six laps valiantly defending his position from Bruce Williams’ flying ACDelco Holden Torana. Williams made attempt after attempt to work his way past the Falcon GTHO, eventually going around the outside at the turn nine hairpin to take point in a brilliant move – only to run wide at the left-hander entering Victoria Park to surrender the lead a corner later.

Williams’ race then unravelled when he was the innocent victim of a turn 12 crash just moments later, turned around by Leo Tobin after Tobin himself was bumped into by Tony Karanfiovski, who was attempting to pass down the inside of the hairpin. Tobin had also run strongly and was third at the point of contact, bottled in behind the increasingly defensive Tilley and the leading pack.

The contact split apart a ten-car freight train for the lead that included a host of key competitors all trying to work their way to the front. In the aftermath, Tilley continued to lead before being overhauled by Freestone’s Camaro with two laps to go.

Bressington – who had lurked behind the pack for the early stages of the race – then also slipped past and set about catching the leading Camaro on the final lap. He went around the outside at turn nine on the final lap, though the door was shut by the leader and the subsequent contact dropping Bressington far enough behind the leader to be able to challenge in the final corner. However, the penalty post-race was enough to change the order and elevate the Whiteline Racing driver to the victory – a remarkable one given he started 17th.

Freestone ultimately finished third, behind a remarkable performance from Jim Pollicina who grabbed second. The MoComm Communications Torana ran strongly all race and had been involved in the leading fight for much of the 10-laps, avoiding the dramas at turn 12 to remain in contention throughout.

All results remain provisional as the race officials check through the various incidents.

The Paynter Dixon Touring Car Masters season proper commences tomorrow with the first of three series races to be held this weekend, commencing at 11:15am.