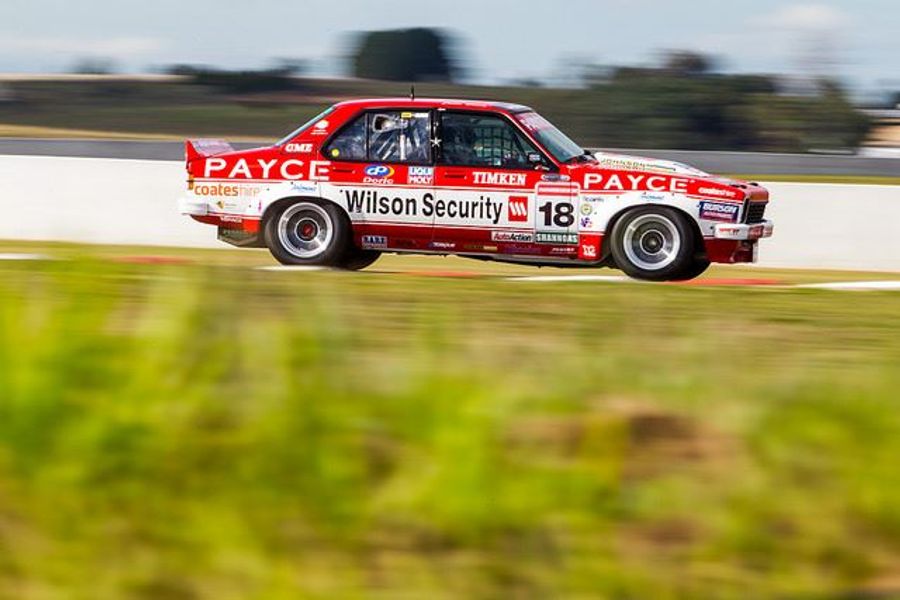 John Bowe and Steven Johnson have battled out one of the all-time great Paynter Dixon Touring Car Masters qualifying sessions today at Symmons Plains Raceway in Tasmania. Bowe ultimately prevailed in a compelling session that saw the drivers swap the top spot on several occasions before the Holden Torana prevailed with a last-gasp flyer with less than one minute to go in the session.

Bowe was the first of the pair to set an early benchmark, forcing Johnson to run a second time in his WM Waste Ford Mustang in a bid to challenge for pole. That result worked; Johnson jumping to the top with his final flyer of 56.1961s, at the time just 0.01s quicker than Bowe.

It then took a mighty final effort from Bowe to top the Mustang, his 56.1266s best coming with 15 seconds to go in the session and just enough to usurp Johnson by 0.06s. It was the first pole for Holden at Symmons Plains, though Bowe’s third from five attempts at the venue.

Ryan Hansford will start the first championship race of the weekend from third, an impressive result for the Multispares Racing driver given he missed the entirety of the practice session when a steering arm broke on his first lap out of pit lane. With repairs effected, the Queenslander topped the charts for the middle stanza of qualifying before Johnson and Bowe went to work late in the piece in their battle for what would ultimately be pole position.

Hansford’s best of 56.5858s was only fractionally behind the previous qualifying record at Symmons Plains. Mark King was an outstanding fourth in the Whiteline Racing / King Springs 1970 Chevrolet Camaro, his best qualifying result in some time.

It was a competitive showing from the Whiteline duo as King’s teammate Adam Bressington was fifth, just 0.1 seconds behind his Chevrolet stablemate.

Double Symmons Plains winner Gavin Bullas qualified sixth, though was only able to complete four laps of the session before his Carne Grill / Precinct Bar supported Mustang broke and was forced to pull to the side on the run into the final corner with a blown engine.

In a traditional tight Tassie session, the top six drivers were split by just one second. Just behind them was Paul Freestone, who placed his Camaro seventh, and Cameron Tilley in eighth.

Tilley has picked up support from local business BRM Transport Refrigeration to support their local charge and was within 1.5 seconds of Bowe’s record pole lap despite having six-cylinder power on such a V8-friendly circuit. Jason Gomersall and Leo Tobin were next, 0.01 and 0.15s behind Tilley, respectively.

Racing commences tomorrow morning at 11:45am with the traditional TCM Trophy race, with race four of the championship following at 2:55pm.