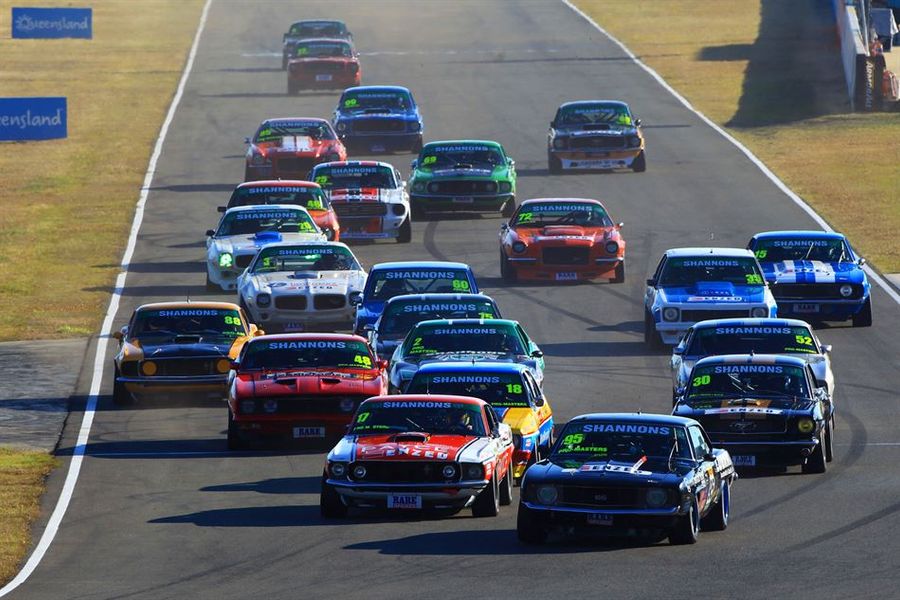 Steven Johnson maintained his perfect run of success in the ENZED Touring Car Masters Series, winning his third round from three this year at the Shannons Queensland Tourist Trophy at Queensland Raceway. Though Johnson won all three races at the Ipswich venue, his round win didn’t come easy: firstly having to fend off Andrew Miedecke in race two and then his own teammate – and car owner John Bowe – in race three.

Miedecke grabbed an early lead in race two before Johnson chased him down and passed him, while in the finale’ he led from lights to flag but had to withstand a challenge from Bowe in the closing laps as the Torana driver rapidly closed. Johnson won the round ahead of Miedecke (two seconds and a third) and Bowe.

Jason Gomersall (iSeek Racing Holden Torana) won the ProAm class on a countback, tying on points with Tony Karanfilovski for the class victory, with Ian Palmer’s Pontiac Firebird third. Leo Tobin won Pro Sports, and as he was the only entrant in the class this weekend also scored second and third place as well. Charlie O’Brien won the TransAm class ahead of Brett Curran and Ian Woodward.

Johnson was thrilled to win on home turf, take his third TCM round win and take his streak to eight race wins from nine starts. “You can’t do it without a great team and thanks to Steve and Brendan for the car, everything was spot on this weekend as it always is,” he said. “I’ve got to thank JB, the team owner, even though he did crash into me today! It’s been great to have all you guys here, the racing has been awesome and thanks to Rare Spares, ENZED and Shannons for supporting the category.

“It’s been a great weekend it’s never nice to see cars go into the trailer like Keith, Greg and Cameron but I’m glad they’re OK and hopefully they get them repaired for the next round.”

Johnson survived a brief run-in with Bowe as the pair battled for second place early in race two, light contact between the pair giving Bowe the repair bill for not one but two panel and paint jobs before the next round. Bowe finished fourth in race two after an attempted pass on Johnson resulted in him losing the spot – and third to a charging Glenn Seton – following a move at turn four.

“Andrew Miedecke had Steve perched on the right hand side and was slowing him up, as you’re allowed to do, and I thought there was a gap on the inside and that I could sneak though,” Bowe explained. “Stevie was trying to do a criss-cross which I realised when I got alongside him! We had a coming together and he apologised but it’s just one of those things!

“As much as I don’t like paying for the damage it’s a fact of life!”

Miedecke finished second for the round, another consistent performance by the Whiteline Racing Camaro driver extending his lead in the ProMaster points standings to 46 over nearest rival, Jim Richards.

The racing at Queensland Raceway was highly competitive with a trio of close races this weekend. Race two saw the pitched five-car battle for the lead between Miedecke, Johnson, Bowe, Seton and Richards while the third race saw a flying Eddie Abelnica jump to second early in the running before dropping back to fourth at the finish.

Seton was on track for a strong weekend following finishes of fourth and third in the first two races, respectively, before a brake issue saw him withdraw from the finale’ just prior to the rolling start.

The only major incident of the weekend occurred at the start of the second race on Sunday morning, when Cameron Tilley locked the brakes of his Valliant Pacer heading into the turn three braking zone. The Pacer was turned right across the infield and, out of control, bounded into the path of Keith Kassulke’s XB Falcon. Kassulke was then hit by Greg Crick following the initial contact, however all three drivers emerged unscathed – though Kassulke was battered and bruised - from the incident.