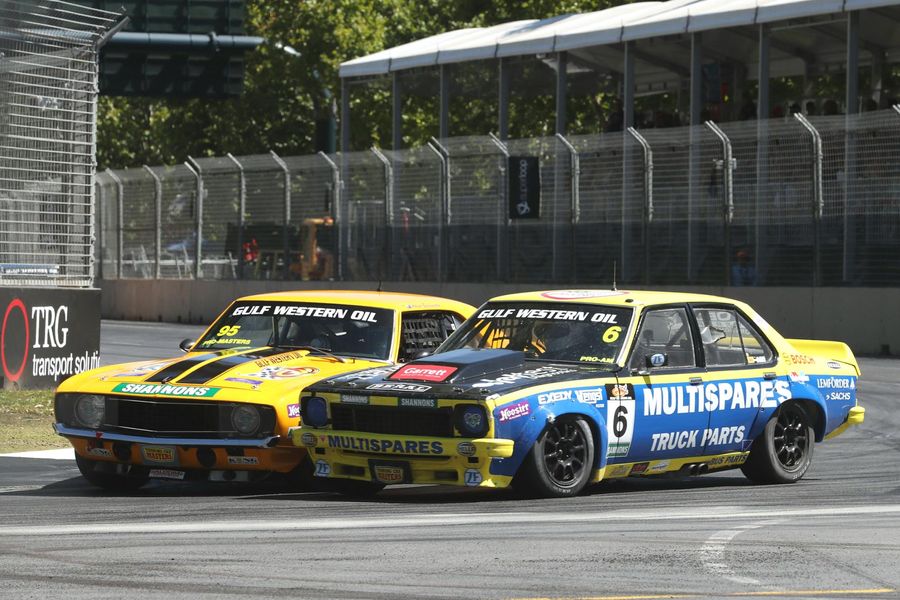 Deep in the sand on Friday, Ryan Hansford rebounded masterfully to win his second Gulf Western Oil Touring Car Masters race on Saturday at the Adelaide 500. Starting 14th, the Multispares Torana was this time able to dodge lap one dramas in today’s second championship race of the season before scything his way through the field towards the front.

Having made up eight places on the opening lap, Hansford had only four racing laps to make up more spots following a Safety Car early in the race. He restarted sixth on lap five and instantly passed three cars, before moving to second on the sixth lap thanks to a move on Jason Gomersall.

He then set about reeling in early leader Adam Bressington, who had led for the duration in his Whiteline Racing Camaro. Hauling in a more than one-second margin, Hansford caught Bressington on the penultimate lap with the pair embarking on a lap-long fight for the lead – often running side-by-side.

Bressington covered his line in the braking zone at the turn nine hairpin however the invitation to go around the outside was too much for Hansford to resist: The Torana sailing the long way around to grab the lead with three corners to go.

It was Hansford’s second Touring Car Masters race victory, his first coming on the streets of Townsville two years ago. Bressington backed up his race one victory with second and leads the round points with one race remaining.

Cameron Tilley improved one place to finish third following a spirited battle for the final step of the podium with a closely-matched group of cars behind.

Like Hansford, Adam Garwood started from the back but was another to carve his way through the field following his race one disappointment – he finished fourth. Steven Johnson was fifth as his Team Johnson XD Falcon continues to improve, while John Bowe went from last to sixth in his Torana.

Jim Pollicina ran third early in the race but found himself on the wrong side of several battles, slipping to seventh at the flag. Markus Zukanovic – who replaced a gearbox overnight in his XD Falcon – was next with Cameron Mason and Dean Lillie completing the top-10.

The race was soured on the opening lap with an unfortunate incident involving two Camaros at turn seven. With the circuit slippery and dusty from an earlier oil spil, the cars struggled for grip in the opening laps and it caused early drama.

A slide from Paul Freestone saw his car fire across the road on the exit of the corner, Ryal Harris’ an innocent victim as he was tagged. The cars each hit concrete barriers on either side of the circuit with each suffering significant damage; both drivers clambered from their cars unaided, though Harris was limping following the incident.

The race was run behind the Safety Car for several laps before restarting, completing nine of the scheduled 10 laps thanks to a speedy recovery by local officials.

The final race of the weekend will see the first of seven Gulf Western Oil Touring Car Masters series rounds decided on Sunday at the Superloop Adelaide 500.