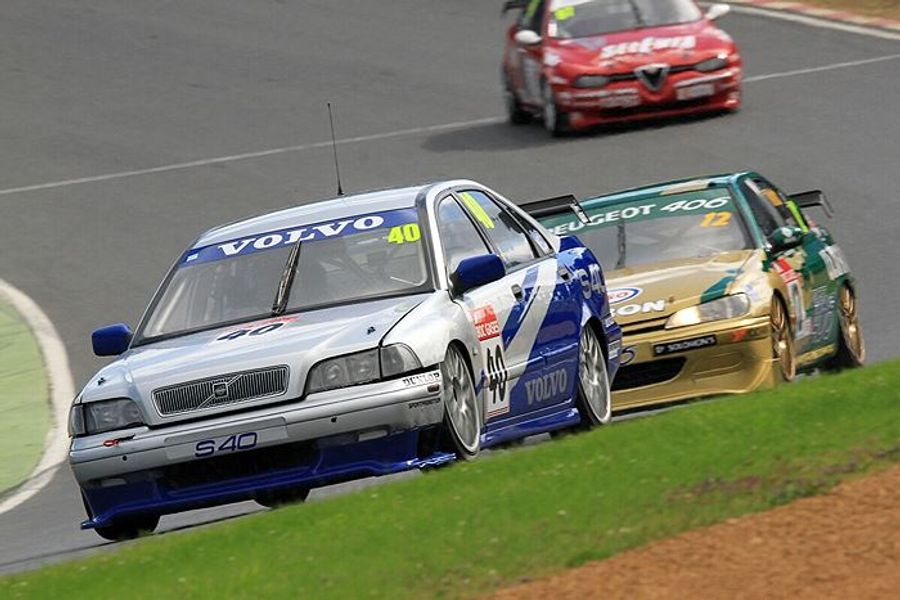 The Historic Sports Car Club’s 50th anniversary race meeting at Brands Hatch (1st to the 3rd of July) was a runaway success with big grids and close racing across three very full days of action on the Grand Prix circuit.
The specially extended three-day meeting, The ‘Legends of Brands Hatch Super Prix’, was one of the biggest in the club’s 50-year history. John Le Sage, one of the competitors in the inaugural Griffiths Formula race in 1966, was the club’s guest of honour for the weekend and presented some of the winners’ trophies.
It was a weekend for multiple wins and the most successful driver was Michael Lyons who won four races in two very different cars. On his debut in the category, Lyons won both races for the Super Touring Trophy in a Volvo S40 and backed it up with a double Derek Bell Trophy victory in his Formula 1 Surtees TS9. The pair of Derek Bell Trophy races ran for the ‘Historic Race of Champions’ award.
Andrew Hibberd was on top form to win three races with a double in the Historic Formula 3 Championship in his ex-Chris Irwin Brabham BT18. Hibberd then added another win in the Formula Junior race for disc-braked, rear-engined cars in his Lotus 22 against a very strong field. As the Formula Junior category continued its Diamond Jubilee celebrations, just on 100 cars competed across three races with other wins going to Stuart Roach (Alexis Mk2) and Chris Drake (Elva 300).
Also double winners were Leo Voyazides and Simon Hadfield who took a commanding win in the GT and Sports Car Cup (AC Cobra) and then won the Pre '80 Endurance race in their Lola T282. They nearly added a third win in the Guards Trophy with their Daytona Cobra Coupe, but were beaten home by less than four-tenths of a second by the Elva Mk7 of Max Bartell and Callum Grant. Voyazides later made it three wins by taking the ByBox Historic Touring Car Championship spoils in his Ford Falcon.
Saturday’s closest finish came in the first race for the HSCC Historic Formula 2 FIA International Series, supported by Berazzi Wheels. A delighted Mark Dwyer (March 742) beat Richard Evans (Chevron B42) by just 0.119s on a damp track. In the dry on Sunday, Evans pulled clear for victory.
Other drivers to take double wins across the weekend were Valerio Leone in his March 783 from a superb field for the Classic Formula 3 Championship and Jon Fairley (Brabham BT11) in the pair of HGPCA races for Pre '66 Grand Prix cars. HSCC Road Sports wins, from strong grids, went to Charles Barter (Datsun 240Z) and John Davison (Lotus Elan).
Andrew Park topped the Historic Formula Ford 2000s by less than a second from URS Classic FF2000 runner Marc Mercer but it was even closer in the concurrent Classic Racing Cars as Dan Pyett (Tecno) beat Andy Jarvis (Palliser) by a fifth of a second!
Finally, after sharing a dramatic Guards Trophy win on Saturday, Callum Grant and Max Bartell headed the Historic FF1600 race that closed the weekend.
Griffiths Formula race in 1966 Brands Hatch The Historic Sports Car Club