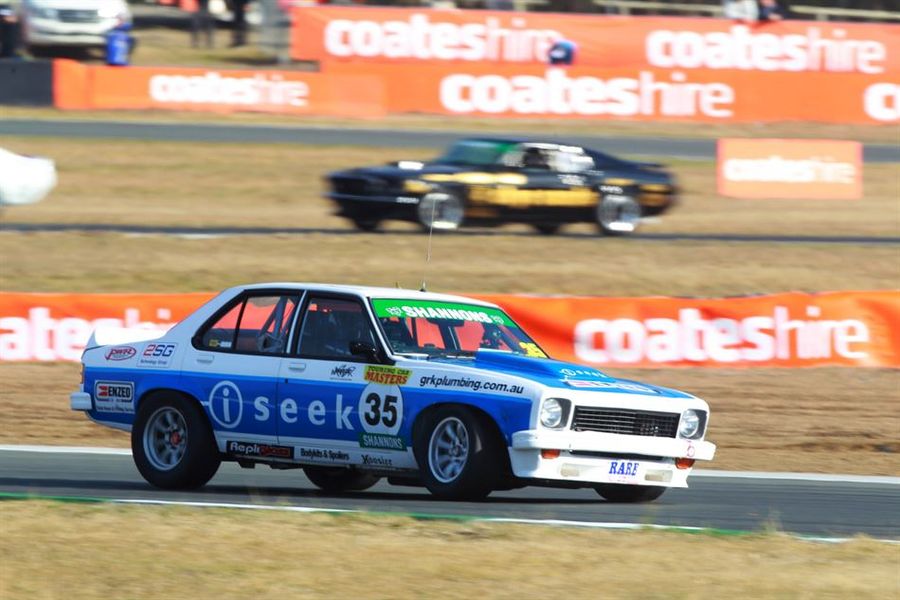 The recent upturn in form for iSeek Racing Holden Torana driver Jason Gomersall has continued into practice for round five of the ENZED Touring Car Masters this weekend at Queensland Raceway.  The Queenslander took advantage of cooler conditions in the first of today’s two practice sessions to bank a stunning 1m16.7840s lap – underneath John Bowe’s existing circuit qualifying record for TCM cars.

The lap not only saw him on top of the practice times for the first session, but hotter conditions later would see that his time held as the fastest throughout the day.  Coming off the back of a strong weekend in Darwin – where he twice finished in the top five and won the ProAm class battle – Gomersall backed up his first session efforts with fifth overall in the much warmer afternoon practice later in the day.

Steven Johnson topped practice two in the Payce Ford Mustang, showing no signs of ill-effects from jet lag despite having just arrived back into Australia following a whirlwind trip to take in the Spa 24 Hours endurance race last weekend.  On combined times, Gomersall and Johnson were split by just 0.2 seconds today with the top five covered by just 0.5s.

It was a strong day for the Queensland contingent, five locals finishing practice inside the top 10 today, including a lockout of first and second place. Michael Uebergang finished fastest of the Queensland TransAm racers that have joined the TCM pack this weekend, just 0.2s faster than Brett Curran.

Uebergang, the brother of Aussie Racing Cars racer Adam, was a last-minute call-up for the series this weekend, replacing John English in the No. 99 Ford Mustang Coupe. Charlie O'Brien had an early end to his second session after pulling off to the side of the circuit early on thanks to a broken throttle cable – igniting a small grass fire in the process.

The Shannons Queensland Tourist Trophy continues tomorrow with qualifying and the first two (of three) races.