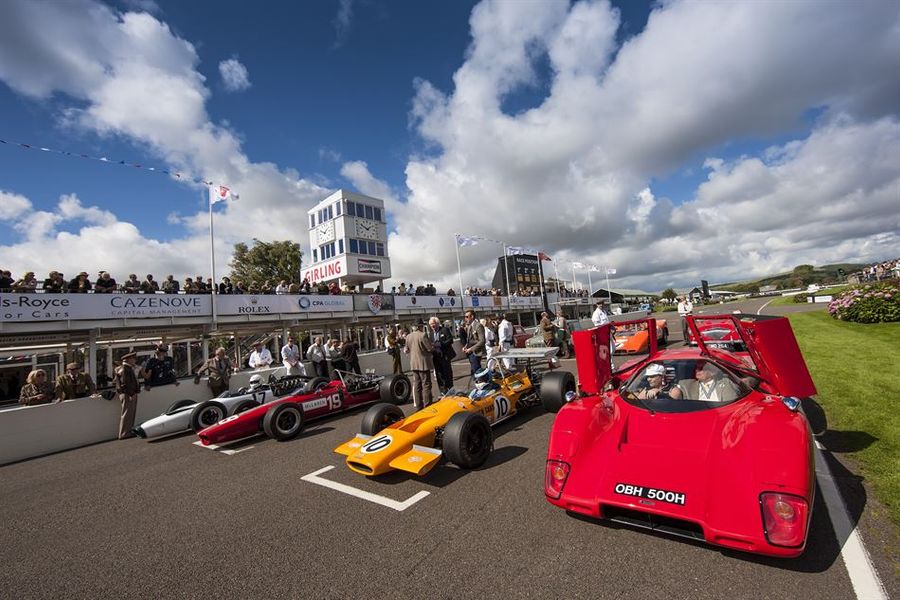 Bruce McLaren was a talented engineer and a world class racing driver,’ observed Lord March at the start of his tribute to the great New Zealander, the Goodwood Revival this weekend celebrating 50 years of the McLaren marque. ‘He was highly-skilled, meticulous and always fun.’

An evocative collection of cars associated with McLaren’s career lapped the Goodwood Motor Circuit today, recalling a career that encompassed four grands prix wins as well as victory in the 1966 Le Mans 24 Hours.

The mighty sports racers that carried his name dominated the Can-Am series and an example of these was included in a line-up that ranged from Formula One Cooper-Climax to the Aston Martin Projects 212 and 214; Ford GT40 to McLaren’s own prototype road car, the M6GT.

Bruce’s daughter Amanda and sister Jan joined a host of Bruce’s friends and colleagues on the grid, such as legendary McLaren designer Gordon Coppuck and forthright team manager Alastair Caldwell.  It was a fitting tribute to one of the sport’s most significant figures.

Saturday also featured a full programme of seven races with part one of the St Mary’s Trophy, for 1960s saloons, one of the most frenetic ever witnessed at a Goodwood Revival.

Nine times Le Mans winner Tom Kristensen blasted through the field from the back of the grid in his mighty Ford Fairlane Thunderbolt to overtake a hectic three-way battle that had been trading places for the lead. The most evocative race of the day must, though, have been the Lavant Cup that, this year, was held for drum-braked Ferrari sports prototypes of the 1950s and which was won by James Cottingham’s 500 TRC from 1957.

The Goodwood Revival is not, though, just about racing and another feature of today was the Bonhams Auction. The highlight was the sale of ‘Blue Lena’, the Bentley S3 Continental Flying Sports Spur Saloon of Keith Richards, which was bought for £763,100, this being the car, named after singer Lena Horne, that carried the Rolling Stones’ guitarist on many a journey.