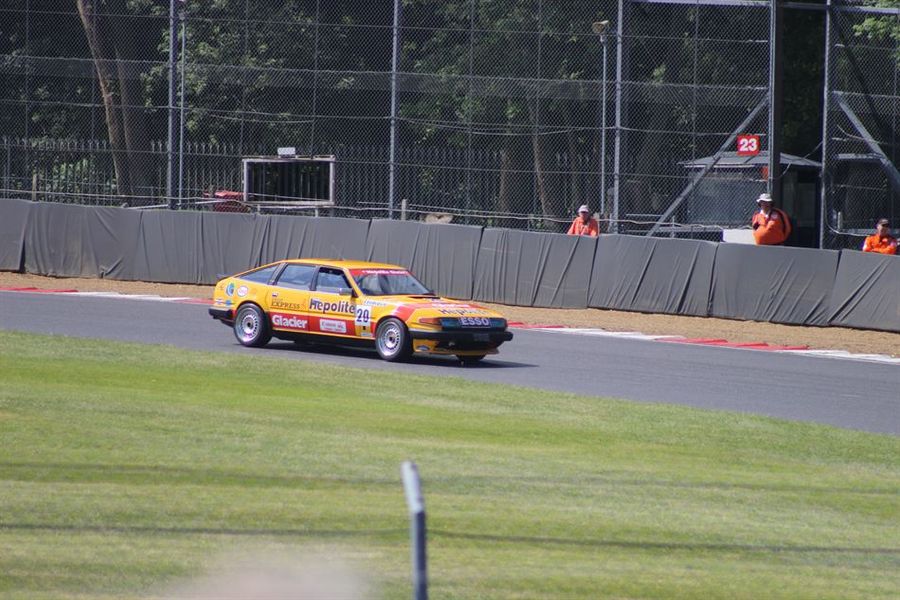 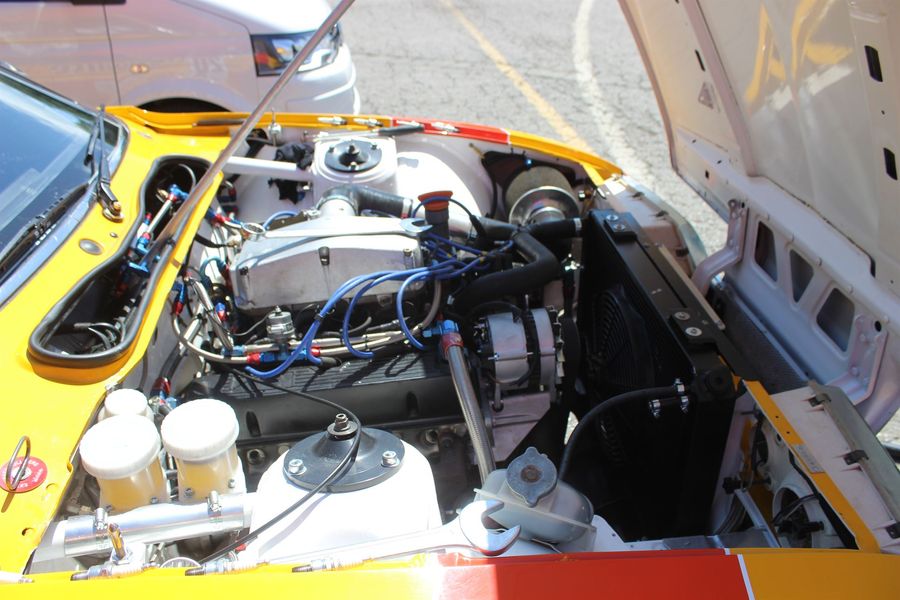 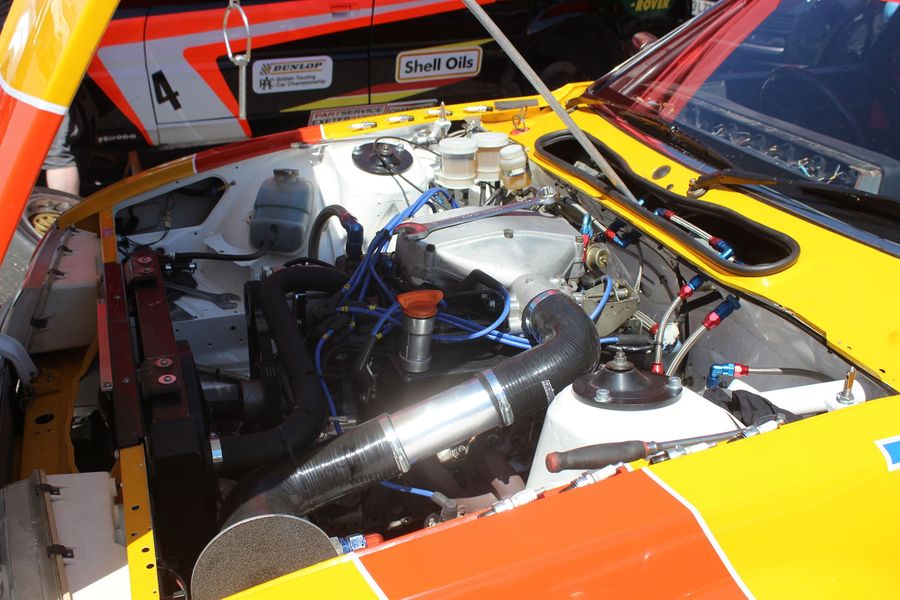 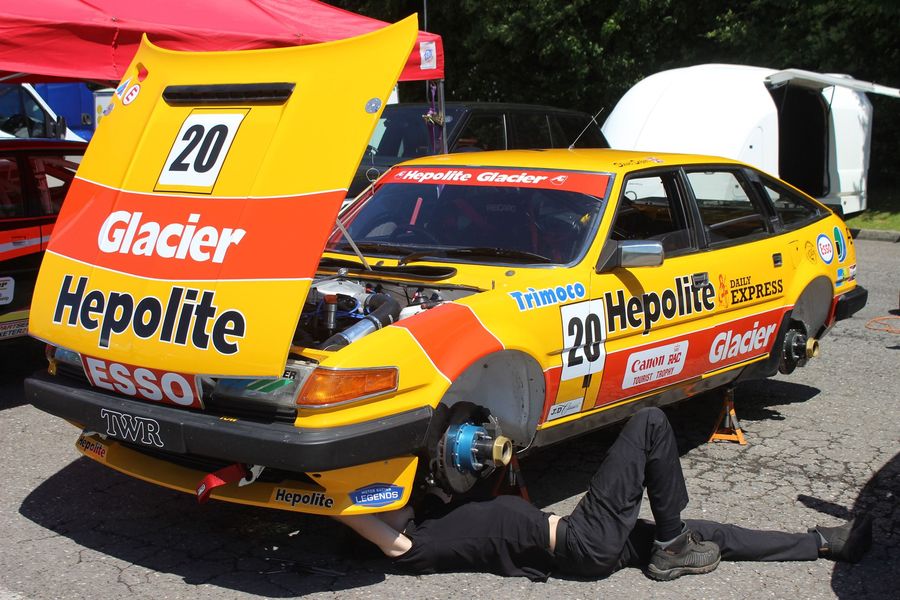 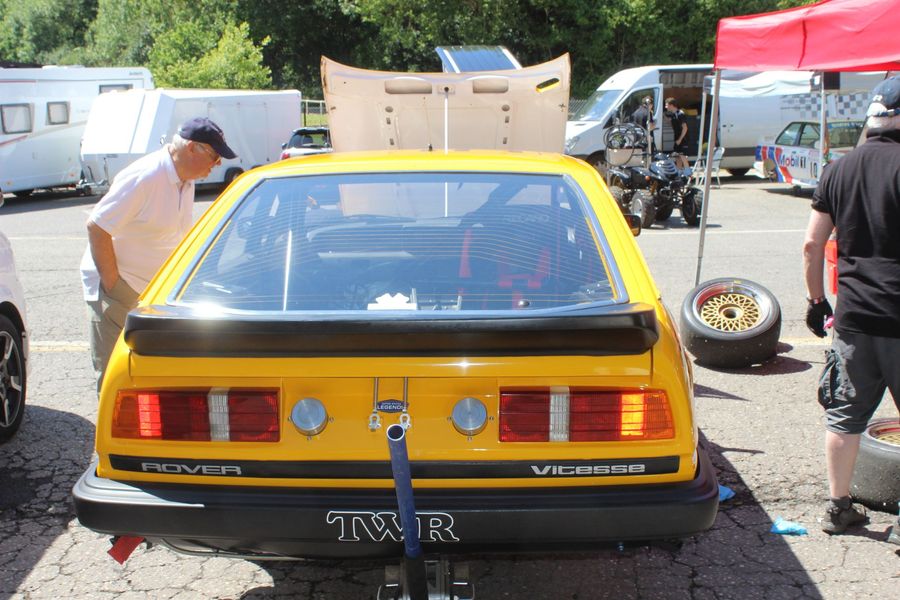 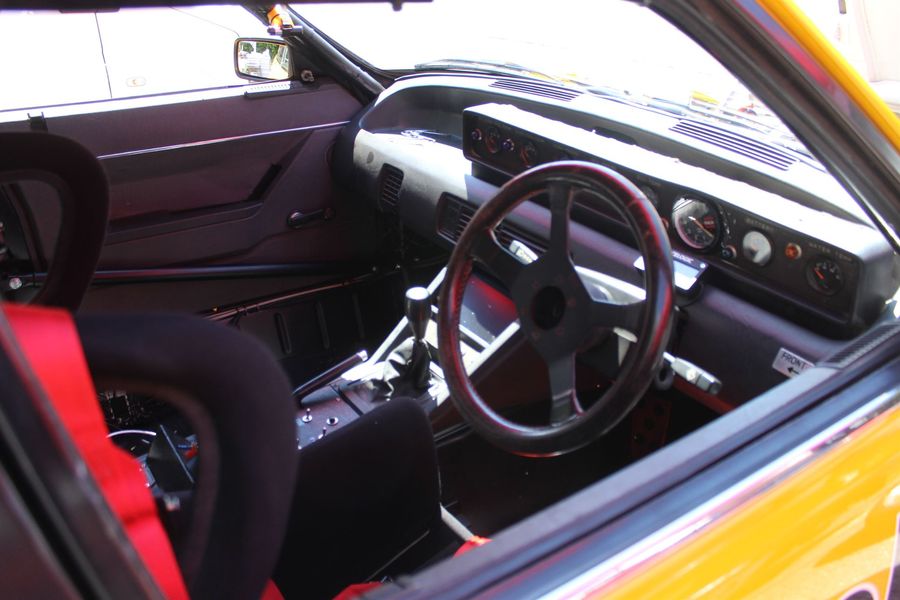 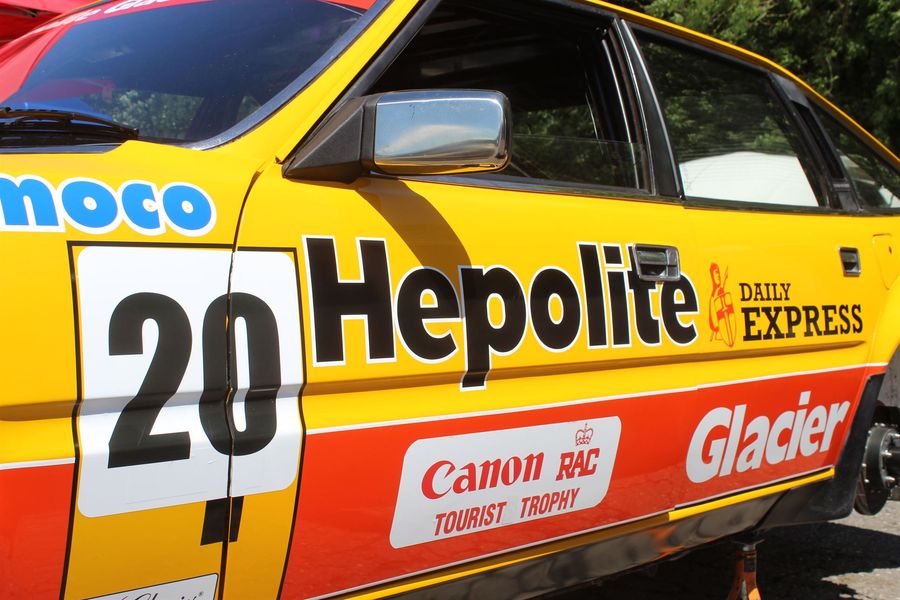 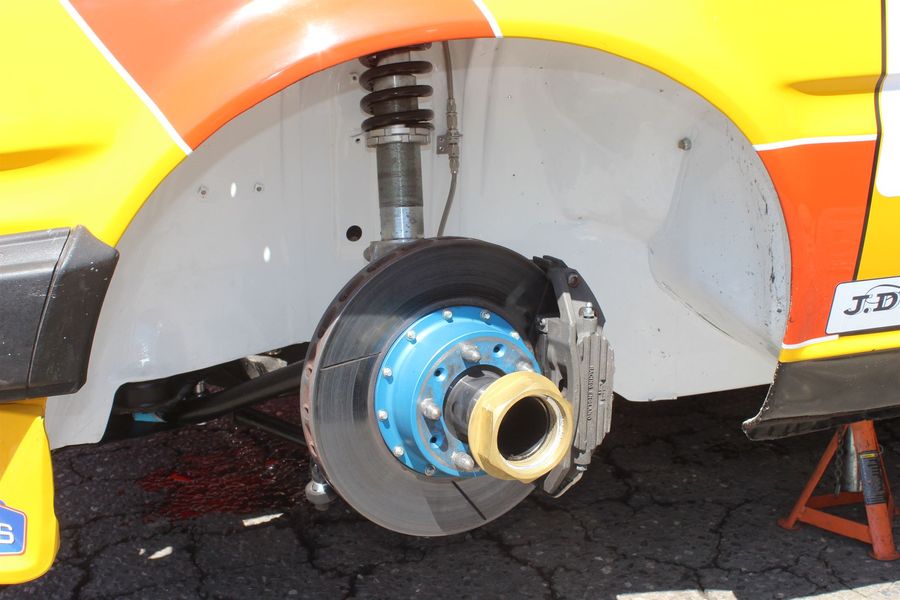 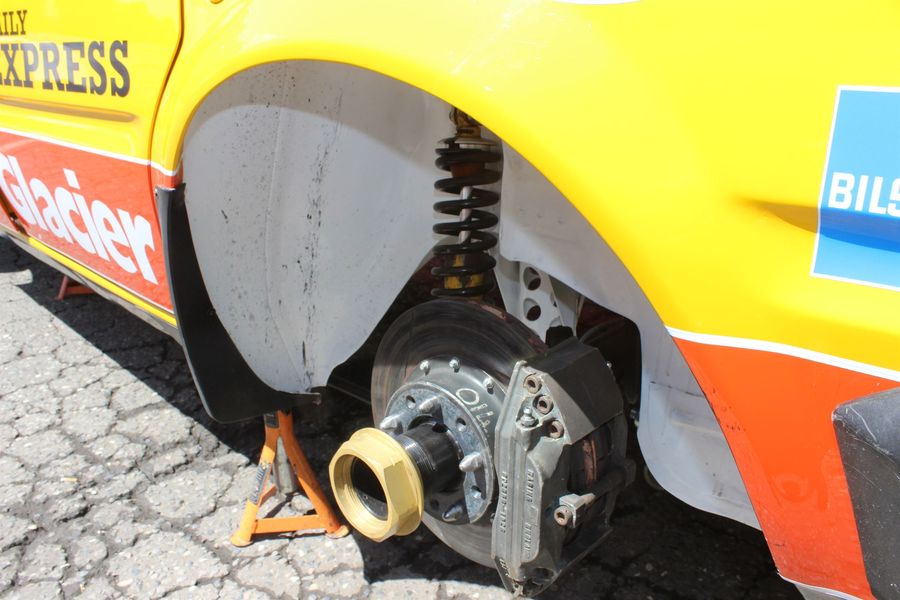 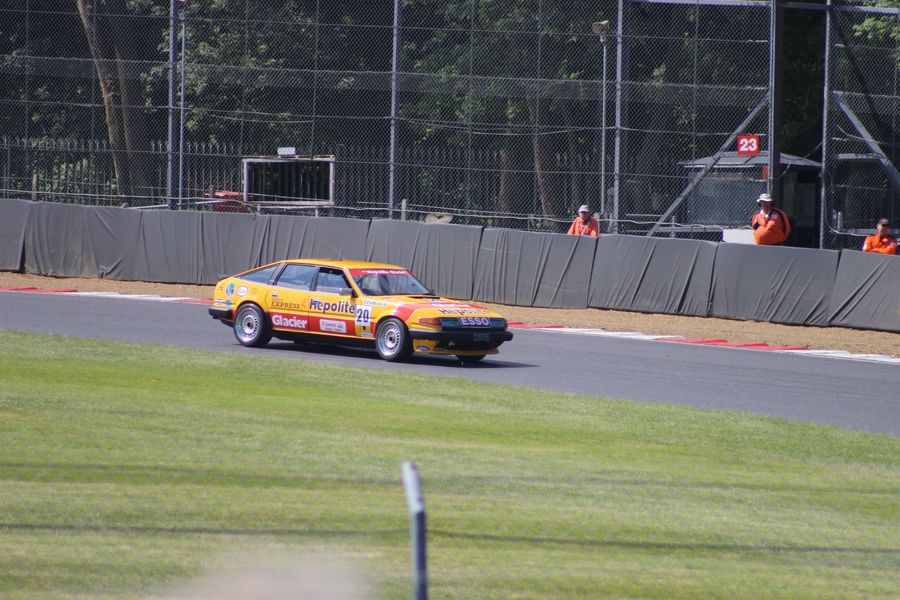 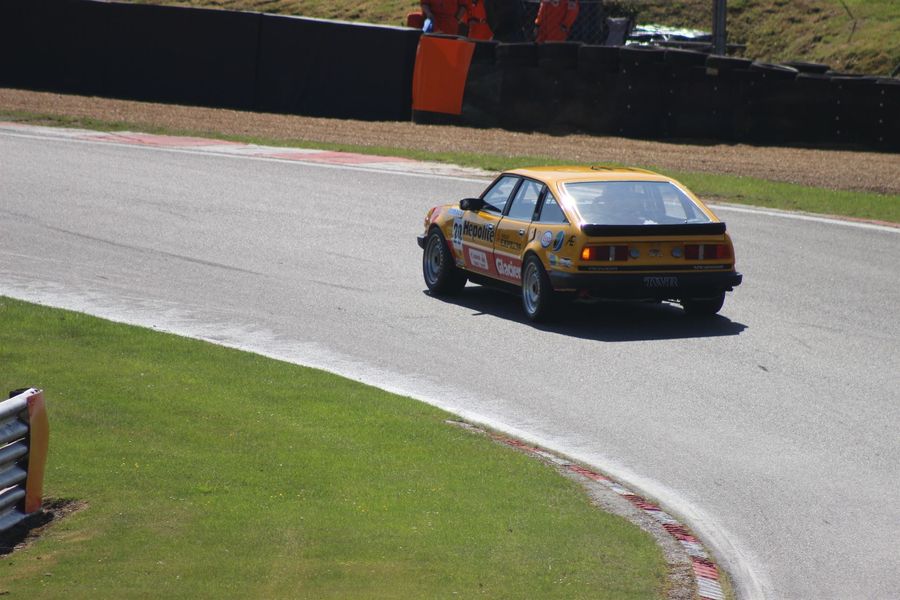 Click on the Gallery tab for images of the Rover Vitesse
A highlight of Motor Racing Legends’ Historic Touring Car Challenge with Tony Dron Trophy race at Brands Hatch was the presence of a yellow Rover Vitesse – the car that won, and then lost the 1983 BTCC title taking the track for the first time in over 30-years. We took the opportunity to chat to Rover expert Ken Clarke, who not only restored the car but had actually built it at the start of 1983 when working for Tom Walkinshaw Racing.
“It is the first outing for the car since 1983,” explained Ken. “I built the Rover in January 1983 when I was working at TWR and it was the first race car I ever built. It was used by Steve Soper and won the BTCC but  lost it again months later on a technicality, and it also won the TT.
“It was always a car that I had wanted to find, and I have looked after half a dozen other TWR cars. I have always stayed connected with the cars, and one day in 2007 someone rang me up and said that a friend of theirs in Holland had an ex-Bastos TWR Rover and said it was the Tom Walkinshaw, Win Percy and Eddy Joosen Spa 240Hours car from 1986. I replied no he hasn’t, and a couple of weeks later the owner phoned me up.
“He asked why I thought his car wasn’t the ’86 car and I said you don’t have it as they built five of those cars and I knew where they all were. He asked what car he had then, bad I said I didn’t know but scrape some paint off and see what it is underneath. It was grey and we hadn’t run a grey car, but he sent me some pictures and I started thinking that I recognised bits of the car.
“I could see that some of the parts were parts I had built, but I said I still wasn’t sure what car it was – it could be one of three or four different cars, or a very good copy. I offered to go over to Holland and have look and confirm what he had -  for a price. He didn’t want to pay so I then said that if he was interested in selling it anytime to let me know.
“A year later I asked if he still had the car but he said he didn’t want to sell, and I did the same in 2009, 2010 and 2011. The final year my father had died and left me a bit of money so I called him again and this time he said it might be for sale. He said to make him an offer - and justify it.
“One had just changed hands the year before – chassis 19 – for £60,000, so I sat down and worked out what it would cost to restore it, remembering you would have to fabricate pretty much everything. It came to £67,000 as it was just a rolling shell, and it was going to be only worth the £60,000 when complete. But I offered a price, and he said ok! So I rushed over to Holland and picked it up and brought it back.
“We painted it in 2012, and then one of my customers bought chassis no 1, by this time we had realised we had chassis number 2, and both had been used show cars and needed rebuilding. As I had two to do it justified making all the parts, and in fact we made five sets of everything.
As time and money allowed we started bolting the car back together, and it were little things that I remembered doing myself. On the dash there is a little plate that says brake balance Front/Rear. Most of the mechanics would write F and R with a trye marker pen buT I thought that looked horrible so I got a little aluminium plate and polished it up, then got the sign-writer to write it up and engraved it TWR 002, and it is still there.
This car means a lot to me, I drove it once before at Oulton Park in 1983, and very nearly smashed it up. Steve Soper had finished third in the race and the three Rovers were on the grid after the race and we got in them to dive them back round the lap. I was third in line, came out of Deer Leap with my foot on the floor to find out we turning a sharp right off the circuit and it was a whhoooo…. moment!
“The second time I drive it was Tuesday last week and the next time in qualifying today. There is so much more time in the car, my intention was to just do track days and fun things like that maybe the Festival of Speed if I got an invite. We didn’t get asked there so I was looking for something to do so I asked Duncan Wiltshire if we could bring it here and he said he’d love to have us here.
“At the moment this will be a one-off, our priority has to be running our customers, we can’t run five other cars and this one.”
The TWR cars dominated the 1983 BTCC season winning every race, with Steve Soper taking the title with five wins from 11 races. A rival then protested the legality of the car, and TWR counter protested the BMWs, and it was only months later that RAC finally adjudicated against the Rovers and Soper lost his short-lived title.