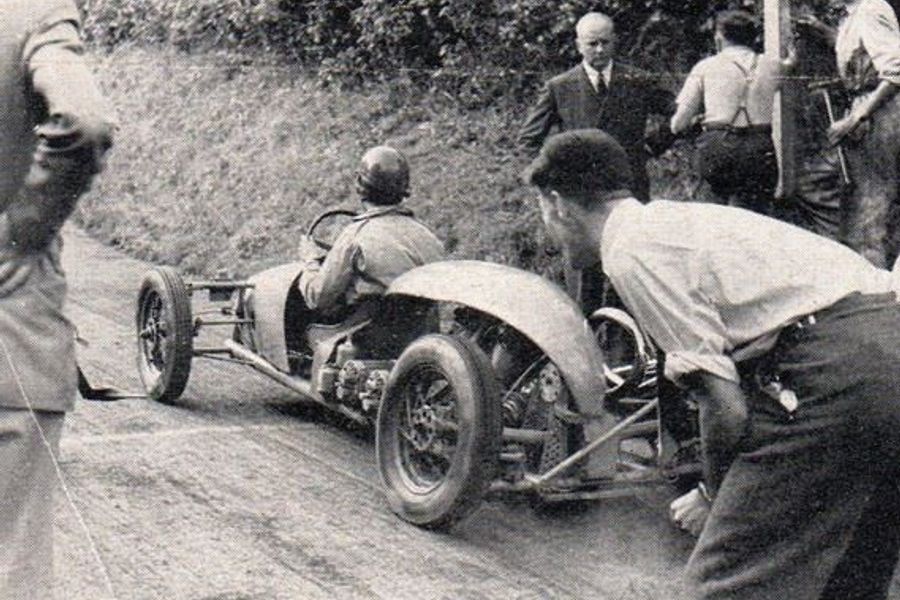 A highlight of the VSCC's weekend race meeting at Prescott was the sight of the Freikaiserwagen running up the hill, eighty years fter th ecar ha staken Faestest Time of the Day and the cllub's very first meeting at the venue in 1938. Having been rebuilt by current owner Steve Lister with help from Mike Sythes, the car recodred a time of 50.54s - almost three seconds slower than its 1938 time! Click on the Video tab to see the car leave the start line.

The Freijaiserwagen was built as a sprint and hill-climb car by David Fry and Dick Caeser in 1936, and was very much the classic 'specia;', featuring a G.N chassis and suspension from a Morgan, all powwred by a vee-twin Anzani engine. The driver sat in front of the engine, which featured dramatically curving exhaust pipes.

Fry's cousin Joe was the brave man who drove the car, which became even more fearsome after a 1937 rebuild saw an 1100cc Blackburne race engine installed. Built for record-breaking, the enhine ran on alcohol fuel and dleivered around 70BHP, with behind Joe's head was now a curved furl tank or aero section. The moficitaions made the the lightweight Freikairserwagen prone to oversteer, it running on the biggest rear and the smallest front profile tyres the builders could source in order to try to provoke a semblence of understeer.

Amazingly, the decsion was made that the car needed more power, so the engine was supercharged, and by 1939 the car was was a front runner in the British sprint and hillclimb scene, but part way through the year Joe had a big accident in the car and then World War II saw all racing activity cease.

After the war th ecar was rebuilt, with the same chassi and a set of Morgan suspension from the Watkins-Nash, another special. Robin Jackson, who has supplied the Blackbourne back in 1937, had stayed involved and with the engine now delivering more than 100BHP undertook a programme of strengthening internal compeonents and some engine redesign.

Ever keen to improve the car it changed again in 1949, the chassis being replaced with a tubular one originally designed by Caeser for a Formula Three car. Once more the negine was upgraded, now bearing little relation to the one slotted into the car pre-war, now with two-stage supercharging and delivering 120BHP, in a car weighing just 600lbs (272kgs).

Still a match for anything else on the hills, the Freikaiserwagen broke the Shelsley Walsh record in 1949, but when Joe Fry fatally crashed it at Blandford in 1950 the car was put away, David Fry not having the heart to rebuild it.

The car reappeared in the 1960s, and the recent bebuild has now restored it to competitive condion.