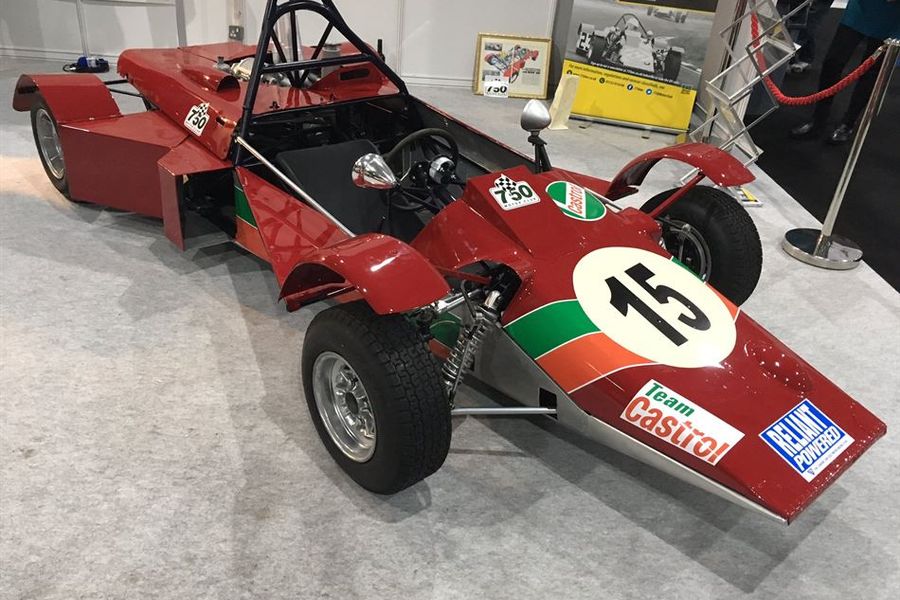 After a busy three days at last month’s Race Retro 2017, the iconic 1973 Championship winning 750 Formula car ‘The Warren’ was brought back to life in its original form, after significant efforts from current owner Ron Welsh.
The car rolled in as an almost bare chassis on the Thursday before show opening, and by mid-afternoon on Sunday the car was complete, save for minor wiring and plumbing. All the details were carefully covered in a detailed pre-show restoration; from period graphics and paint, to the reclamation of as many original panels and details as possible. Virtually all of the original aluminium body was retained and restored with careful welding, and the only nod to development was to use a toothed belt drive in place of the original chain – the one component that had always suffered from a reliability perspective on track.
Ron was assisted throughout the show by his son Kevin, who will be getting behind the wheel of the unique car when it takes to the track later this season. The Warren will be competing in the newly re-launched ‘Historic 750 Formula’, which celebrates its ties with one of the world’s oldest formulae yet also highlighting the series itself as the most cost effective route into historic circuit racing. The Warren is spearheading a drive to bring all the missing 750 Formula cars out of retirement and back to the track.
‘The Warren’ was designed for 750 Formula by Jerry Evershed, and had instant championship success in the hands of Robin Smyth. The infamous design was distinguished by extra-long front radius rods and four vertically-protruding exhaust pipe stacks.
The car won the 1973 championship, taking five lap records along the way. After the tragic early, unrelated deaths of both Smyth and Evershed before their 40th birthdays, the original Warren made few reappearances before a long lay-up period.
The Warren is powered by a Reliant side-valve four-cylinder; recently introduced by the 750 Motor in the Formula. Smyth and Evershed supercharged the 747cc Reliant and cast their own cylinder head. The powerplant was canted over at 25 degrees and offset to the left to balance the driver, as well as being reversed front to back, utilising a chain drive from the engine to a propshaft running alongside - a live axle was a requirement of the regulations.
750 Formula The Warren Race Retro

Race Retro Rebuild for 'The Warren'