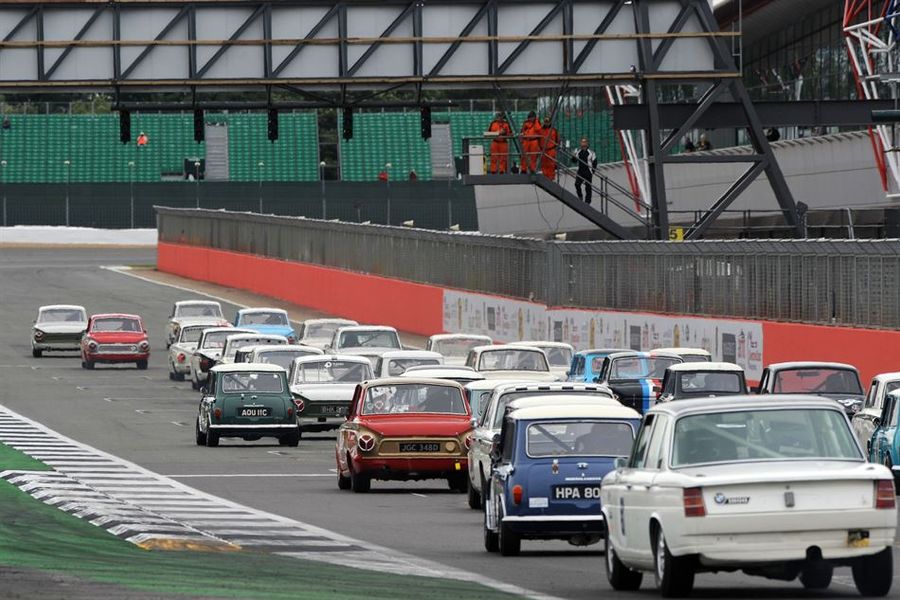 This year’s Silverstone Classic (20th-22nd July) will celebrate the 60th anniversary of one of the country’s most popular, prominent and enduring race series – the MSA British Touring Car Championship – with its biggest-ever homage to racing saloon cars.
Working closely with TOCA – the organisation which has been the driving force behind the BTCC for nearly half the series’ history – the world’s biggest classic motor racing festival is planning to honour the diamond jubilee in style. A number of exciting announcements ­– including some promoting the current series, which continues to flourish with live TV coverage and record grid numbers – are planned for the coming months.
The first of these is the return of ‘Tin Top Sunday’. Staged only once previously in 2016, Tin Top Sunday – on Sunday, 22nd July – will be a must for touring car fans of all ages, with the action-packed race programme featuring no fewer than four races for iconic BTCC cars from bygone eras. Close to 200 of the BTCC’s most illustrious machines will be reliving their glory years on the full Silverstone Grand Prix circuit, many raced by past and present BTCC legends.
Ensuring the maximum spectrum of the epic championship’s 60-year history is showcased, the selected grids will put the spotlight on four very different generations of bumper-to-bumper entertainment.
Turning the clock right back to the early sixties, the ever-popular Under 2-litre Touring Cars (U2TC) grid is a competitive contest featuring Alfa Romeo GTAs, BMW TiSAs, Lotus Cortinas and hordes of giant-killing Mini Coopers. Highlighting its status, multiple BTCC champions Matt Neal and Gordon Shedden teamed up to win this rousing race in 2015.
While the BTCC’s formative seasons were dominated by sporty versions of locally produced European saloons, by the mid-sixties, mighty American V8 muscle cars had come, seen and conquered. It is a thunderous epoch perfectly represented on the ‘Tin Top Sunday’ bill at the 2018 Silverstone Classic by the return of the Trans-Atlantic Touring Car Trophy – fans can look forward to a massive 50+ car grid laden with Mustangs, Galaxies and Falcons.
By the mid-seventies, the Yank Tanks had been outlawed and in their place, BTCC grids were filled with Capris, Rover Vitesses and smaller-hearted speedsters such as the Triumph Dolomite Sprint, Alfa Romeo GTV and BMW M3. All these icons – and many more – are included in the exciting Historic Touring Car Challenge (HTCC), which makes a very welcome return to the Classic roster after its spectacular debut in 2016.
Adding to the retro drama, the U2TC, Trans-Atlantic and HTCC close encounters will all include a compulsory mid-race pit-stop and optional driver change.
Completing the BTCC diamond jubilee story will be double-header rounds of the JET Super Touring Car Trophy, putting the spotlight on the high-tech tourers from the nineties when, for many, saloon car racing reached its absolute zenith.
“These four evocative grids on Tin Top Sunday will be a wonderful tribute to 60 memorable years of great fender-bending BTCC action,” said Nick Wigley, CEO of Goose Live Events, organiser of the Silverstone Classic. “The BTCC boasts an incredible history of thrills and spills stretching right back to 1958 and in its diamond anniversary year we are excited to be celebrating its unrivalled provenance both on and off the track at this summer’s very special Classic.”
Adding further to the celebrations, a large number of past and present BTCC star drivers will be joining the party. Indeed, many notable touring car aces have become regular competitors at the Silverstone festival and fans can expect a bumper turn-out in 2018.
Those revving up in recent years have included past champs Neal, Shedden, John Cleland, Tim Harvey and Colin Turkington as well as tin-top legends such as Jeff Allam, Gianfranco Brancatelli, Rob Huff, Jim Richards and Steve Soper.