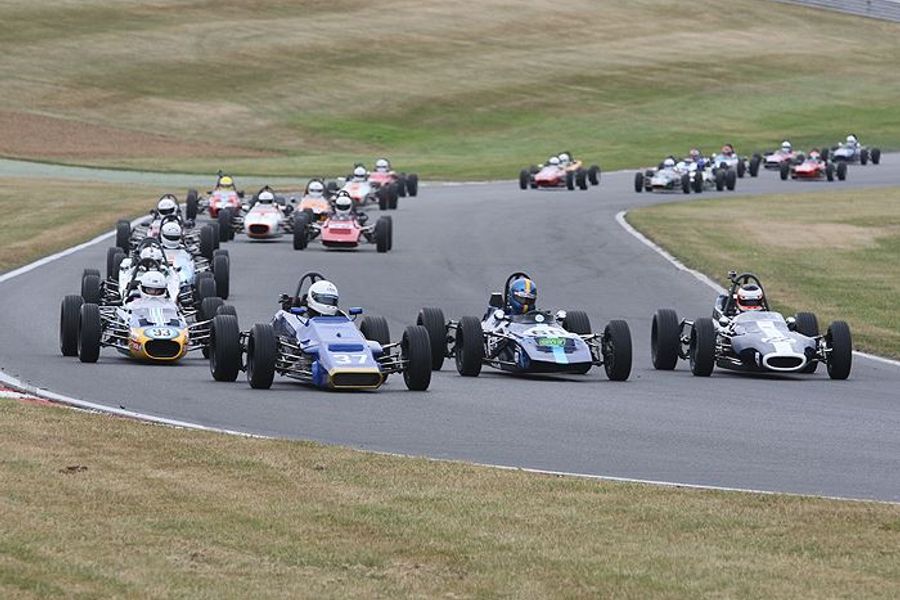 A raft of Formula Ford stars from 50 years of the category will be on hand when the Historic Sports Car Club hosts the category’s 50th anniversary celebration at its Brands Hatch Grand Prix circuit meeting on 1st/2nd of July.
The call for former Formula Ford champions to be guests at the event has already received a tremendous response and among those planning to attend are Kenny Acheson, Damien Magee, Tony Trimmer, Richard Robarts, Gerrit van Kouwen, Gareth Rees, Ray Allen, Andy Ackerley and Jason Elliott.
The HSCC is marking 50 years of Formula Ford with a range of celebrations this year and the Legends of Brands Hatch Superprix meeting is the focal point of the season, as the inaugural Formula Ford race was held at the Kent track on 2 July, 1967.
As well as four races for more than 60 competitors in the HSCC Historic Formula Ford Championship, the weekend will feature a past champions’ photo call, a grid walk-about and a Formula Ford-themed reception and buffet on Saturday evening.
Kenny Acheson was a triple Formula Ford champion in 1978 as he dominated the season in a Royale RP24, while Jason Elliott was a double champion in 1986 for the works Van Diemen team. Gareth Rees was the dominant force in the 1990 season with a works Reynard and ended the season as the McLaren/Autosport Young Driver of the Year.
Dutch ace Gerrit van Kouwen was a leading racer in the UK and also won the Benelux and EFDA titles in the early 1980s, while both Damien Magee and Richard Robarts raced in the early seasons of Formula Ford before going on to reach Formula 1.
Andy Ackerley is well known to Brands Hatch fans as a Formula Ford ace at the Kent track and won the Champion of Brands title in 1982. Another local star is Tony Trimmer, who was one of the few drivers to race a Brabham in the early years of Formula Ford. That car is likely to be on the grid at Brands Hatch in the hands of Michael Grant-Peterkin. Meanwhile Ray Allen was the winner of the very first Formula Ford race at Brands Hatch on Sunday 2 July, 1967.
More than 30 championships for Formula Ford 1600s have run over five decades and it is planned that the celebration will also include winners of the Formula Ford Festival, the Walter Hayes Trophy and the Castle Combe Carnival.
Any more drivers with a Formula Ford title under their belt are invited to contact the HSC