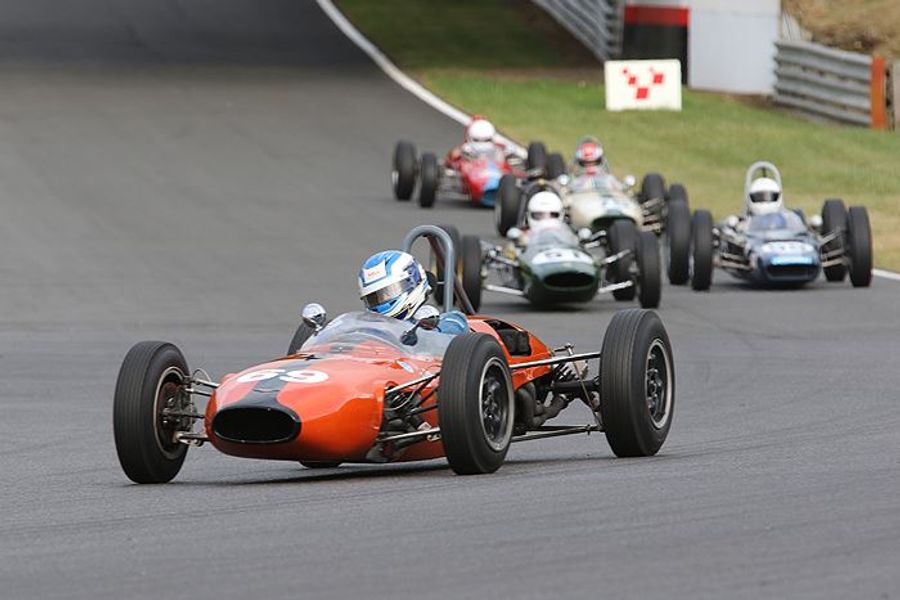 A record entry of 120 Formula Junior single-seaters is the target for the Historic Sports Car Club’s 50th anniversary race meeting on the Brands Hatch Grand Prix circuit this summer (1st to the 3rd of July).
The event is part of the three-year Formula Junior Diamond Jubilee World Tour, which builds to a conclusion in 2018. The weekend will include three races for Formula Juniors covering front-engined cars, rear-engined drum-braked cars and rear-engined disc-braked cars. The three grids will have capacity for 114 cars in total.
Category prime-mover Duncan Rabagliati says he wants to attract the biggest-ever gathering of Formula Juniors. “The plan is to get well over 100 cars and the target is 120,” said Rabagliati. “We’ve never had that many cars running at one event before. We had over 90 cars at Brands Hatch in 2008 for our Golden Jubilee and everybody wants to do this meeting.”
As well as three capacity grids of cars, Rabagliati wants to make the whole weekend a celebration of the single-seater category that ran from 1958 to 1963, spanning the era when racing cars went from front to rear-engined designs.
“We’re inviting Formula Junior drivers form the category’s original period and also drivers who have raced in Formula Junior since the class was recreated as an historic category in 1975,” said Rabagliati, who says that Juniors are still being discovered. “We’re still finding cars in barns and some of them have not been used for decades.”
HSCC Chief Executive Officer Grahame White said: “We’re delighted to have Formula Junior as a major element of the event and also to be part of the Formula Junior Diamond Jubilee World Tour. There are very strong links between the HSCC and Formula Junior.”
The Brands Hatch Grand Prix circuit meeting has been a highlight of the HSCC calendar for the last 26 years and is an opportunity for club members to tackle the wonderful layout which remains relatively unchanged since it opened in 1964. In 2016 the meeting will expand to three days thanks to the support of circuit owner Jonathan Palmer.
Historic Sports Car Club Formula Junior single-seaters Brands Hatch Grand Prix circuit Formula Junior Diamond Jubilee World Tour