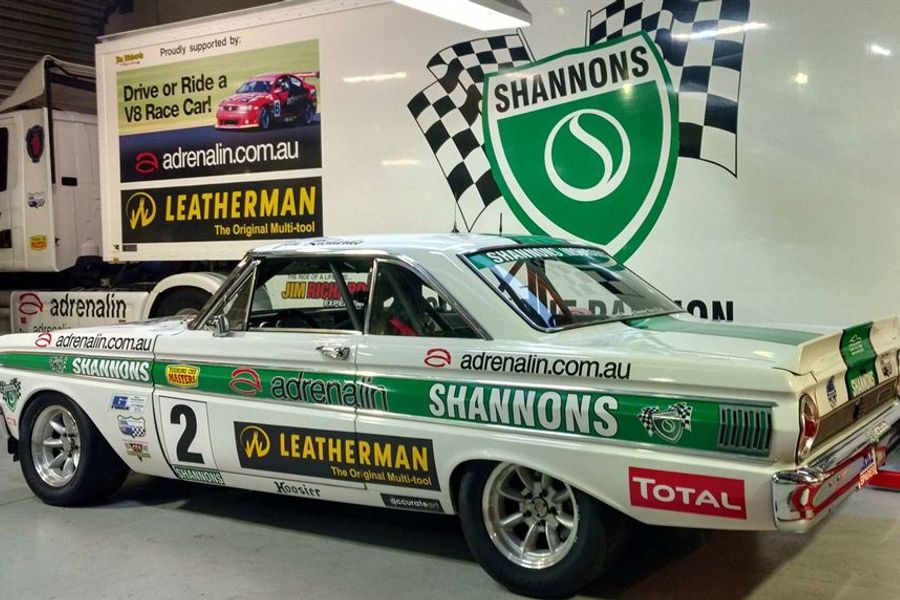 Jim Richards will unveil an upgraded Ford Falcon Sprint when he returns to his title-winning ride at the fifth round of the Touring Car Masters series this weekend in Queensland. With his Shannons Insurance AMC Javelin garaged for repairs and maintenance, Richards has upgraded his famous 1964 Falcon with a 302-cubic inch Ford V8 and several other developmental pieces designed to make it go even quicker.
He’s set to run the popular Shannons-backed Ford for the remainder of the season and is looking forward to getting it back on track, starting at this weekend’s Supercars Coates Hire Ipswich SuperSprint.
“It is very popular and every round I have people coming up to me and asking ‘when is the Sprint coming back,” Richards said. “We’ve gone up to a 302 from the 289 and the car has had a complete rebuild – the gearbox, diff and we’ve been through basically every nut and bolt. It’s good to go.
“We could have raced the Javelin, but the Sprint was good to go so we’ll run that and the intention is to run it for the rest of the year.”
Richards’ believes the car will be quicker than ever – but maintains enjoying his racing remains the overall objective.
“It will be quicker but it will still be a big ask to go against the Torana’s,” Richards added. “As well as the engine, I’ve been allowed to add a front spoiler and a small rear wing which should make a difference – and the car actually looks really nice.
“I’m not worried about winning - as long as the car is competitive I’ll be happy.”
The revitalised Falcon should be a strong contender in Queensland, given its track record at the venue: In Richards’ hands, the Sprint won the inaugural QR TCM round in 2009 and was a race winner again in 2013. Richards will be part of a strong 26-car grid contesting the Rare Spares Ipswich Tourist Trophy round this  weekend.
Home-town hero Steven Johnson heads to the circuit in the best form of his Touring Car Masters season, having won the most recent round held at Hidden Valley Raceway in Darwin. The top-end success behind the wheel of his Synergy Race engines Falcon GTHO drew him to within nine points of series leader John Bowe heading into the second half of the season.
Johnson won the 2015 round at Queensland Raceway, scoring pole and three race wins driving Bowe’s Ford Mustang.
Just 72 points split first through fourth place in the ProMaster standings heading into the second half of the season, Bowe and Johnson trailed closely by Eddie Abelnica and Glenn Seton in their flying Fords.
Abelnica scored his second podium of the season in Darwin, while Seton scored his second, second-place overall effort in his Thunder Road Racing Team Mustang and will like his chances for an overall round victory at the 3.1km, six-turn Queensland circuit.
iSeek Racing Holden Torana A9X driver Jason Gomersall will continue his search for an outright race victory at his home track, fresh from another strong performance in Darwin.
Gomersall will be counting on the local knowledge he and his Matt Stone Racing outfit possess at QR, the team having tested several times at the venue whilst developing the stunning HDT-liveried Torana prior to its racing debut at Winton earlier this year.
Another contender could be Adam Bressington, who will make his return to the series driving the Whiteline Racing '69 Camaro raced in Darwin by Bob Middleton.
The New South Wales driver raced in TCM between 2012 and 2014 including a competitive 2013 season racing a HQ Monaro GTS 350.
Bressington has a trio of top-three race finishes to his credit, including a personal best of second outright in the second of three races at Bathurst in 2013.
An expanded Queensland grid includes the return of several Touring Car Masters regulars, some of them for the first time this year.
Local TransAm series racer Brett Curran will compete in his 1967 Ford Mustang, as will fellow local Grant Wilson in his 1968 Camaro, while Allan Boughen will return his incredible 1963 Mercury Comet to the series for the first time this year.
Meanwhile, four IROC Challenge Porsche 911 RSs will re-join the TCM grid: Sven Burchartz, Greg Keene, Rory O’Neill and Rohan Little all familiar faces to the series.
Popular racer Cameron Tilley will miss the round following their Darwin engine dramas: The Sydney-based team now working on a new powerplant for the ‘world’s fastest Pacer’.
Falcon GTHO racer Wayne Mercer will also be forced to miss the Queensland round, despite scoring his maiden TCM race victory in Darwin’s Waeco Trophy race. Due to business commitments and repairs to his GTHO.
Jim Richards Touring Car Masters Ford Falcon Sprint Queensland