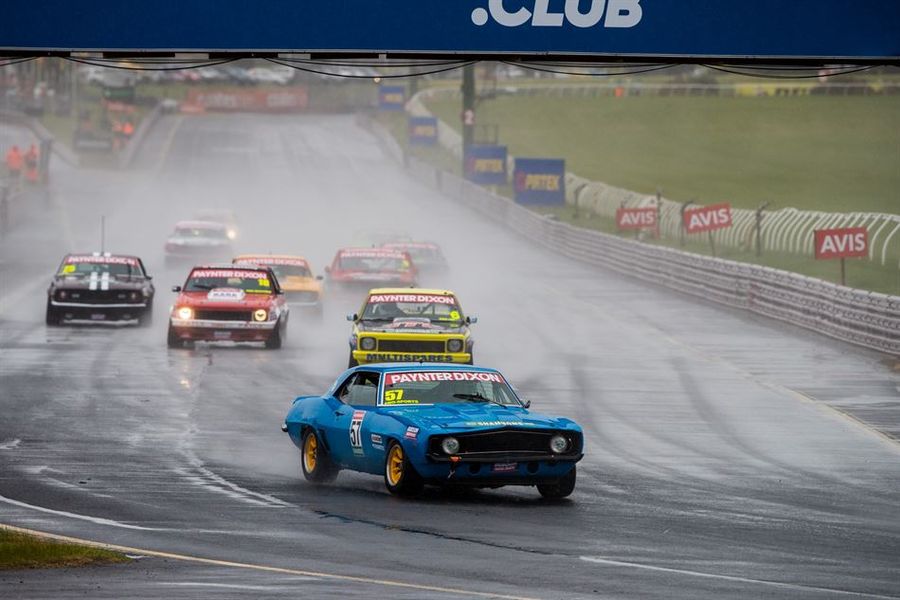 Steven Johnson has charged back to the top of the Paynter Dixon Touring Car Masters standings, as John Bowe was caught out when the rain came to Sandown on Saturday. Johnson, who started from pole, won the 16th race of the championship season this afternoon, a 10-lap dash that started dry but was interrupted when the rain came with four laps to go.

Bowe was trailing the Team Johnson Mustang at the time, but when the downpour came was caught out by the wet conditions and spun into the gravel trap at turn eleven – where he remained bunkered for the remainder of the race. In the dry conditions of the first six laps, Johnson fended off Bowe early on before pushing ahead to build a semi-comfortable margin.

He re-set his own Sandown lap record on the third lap and was in a commanding position to drive conservatively when the rain fell. It was Johnson’s 11th win of the season and third straight at Sandown.

When Bowe spun out, Adam Bressington and Jason Gomersall battled for the final spot on the race podium in an entertaining scrap for third. After Gomersall held second initially, the pair swapped positions before the fight ended when the Whiteline Racing Camaro was able to edge out the BigMate Torana in a drag-race to the line.

Marcus Zukanovic finished fourth on the championship debut for the XD Falcon, though was a beneficiary of an error by Ryan Hansford who had a half-spin at turn four when the rain came, dropping from fourth to fifth. Tony Karanfilovski finished sixth, with Paul Freestone, Jim Pollicina, Mark King and Jamie Tilley completing the top-10, the group of five cars covered by a tiny margin.

Later in the afternoon, Race 17 of the championship was declared a no-race following a heavy crash on the opening lap at turn six. Marcus Zukanovic made heavy contact with the tyre bundles, heavily damaging the car and the wall. The car had made a stunning start and was running third at the point of the accident on lap one. The driver was unscathed and the team is already planning to rebuild for Bathurst - however the fence repairs were going to take too long; the race declared a non-event for just the fourth time in series history.

Earlier, a chaotic Dometic Trophy Race ended with Dean Lillie winning for the first time, just under 10 years since his last start in the category. The race was held in wet conditions and only ran for three laps after the initial start was waved off after the field went well before the control line.

On the restart, pole sitter Jim Pollicina flew away from the field and build a massive 10-second margin over the field, ultimately taking the flag first. However, race officials deemed his start to be too good – penalising the Torana driver 20 seconds for a false start which relegated the Sydneysider to third. Pollicina’s penalty elevated his teammate Lillie to the victory, his first in the category.

He becomes the third, first-time winner this season and the seventh of the year. It was also the first race win for a HQ Monaro since the 2014 season. Leo Tobin finished fourth and Mark King fifth, while John Bowe stormed from the back of the field to sixth position.

Early withdrawals included the Anglomoil Valiant Pacer of Cameron Tilley, who had pushrod issues yesterday and elected to withdraw the car rather than risking further damage to their new engine. Damien Gambold also withdrew prior to the trophy race following their issues yesterday.