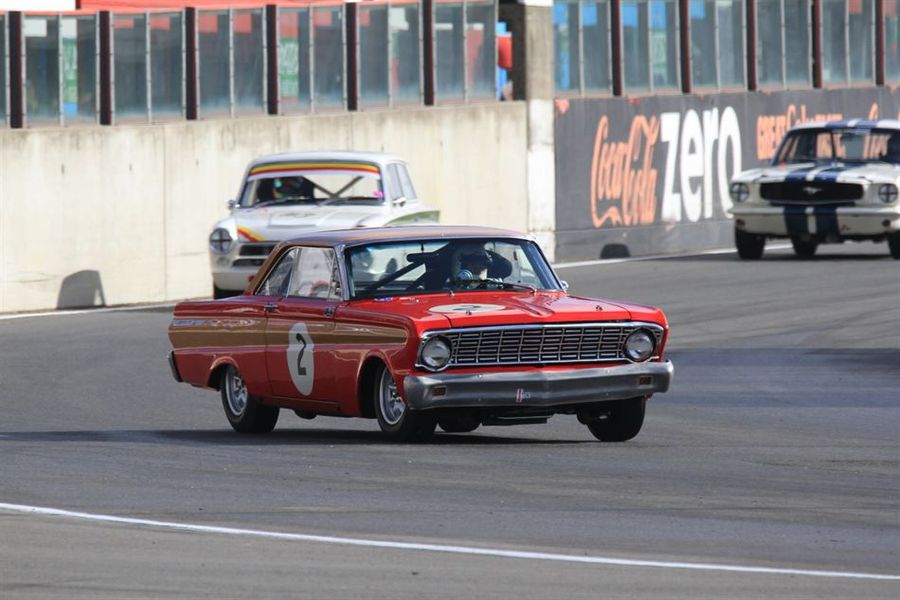 Leo Voyazides/Simon Hadfield took a commanding win in the Masters Pre-66 Touring Car season-opener at Zolder today. Their Ford Falcon crossed the line with a comfortable 32-second lead over Andy Wolfe/Michael Gans (Lotus Cortina), with the Mark Martin/Andrew Haddon Cortina well over a minute adrift in third. Ron Maydon won the Mini class, but only just, as he held off visiting Dutchman René de Vries by a mere two tenths.
While front-row starters Voyazides and Wolfe headed into the first corner with a comfortable cushion, Mark Martin (Lotus Cortina), Greg Thornton (Ford Mustang) and Jonathan Lewis (Austin Cooper S) dived in three-wide, the nippy Mini coming out on top. On the next lap, Hans Hugenholtz (Lotus Cortina) passed Ron Maydon (Austin Cooper S) for sixth, while local hero Thierry de Latre du Bosqueau took eighth from Katsu Kubota’s similar Lotus Cortina.
By lap three, the order had settled, Voyazides leading Wolfe by two seconds, with Thornton a further eight seconds down. Both Thornton and Lewis ran lonely first stints in third and fourth, but behind them a group formed that took an interest in Mark Martin’s fifth place. Hugenholtz leading the chase for Martin’s Cortina, followed by Maydon and De Latre, before the Dutch Cortina lost time on lap eight. Twenty minutes into the race, Katsu Kubota joined the midfield group and, on lap nine, passed Maydon to take seventh. Five laps later, however, the Japanese driver stopped out on the circuit.
Lewis, Martin and Kubota were the first to pit on lap 13, Martin handing over to Andrew Haddon, who immediately began setting sub-2 minute lap times. Voyazides, in the leading Ford Falcon pitted two laps later, while Wolfe hung on for another lap before Michael Gans jumped in.
“I was trying to give Simon a car with some brakes,” explained Voyazides. “The extra weight we run this year, 100 kilos, has a big effect so it was a case of conservation rather than pure racing.”
It was a close call when Gans headed out with a narrow lead, but Simon Hadfield quickly restored the order in the Falcon to establish a lead of 14 seconds halfway into his stint.
Meanwhile, Haddon’s quick times had hauled him into third place, ahead of Thornton and a lively Mini dogfight for fifth. Jonathan Lewis had lost out at the pit stops, and on lap 17, Ron Maydon took the lead of the Mini class. René de Vries in the Dutch Mini would join them by the end of the race, to make it a three-way Mini tussle. Lewis had a tyre delaminate after the pit stops, however, and had no grip and thus no defence when Maydon attacked and then De Vries attacked for sixth on lap 25. Lewis’s tyre went pop two laps from home!
And Lewis’ car wasn’t the only ailing Mini, as Maydon was now starting to slow as well. The Dutchman had a shock class win in his sights but the Masters boss narrowly hung on to beat De Vries by two tenths.
“That was great fun,” said Maydon. “Really close racing. If I roughed anyone up, I’d like to apologise!”
Lewis lost one more place to De Latre but made it to the finish in eighth.
After 29 laps, Hadfield finished in style with a fastest lap of the race (1m56.583s) to beat the Wolfe/Gans Cortina by over half a minute.
The Martin/Haddon Cortina came home third, with Thornton’s Mustang a lonely fourth. Behind the three Minis and the De Latre Cortina in seventh, the Martin Melling/Martin Brewer Falcon, Bert Mets’ Mini Cooper S and Richard Bateman’s Cortina were the remaining finishers. Besides Kubota, the Cortina shared by Hugenholtz and David Hart’s 16-year-old son Olivier – making his historic racing debut, straight from karts – was the only car failing to reach the finish.
Simon Hadfield Masters Pre-66 Touring Car Leo Voyazides Ford Falcon Zolder