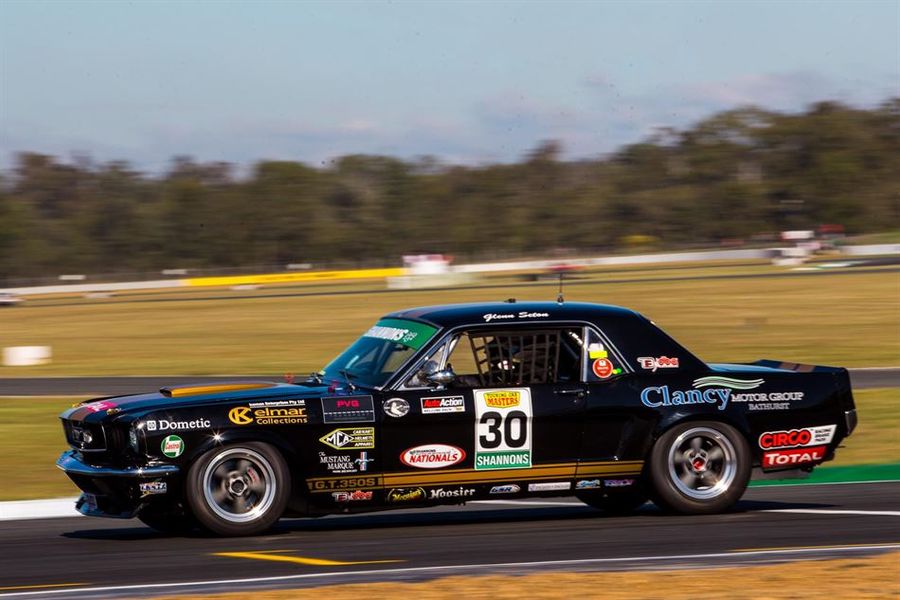 Glenn Seton delivered a consistent weekend as the Touring Car Masters visited Queensland Raceway– he won a race and twice finished second – to give the Thunder Road Racing Team their first round victory and the first win in the category for a generation one Ford Mustang. In an exciting final race John Boew (ProMaster), Jason Gomersall (ProAm) and Adam Garwood (ProSports) were the big winners but it was not enough to deny Seton overall honours. It was also Seton’s first TCM round victory since Bathurst in 2011.
“John and I have been racing each other like that for years and I tried to pull as big a gap as I could but he still got me!” Seton said on the podium. “It’s the first win for Don Dimitriadis and his ’64 Mustang in TCM. He’s a great supporter of the category and we have a great time when we go away racing, so this is great for him and it was a really enjoyable weekend.”
The 16-lap trophy race featured three different leaders, Leo Tobin leading the field away in his repaired Ford Mustang for the first three laps. Seton and Bowe were rapidly on the march, however, with the former climbing to ninth at the end of the first lap and the latter to eleventh. Mark King battled Tobin for the lead on the third lap before both were passed by a flying Seton a lap later – the Mustang driver then putting his head down to build a margin as the other Pro drivers continued their charge through the field.
Bowe climbed to second two laps later and set out in pursuit of Seton, ultimately passing him with three laps remaining to grab his second win of the weekend. Seton finished second while Jason Gomersall stormed to third place in his iSeek Racing Torana, winning the ProAm class for the first time in a TCM Trophy race.
Reverse-grid king Adam Garwood ran as high as second in his Holden Torana, but ultimately ceded positions to Bowe, Seton and Gomersall before finishing a solid fourth and taking the ProSports class win. Keith Kassulke completed his remarkable TCM comeback by finishing a superb fifth outright in his Outbound Racing Holden Monaro GTS, one year on from his most recent round in the category.
Eddie Abelnica finished sixth, Mark King seventh and Adam Bressington eighth in the second Whiteline Racing Camaro. Tony Karanfilovski and Brett Curran completed the top-10 in the trophy race. Rohan Little, Sven Burchartz and Darren Beale failed to finish the race – Little’s Porsche with mechanical issues and the latter two out with damaged vehicles after Beale’s Monaro locked it’s rear brakes at turn four, making contact with Burchartz Porsche as he entered the corner.
Seton’s ProMasters class round victory was the second in his TCM career and saw him head Bowe and Abelnica in the outright category. John Bowe now leads the standings by 59 points with Eddie Abelnica in second and Seton a further five points further back in third. Mark King moves to fourth in the standings with Steven Johnson – who scored no points this weekend – now fifth.
Gomersall won ProAm ahead of Bressington and Karanfilovski, while Adam Garwood’s ProSports victory came in front of Allan Boughen and Blu Cannon. Both Gomersall and Garwood continue to lead their respective classes. Queensland TransAm competitor Brett Curran won the invitational class driving his stunning Angliss Meats Ford Mustang Fastback this weekend – one that included an impressive ninth place finish in the trophy race. Camaro racer Grant Wilson finished second in invited, eight points behind his local rival.
The next round of the Touring Car Masters series will see the category return to the Shannons Nationals program for the second time this year, round six to be held at the classic Phillip Island Grand Prix circuit on September 9th to the 11th.
Thunder Road Racing Team Touring Car Masters Queensland Raceway Glenn Seton Ford Mustang