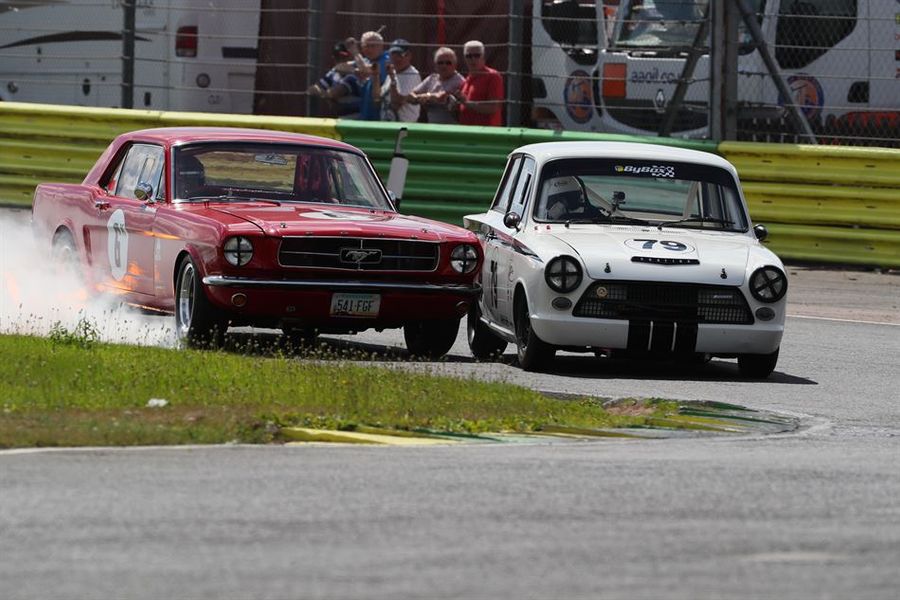 The seventh edition of Croft Nostalgia Festival roared into life at the popular Yorkshire venue yesterday (6th of August), with a blend of retro racing, classic cars, military magic, aerial acrobatics, fabulous fashion and timeless tunes.
Thousands of fans poured through the circuit gates in the morning and spent the day basking in summer sunshine as they soaked up a feast of 1940s-‘70s-themed entertainment.
A massive military display redolent of wartime camaraderie was unsurprisingly a major draw, with living history encampments interspersed by jeeps, planes including a Pitts Special and Bücker Bestmann – think ‘The Great Escape’ – a Sherman tank and a show-stopping Bristol Hercules 14-cylinder aircraft engine, which set the ground shaking as it was fired up every hour.
Classic cars were everywhere you looked, from evocative E-types to marvellous Minis, while stalls sold period clothing and female harmony trio The Daisy Belles provided music to the ears of spectators taking a breather in the giant marquee.
There were single-seater heroics in Historic Formula Ford, Historic Formula Junior and Historic Formula 3, and a tremendous variety of super saloons and sportscars in the Guards Trophy endurance contest, ‘70s Road Sports and Historic Touring Cars, which pitted light and nimble Minis against tail-happy Lotus Cortinas and mighty Mustangs – the original American muscle car.
Indeed, Historic Touring Cars set the scene for one of the most dramatic and eventful races of the day, as the Lotus Cortina of Mark Jones saw off Warren Briggs’ flame-spitting Mustang, which was repeatedly and spectacularly sideways in its pursuit.
What’s more, in evidence of the all-age appeal of Croft Nostalgia Festival, competitors ranged from a brace of 16-year-olds in Historic Touring Cars and Historic Formula Ford at one end of the spectrum to an evergreen Historic Formula 3 racer who will turn 81 next week!
“The first day of this year’s Croft Nostalgia Festival has been an absolute blast!” enthused Croft Circuit Manager Mike Cantelo. “It’s been great to see so many people here taking in the event’s unique atmosphere, and they’ve been able to enjoy some cracking racing and myriad off-track attractions. And the best bit of all? We get to do it all over again tomorrow!”
Guards Trophy endurance contest Historic Formula Junior Historic Formula 3 Historic Formula Ford ‘70s Road Sports and Historic Touring Cars Croft Nostalgia Festival