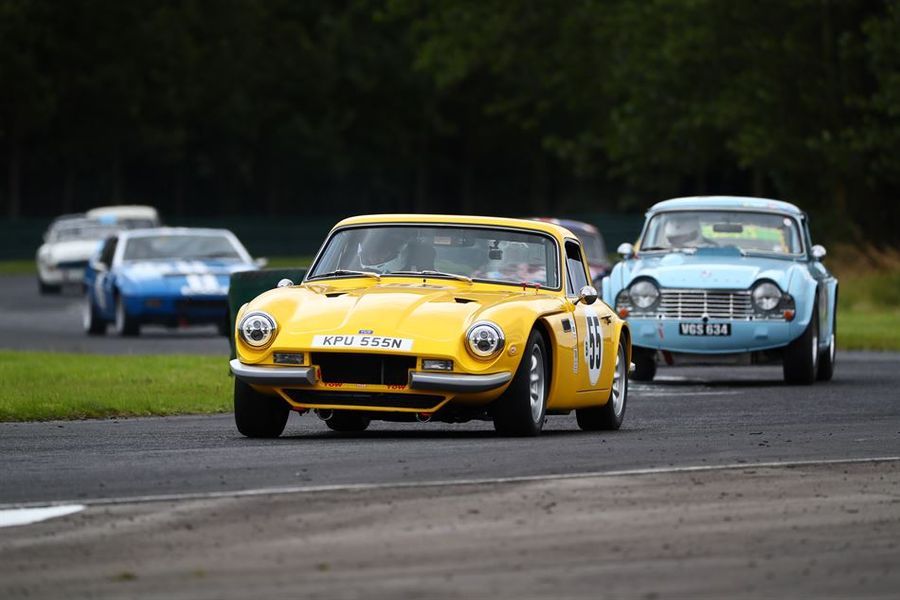 Croft Circuit played host to a first-rate final day of the much-loved Croft Nostalgia Festival yesterday (6th August), welcoming thousands of spectators through the gates to enjoy high quality historic racing, rows upon rows of pristine vintage vehicles and a host of off-track attractions. A visit paid by the RAF’s Avro Lancaster bomber was the icing on the cake.
The Festival, running for an eighth consecutive year, blends top-class retro racing from the Historic Sports Car Club, displays from the foremost classic car collectives, military parades, aerobatics and, underpinning it all, a 1940s-1970s theme with music and fashion from the age taking centre stage.
Saturday set the scene on-track with practice and qualifying preceding an afternoon of racing action, but Sunday provided a packed timetable of 11 races of the highest order – exemplified by the entry of Le Mans winner and Monaco Grand Prix podium finisher Richard Attwood, driving a stunning Porsche 928 in the year of the car’s 40th anniversary.
That pedigree would see Attwood home first in class in what was the biggest field of the weekend, comprising near 40-classics from TVR to Triumph and Austin to Alfa Romeo, for the HSCC’s enthralling Road Sports & Historic Road Sports race – the overall winner of which was John Davidson, sprinting clear in the lightning-quick Lotus Elan.
Another centrepiece was the Historic Touring Cars category – no less competitive in the battle than its modern-day counterpart. It was an all-Ford lockout on the rostrum, with the muscular Falcon of Jack Drury taking the honours ahead of Cortinas, Hillman Imps, Austin A40s and Morris Minis. Peter Hallford in the mighty Mustang had to settle for second.
The single-seaters never fail to provide spectacular racing and plenty of heroics. Rob Smith took the chequered flag in the Historic Formula Fords first bout of the day – the Merlyn Mk20 proving the car-to-beat across the weekend around Croft with Michael O’Brien taking Race 16 later on in the same machinery. In the FF2000s, Andrew Park was king – crossing the line 16 seconds clear of his nearest rival while Julian Stokes was victorious in Historic Formula 3. The Midgets & Sprites and Classic Clubmans rounded off the schedule – Steve Collier’s Midget and Mark Charteris’ Mallock respectively topping the charts.
Around the racing, no fewer than five track parades, showcasing everything from a staggering array of military might across the eras to meticulously maintained classic cars and sweet-sounding vintage motorcycles entertained the thousands watching on from the spectator banks.
The Twister Aerobatics Team dazzled at lunch time and back on the ground, the Bristol Hercules 14-cylinder World War Two aircraft engine continued to draw crowds with its hourly start-up displays creating its unmistakable aural feast.
Not only was that familiar din heard on the ground at Croft, but in the skies. The Battle of Britain Memorial Flight’s centrepiece – the Avro Lancaster – drew all eyes skyward as it banked and rolled over what would have once been home to such aircraft back in the Second World War.
Entertainment continued in the central marquee, The Daisy Belles performed alongside Frank Sinatra (Jack Randle) and George Formby (Colin Bourdiec) in-front of crowds dressed in their Sunday best vintage clothing throughout the day and at the Festival’s tea-dance – with lessons for those less confident of their footwork when it comes to Swing.
“It’s been a super weekend at Croft Nostalgia Festival,” said Circuit Manager Cat Lund. “I’d like to pass my thanks on to all of those involved in making it such a success, and to all of the thousands of spectators we welcomed through the gates here at Croft.
“We’ve had some of the best historic racing around on-track but off-track is where the Festival really shines and once again there was so much to see and do for families and people of all ages.
“The event really has come into its own as the years pass, and it continues to grow. Even with the success of this year’s Festival, we’ve a real desire to push things to a higher level for 2018 and some exciting plans are in the pipeline to make next year’s Croft Nostalgia Festival even bigger and even better.”