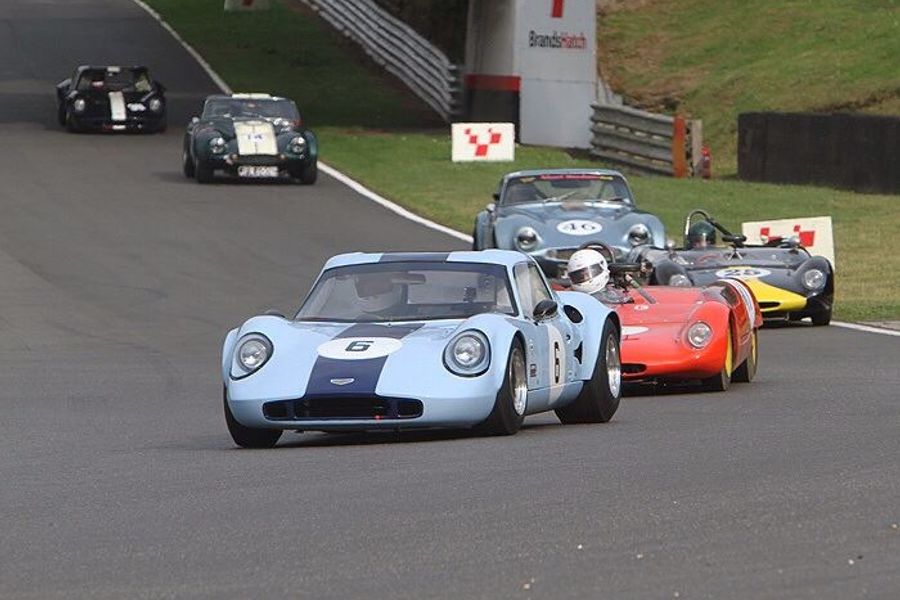 Exactly fifty years after Croft hosted its first race meeting, the Historic Sports Car Club is back at the North Yorkshire track to deliver the race action for the circuit’s annual Nostalgia Weekend (2/3 August). One of the best fields will line up for rounds 10 and 11 of 16 in the Millers Oils Historic Formula Junior Championship. Former champion Jon Milicevic is making a big push for another title despite missing the opening three races of the season. If Milicevic can win twice in his Cooper T59 he could chip away at the points’ advantage currently held by Mark Woodhouse, the leading driver in a front-engined car with his Elva 100. Ranged against Milicevic in the contest for race wins are Peter Morton (Lightning Envoyette) and Jack Woodhouse (Lotus 20/22). Bringing Saturday afternoon’s racing programme to a close will be the 45-minute pit-stop race for the Guards Trophy for GT and sports-racing cars, topped by the Chevron B6s and B8s of Hugh Colman, Nick Thompson/Sean McLurg and Steve Hodges. In the HSCC Historic Formula Ford 2000 Championship contest, Benn Simms is well placed after eight of the 13 rounds, having used a borrowed Reynard SF79 to good effect over the opening races of the season. Simms has now switched to his newly-restored Royale RP30 to continue scoring well against the prime challenge of Ben Tusting (Reynard SF79) and Tom Smith (Royale RP27). However, back on the grid for Croft and sure to be seriously quick is out-going champion Nelson Rowe (Reynard SF79). The HSCC’s Historic Formula 3 Championship has rounds seven and eight of an 11-race schedule. Leading contenders include Swedish commuter Leif Bosson (Brabham BT28), Jim Blockley (Brabham BT21B) and Keith Messer (Vesey) but the real darkhorse could be Benn Simms who plans to give his rare Elfin 600 its eagerly-awaited debut. In what will be a very busy weekend, championship leader Simms also features prominently in a fabulous entry for the HSCC Historic Formula Ford 1600 Championship. Simms will pit his Jomo JMR7 against the Merlyn Mk20s of former champion Callum Grant and rising star Michael O’Brien. O’Brien won last time out at Brands and will surely be quick on his first experience of Croft. Always popular with fans is the ByBox Historic Touring Car Championship with another varied grid of pre ’66 touring cars. Four Ford Mustangs are entered as the model celebrates its 50th birthday and at the head of the race the stage is set for the latest instalment of the epic battle between the Mustang of Neil Brown and the Lotus Cortina of Tim Davies. The HSCC’s 70s Road Sports and Historic Road Sports Championships both have double-header races. Oliver Ford will be eager to retake control of the 70s category after missing the last round at Brands Hatch following an off in qualifying with his Lotus Europa. However, Peter Shaw (TVR Tuscan) and James Dean (Lotus Europa) will have other ideas. Meanwhile, top of the Historic field should be Kevin Kivlochan (Morgan Plus 8), Andrew Shepherd (Lotus 7) and Larry Kennedy (Lotus Elan). The fastest cars of the weekend will line up for two rounds of the HSCC’s Classic Clubmans Championship for the remarkable front-engined sports-racing cars built up to 1981. Mark Charteris and John Harrison are the men to beat in their Mallocks. Finally, the 500cc Formula 3 cars of the late 1940s and early 1950s have a race on Sunday and will re-create the early years of UK post-war motor racing. Saturday starts with qualifying at 9.30am and the first of seven races will be at 13.15. On Sunday, qualifying is from 9.30am, with the first of 11 races at 10.10.