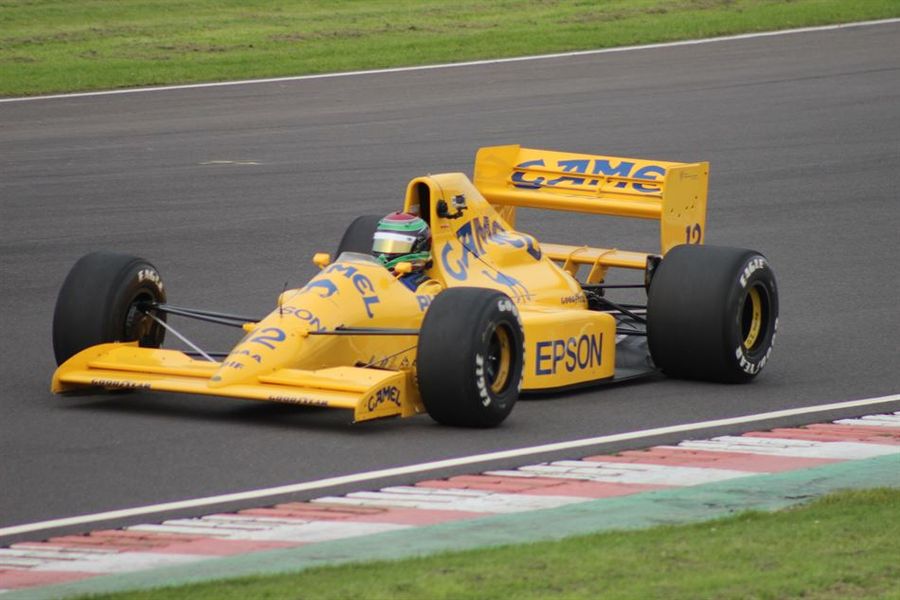 The Castle Combe Circuit’s Bristol Forklifts Autumn Classic has provided some memorable moments in its first five years but on Saturday October 7th, spectators witnessed a sight many thought they might never see.
It has been 20-years since a modern Formula 1 car last raced at the circuit and races with such machinery will never be run at Combe again. But as part of the Autumn Classic’s three demonstration runs for a huge variety of rare and important vehicles, Welshman Steve Griffiths provided fans with a sight and sound which will remain with them for a long time. From the late 1980’s, when most F1 cars were powered by normally aspirated V8 engines, came the Lotus Judd, resplendent in its original yellow Camel colours. Using every inch of the track, Griffiths gave everyone a very small taste of how a modern Grand Prix might look on the 1.85-mile circuit. Those who witnessed the sight and sound will remain in awe.
But almost as intoxicating was a performance from the man who set the all-time outright record at the last F1 race in 1997. Nigel Greensall, as an aside from his later race in the headlining ‘GT & Sports Car Cup’, demonstrated a 1975 Formula 5000 Lola T332, unable to resist a wheel spinning racing start to show the prodigious power of the mighty machine. The car’s owner, Neil Glover, himself a very accomplished driver, also drove his Chevron B37 which American Peter Gethin raced in the US championship in 1976. Greensall and Glover stage managed a mock race with the two cars circulating together at what many might have believed were racing speeds.
Also happy to show the true potential of his car was event sponsor Julian Bronson who demonstrated his Scarab F1 from 1959. One of the last front engined Grand Prix cars, the Scarab is noted for its American Offenhauser engine. Bronson delighted the crowds with a no holds barred unleashing of its V8.
Rain in qualifying created a number of mixed up grids, the slippery conditions favouring those with less powerful cars or more talent. Amongst those was Sir John Chisholm who made the most of the wet conditions in qualifying to take a fine pole position in the Bristol Aeroplane Company Motor Sports Club Challenge Trophy race for 500cc Formula 3 cars. His unusual Arnott was totally outclassed in the dry race, from which he retired, the win going to Darrell Woods ahead of Xavier Kingsland, both driving Starides. Stuart Wright was 3rd in the Cooper Mk XI.
Also showing his immense skill in the wet qualifying conditions of the ‘GT & Sports Car Cup’ race was Greensall. Driving the GT3 class E Type Jaguar in which he had led the prestigious Kinrara Trophy race at Goodwood, the Cheltenham man again humbled the lightweight Jaguars and Cobras from the GT4 class with a time 1.8 seconds faster than his nearest rivals, Philip Walker and Miles Griffiths in Walker’s Lotus 15.
This is the first time the one-hour race has visited Castle Combe, a huge accolade for the event as only four high profile rounds are held each year. Compulsory pit stops are a feature of the races, with the owners having to complete at least 50% of the driving, preventing professionals like Greensall from dominating. Greensall’s team mate, Chris Milner, started the race but it was the impressive opposition rather than any lack of skill from Milner which saw the Jag’ drop to 6th in the dry conditions.
It was Walker in the Lotus who made the early running, but Ben Adams, solo driving a Lola Mk1 took the lead as the race evolved, with Mark Williams moving up quickly from his 8th place in qualifying to hold third.
The pit stops, which saw Walker vacate the Lotus for his young hot-shoe Griffiths, were not kind to Adams who had to remain stationary for a minute. This played into the hands of Walker and Griffiths, the Lola unable to recover and the win going to the Lotus team. Despite an engine problem which reduced the Cobra’s power by 70 bhp, Williams drove valiantly to retain 3rd. Greensall meanwhile used all his skill to recover the E Type to 4th, ahead of a host of faster cars.
Martyn Corfield and Jeremy Welch were the top Healey 3000 pairing in 8th overall, 2nd in the GT3 class. GT2 honours went to Malcolm Paul and Rick Bourne in the TVR Grantura.
The 'Silverline' Historic Formula Junior championship race saw Ben Tilley take a great victory in the Lotus 22 with pole man Peter De La Roche in the drum braked BMC Mk 2 a fine second. Richard Smeeton was 3rd in the unusual Wainer with a great performance against the two young chargers ahead of him.
Patrick Blakeney-Edwards dominated the Vintage Sports Car Club’s Formula Vintage race for Pre-war sports, taking his Frazer Nash Super Sports from pole to a 5” win over his young rival Eddy Williams in a similar car. Mark Gillies was over optimistic at the restart after an initial ‘Safety Car’ period, taking 3rd on the road in his Aston Martin Monoposto, but demoted to 5th with a 30 second penalty, handing his place to Tim Kneller in the Riley TT Sprite.
The Jaguar Enthusiast’s Club’s Norman Dewis Trophy race for pre '66 Jaguars saw E Types dominate the dry 30 minute encounter. Harry Wyndham drove a great race from 9th on the grid to take the win, with the flamboyant Grant Williams sliding his way to 2nd. Chris Milner improved dramatically from his 17th place qualifying slot to take 3rd in the same E Type which later featured in the ‘GT & Sports Car Cup’ race.
The Jon Gross Memorial Trophy race for Historic Aston Martins saw Steve Boultbee Brooks take his wonderful Aston Martin DB3S to its 3rd consecutive win at the Autumn Classic. A further win came in the well supported FiSCaR '50s Inter-marque' race, some 3 seconds ahead of the Lotus Elite of Robin Ellis. Nick Matthews added variety to the podium with his Austin Healey 100/4.