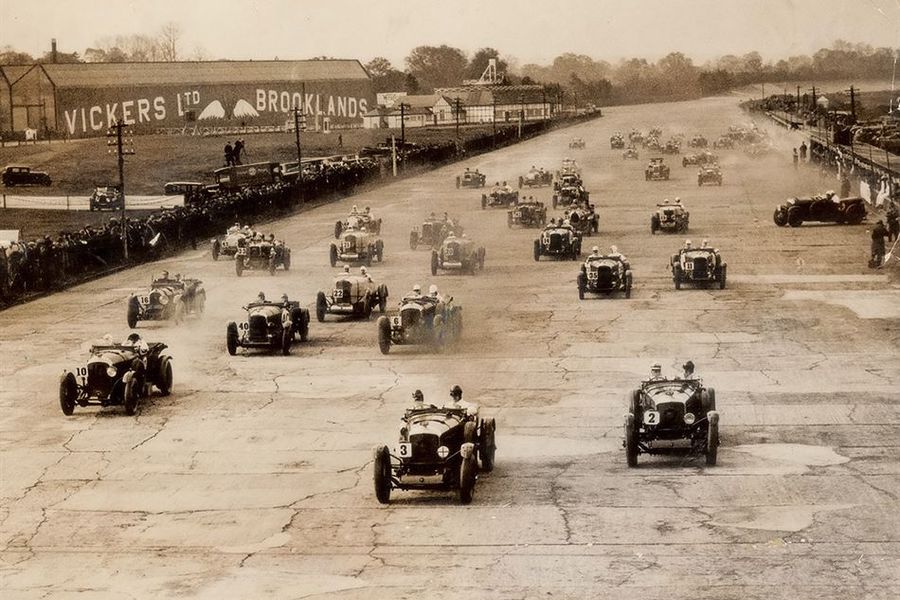 The grand re-opening of the restored finishing ftraight of the world’s first purpose-built motor racing circuit following restoration will take place at Brooklands on Saturday 17th of June 2017, 110-years to the day since the Track was originally opened – and the first day of the 2017 Double Twelve Motorsport Festival, co-promoted by Brooklands Museum and the Vintage Sports-Car Club.
This section of track has been hidden from view since 1940, under a World War II Bellman Hangar which is being restored and relocated as part of the Heritage Lottery-funded Brooklands Aircraft Factory and Race Track Revival Project.
Highlights of the re-opening will include a re-enactment of the original opening parade of 17th of June 1907 with veteran cars, displays and demonstrations of surviving Brooklands racing cars and motorcycles, and taxying runs by some of the museum’s historic aircraft.
One of the main elements of the Aircraft Factory Project has been the dismantling of the WWII aircraft hangar which was built on the finishing ftraight in 1940.  This is currently being restored in South Wales and will return early in 2017 to be re-assembled in a new location in front of the recently completed Flight Shed, alongside the finishing straight and next to the London Bus Museum.
The hangar slab has been removed to reveal the original Finishing Straight which will be reunited with the other surviving sections to restore the pre-war view from the banking and the blubhouse, something that has not been seen since the track closed to the public in 1939.
Once again, the Vintage Sports-Car Club will oversee the well-established format of three separate competitive events of the Double Twelve, with a Sprint, Driving Tests and Concours d’Élégance held over two days, with aggregate scores from any two going towards overall Double Twelve awards. With the special interest in this extraordinary milestone in Brooklands’ already incredible history, the quality of entries is expected to be high.
The three stand-alone competitive events will include:
•           The Double Twelve Speed Trials (Sprint) on the Mercedes-Benz World Circuit on Saturday
•           The Double Twelve Concours held at the Museum across both days
•           The Double Twelve Driving Tests on both sites on Sunday
As well as a main feature of the Double Twelve Festival weekend, Saturday’s Speed Trials will also form a round of the VSCC’s celebrated Speed Championship in 2017, incorporating ten of the Club’s Sprint and Hill Climb events throughout the season.
Added to this line-up will be the very popular Test Hill Challenge as well as the chance to see the museum’s collections of Vintage cars, aircraft and vehicles. The site will be filled with car club displays, demonstrations and trade stands alongside additional catering, live music and plenty to keep families entertained.
Brooklands Finishing Straight