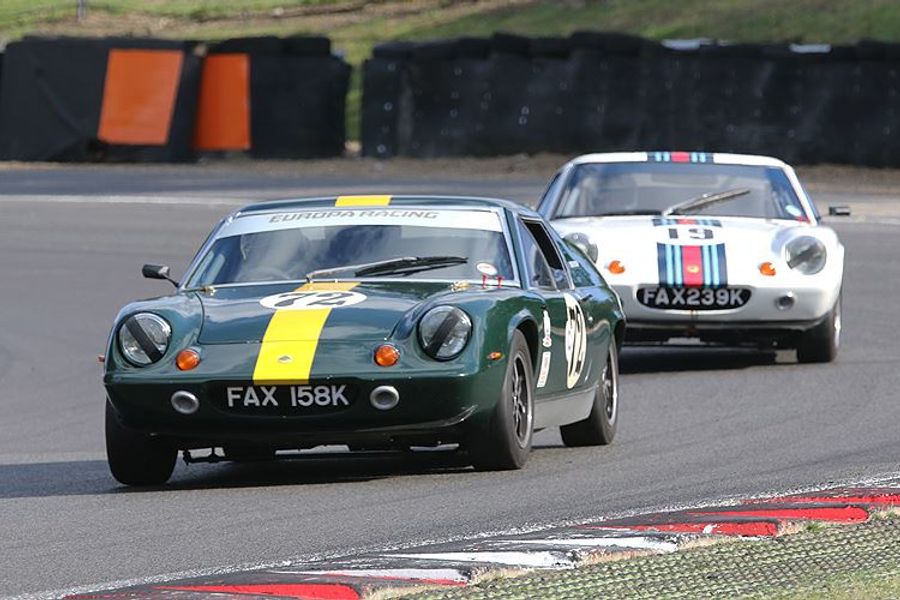 The Historic Sports Car Club will provide the race action at this weekend’s Croft Nostalgia Festival (Saturday/Sunday 5th/6th August) as the North Yorkshire track hosts one of the most popular events of its type. Two full days of racing for HSCC categories will be supplemented by a host of off-track activities and displays, both on the ground and in the air, to deliver a memorable weekend for the region.
Among the HSCC race championships on the timetable is the 70s Road Sports Championship where the Lotus Europa has become something of a weapon of choice in over recent seasons. As many as five Europas will be on the grid at Croft, headed by former champion Jim Dean, Howard Payne and young Will Leverett. Another previous champion in the form of Charles Barter (Datsun 240Z) will take on the Lotuses. Making his Croft debut is none other than 1970 Le Mans winner Richard Attwood in the Porsche 928 entered by Porsche to mark the model’s 40th anniversary.
David Wale, Alun Cook and Mike Lane are among the front-runners in the HSCC’s Classic Clubmans Championship, while Burnley’s John Lambert is one of those in Class B for cars using 1600cc Ford Kent engines. An invitation class for period Sports 2000s is headed by the Royale S2000M of Roger Waite.
One of the weekend’s double-headers is for a grid that brings together the Historic Formula 3 Championship and the Classic Racing Cars series. In Classic Racing Cars the March 712s of Nick Pancisi and Lorraine Gathercole, the Lotus 59 of Mark Goodyear and the Formula 2 Tecno of Julian Stokes are all likely front-runners.
In Historic Formula 3, Jon Milicevic (Brabham BT21B) and Jim Blockley (Chevron B17) will be at the head of the action. However, local racer Jonathan Hughes (Merlyn Mk14A) is a very strong contender.
The two categories for period Formula Ford 2000 single-seaters will share a grid as the HSCC Historic Formula Ford 2000 Championship and URS Classic Formula Ford 2000 Series run in tandem.
Reigning Historic champion is Andrew Park from Millom in Cumbria and he has already staked a major claim for a second title with a mighty opening part of his 2017 season. Taking the fight to Park will be Benn Simms and local hero Davy Walton (Ponteland). Drew Cameron and Doncaster’s Glyn Davies head the Classic FF2000 pack in their Van Diemens.
The weekend’s longest race will run on Saturday afternoon with the 40-minute pit-stop round of the Guards Trophy for sports-racing and GT cars. Philip Nelson, Charles Allison and Nick Thompson/Sean McLurg are the leading Chevron runners and they face a tough challenge from the leading open-top sports-racers including the Elva Mk7S of Max Bartell/Ben Mitchell.
The GT pack is topped by the mighty TVR Griffiths of Mike Gardiner/Dan Cox and Peter Thompson, while a clutch of rapid Lotus Elans will have their own contest with defending champion John Davison sure to be prominent.
The HSCC’s Historic Formula Ford 1600 Championship is having a stellar season with packed grids and fantastic racing as the Club celebrates 50 years of the world’s most popular racing category.
Top of the points, following the most recent championship rounds at Brands Hatch, is defending champion Callum Grant in his Merlyn Mk20s. The Lancashire racer is always quick and has won several races this season as he bids to win the title for the third time. However, Grant has an array of rivals, including more Merlyns for Max Bartell, Sam Mitchell, teenager Benn Tilley and, perhaps strongest of all, last weekend’s Silverstone winner Michael O’Brien.
Two drivers stand out as the likely pacesetters in Historic Formula Junior and both face busy weekends as they race other cars. Young Benn Tilley, also a Formula Ford front-runner, will be strong in his Lotus 22 while sometime Historic F3 racer Jonathan Hughes in back in his more familiar Brabham BT6.
Top of the Historic Road Sports pack will be the mighty Morgan Plus 8 of young Will Plant. While some of the Croft lap will suit the powerful V8, the tighter infield sections will play to the strengths of the nimble Lotus Elans and it is former champion Peter Shaw who heads the challenge to the Morgan. Shaw will be backed up by more Elans for Paul Tooms, John Davison and Jim Grant.
Always a crowd favourite at Croft is the Historic Touring Car Championship and the pair of races should deliver more David v Goliath action. Leading the American muscle is the mighty Ford Mustang of Peter Hallford and top of the Cortina pack is teenager James Clarke.
Finally, the Lackford Engineering-supported Sprite and Midget Challenge is a very welcome guest and features a strong grid for a pair of races. Series supporter Robin Lackford makes the trip north from Sussex to race his Frogeye, while drivers like Richard Perry and Paul Campfield are among the major contenders.
On Saturday, the first of seven races will be at 12.20 after qualifying from 09.10
On Sunday, the first of 11 races will be at 09.10