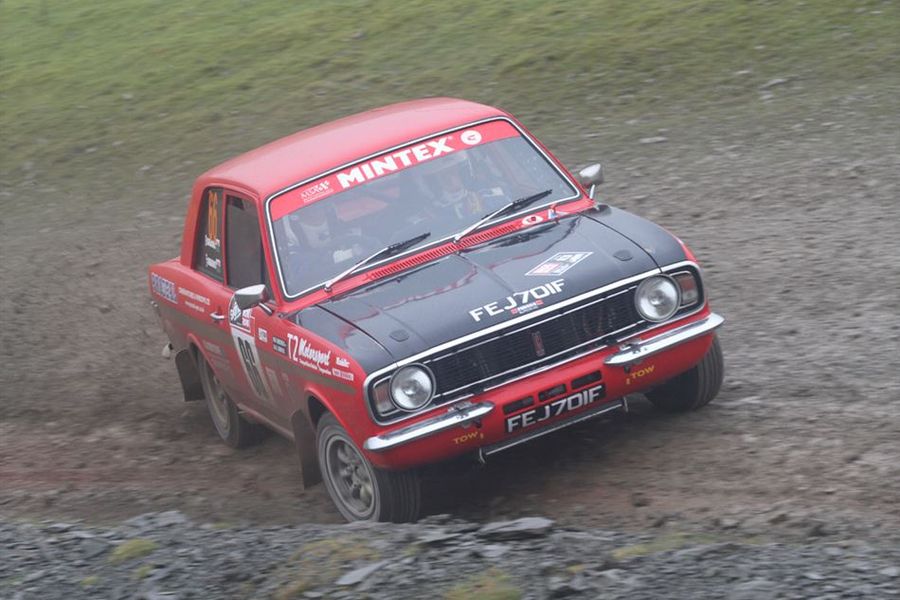 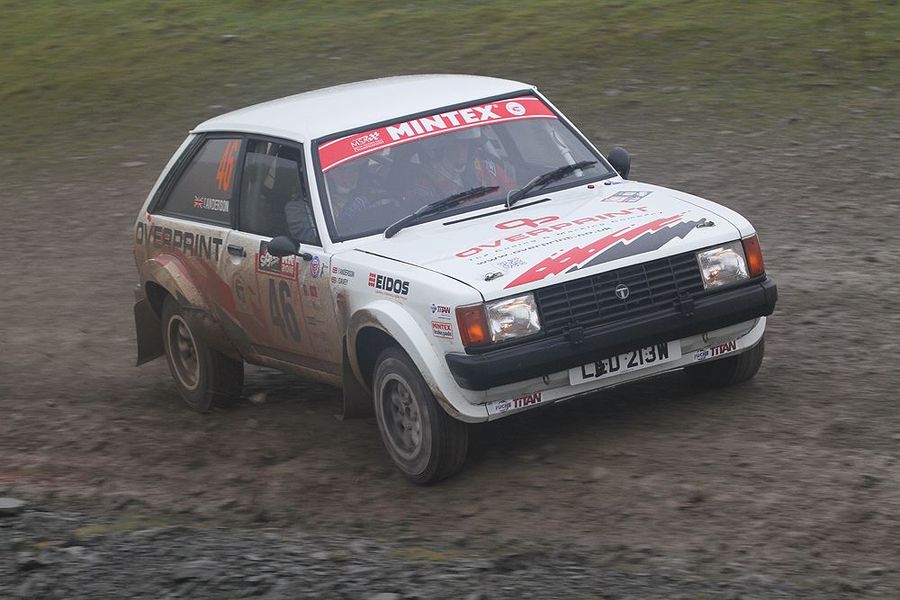 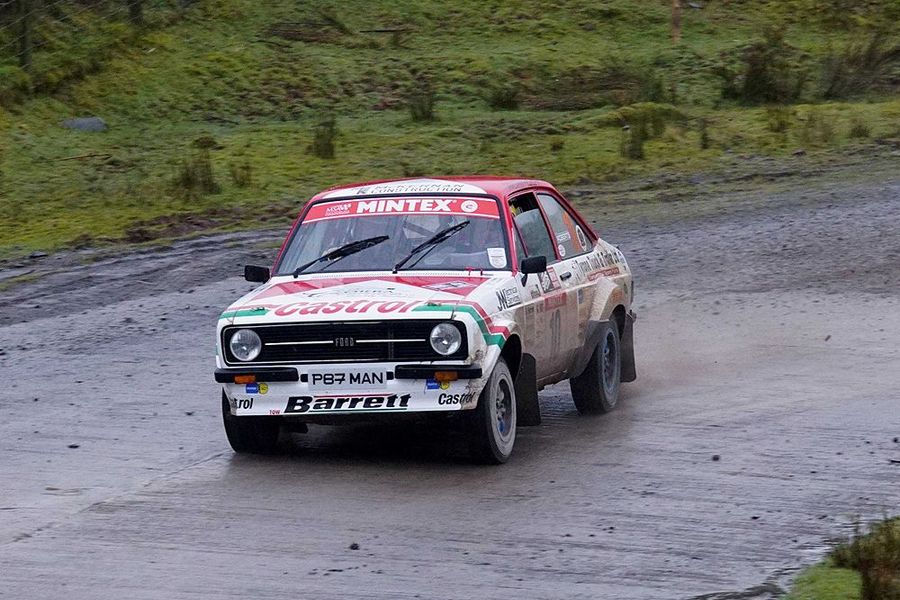 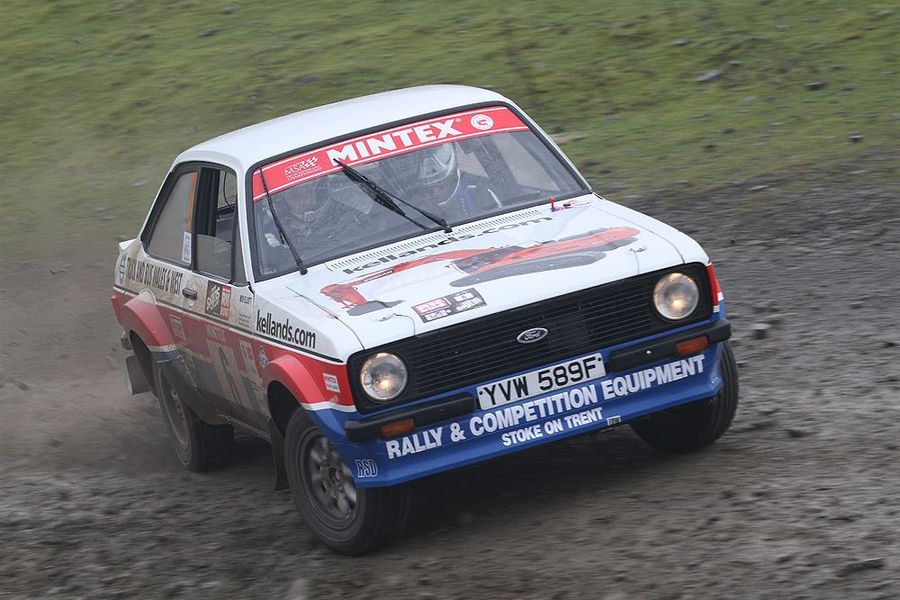 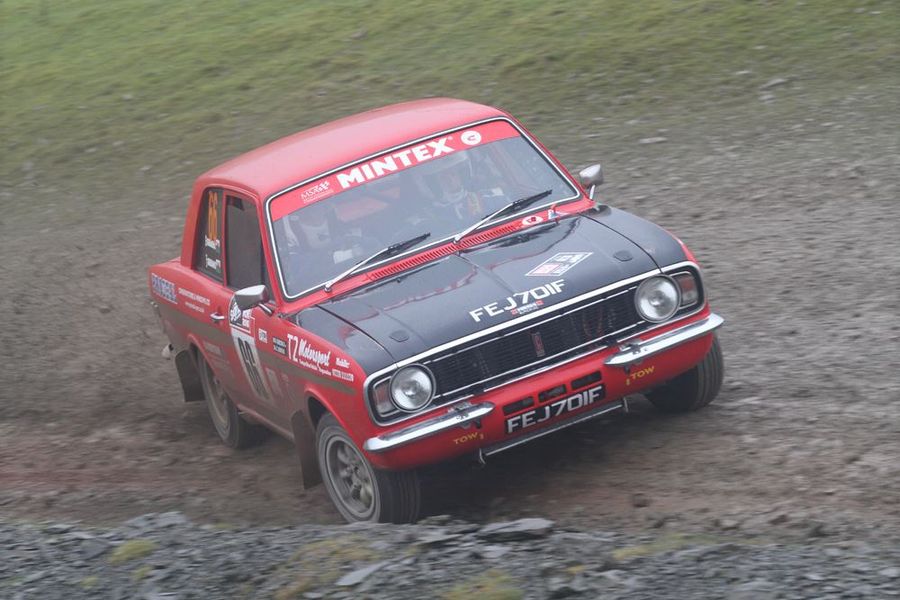 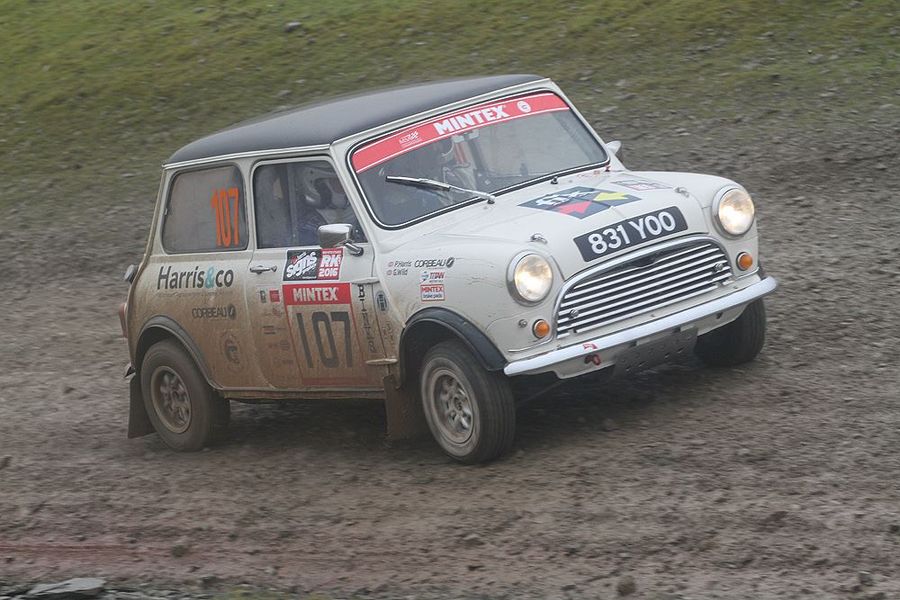 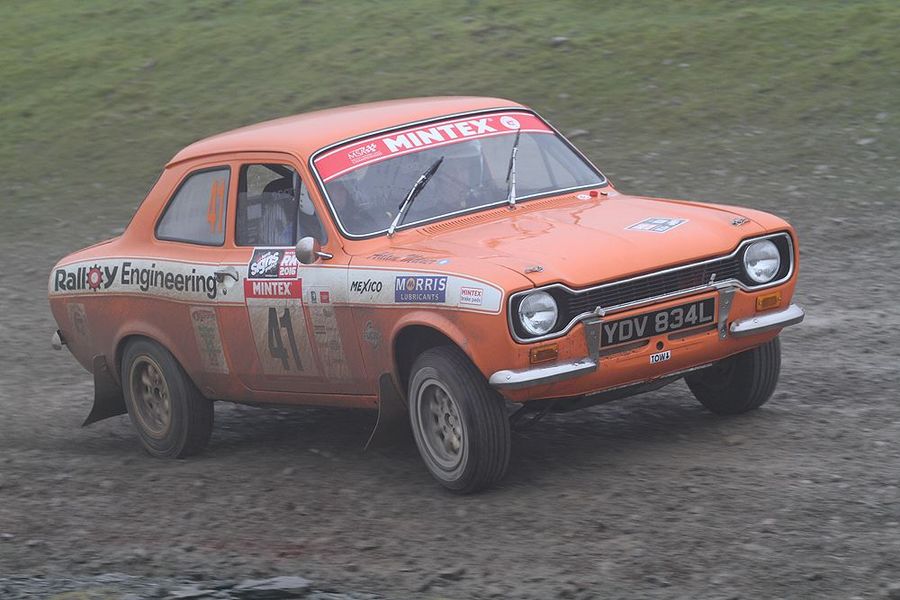 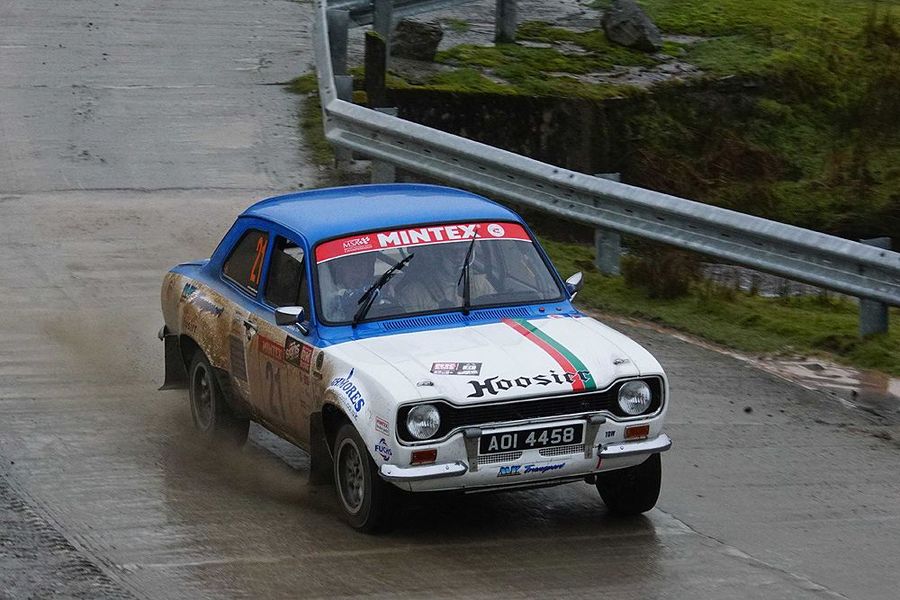 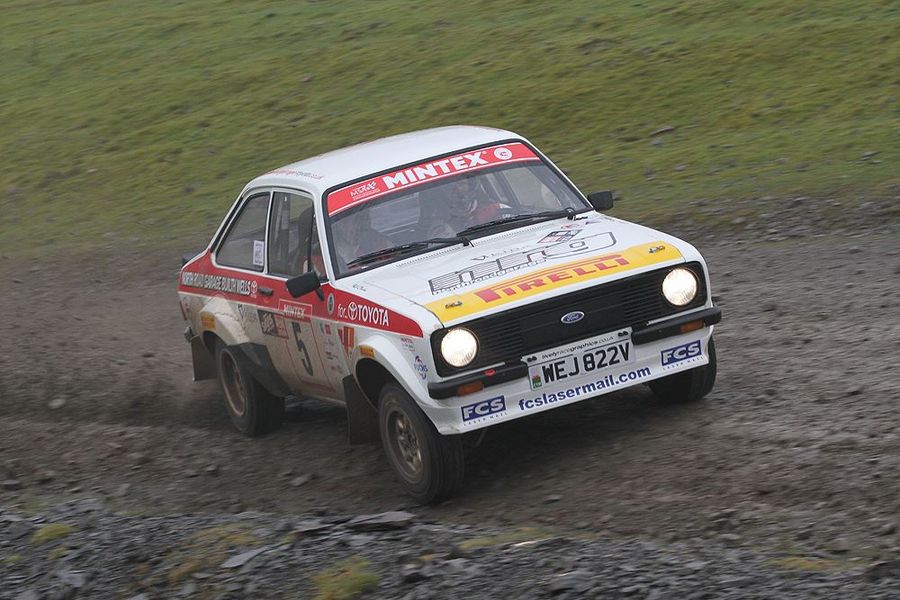 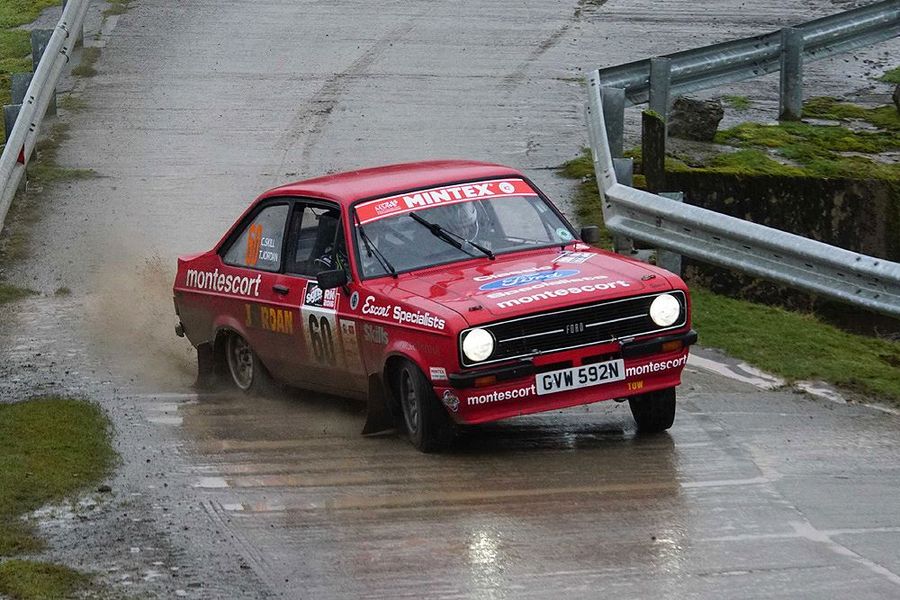 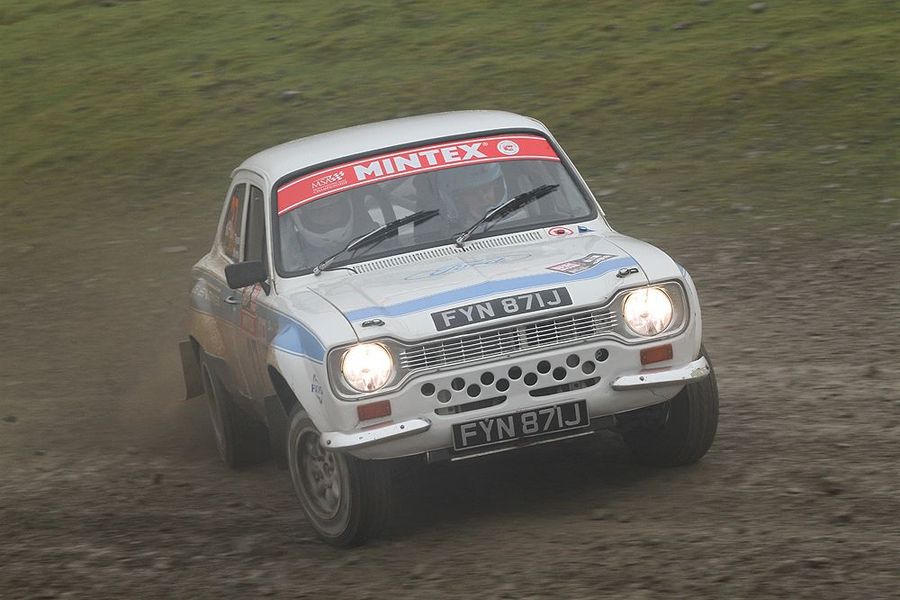 Click on the Gallery tab for pictures from the rally (images courtesy of Paul Lawrence).
Jason Pritchard and Phil Clarke got their season off to a perfect start with victory on the Red Kite Historic Stages (Sunday 21st of February), the opening round of the 2016 Mintex MSA British Historic Rally Championship. The ice and snow of the 2015 Red Kite was replaced by strong winds, persistent rain and, at times, thick fog to deliver another tough start to the season but Pritchard and Clarke (Ford Escort Mk2) never put a wheel wrong and took maximum points to open their title defence in style.
However, this was no easy win as Nick Elliott and Dave Price ran neck-and-neck for the lead despite their Escort Mk2 stalling on the opening stage. It was still very close for the lead until it happened again on the second run through Crychan and the engine refused to restart for around 15 seconds. While Pritchard could afford a measured approach in the final Caio stage, Elliott attacked to grab second place back from the impressive Joe Price and Chris Brooks (Escort Mk2).
A final stage gearbox drama that cost two minutes for John Perrott and Keaton Williams (Ford Escort Mk1) left the way open for Stanley Orr and Guy Weaver to win a Category 2 battle that had raged all day. Category 1 was also settled on the final stage as Bob and Dale Gibbons (Ford Cortina Mk2) emerged for victory when the chasing Bob Bean and Malcolm Smithson had an electrical failure stop their Lotus Cortina.
“No dramas at all; we tried to avoid punctures and kept it nice and tidy,” said Pritchard after spraying the champagne in Llandovery. Meanwhile, Elliott was frustrated to drop a total of more than half a minute when the engine would not restart, but was relieved to score a good result on the Red Kite after two troubled runs in previous years. He was also feeling decidedly groggy, so second overall was a good start to his season. The on-board footage shows them drop around 20 seconds on the opening stage.
While Pritchard/Clarke won the Holton Homes Category K, Elliott/Price won the RSR Historic Engineering Category 3 and immediately marked themselves as the two crews to beat for this year’s BHRC crown.
Joe Price suspected that Elliott would push him back to third on the final stage but nevertheless turned in a cracking performance to show this he is now one of the BHRC pacesetters. Equally impressive was Irish ace Paul Barrett with Welsh co-driver Dai Roberts who drove their Pinto-powered Escort with big commitment to finish a tremendous fourth overall, well in touch with the top three.
Steve Bennett is getting ever closer to the head of the pack and, with M-Sport’s Ian Tullie on the notes, he took fifth overall on the final stage when a steering problem cost the Fiat 131 of Matthew Robinson and Sam Collis half a minute. Despite the late issue, the pace of the Fiat on its first BHRC event was impressive. “That’s a good start,” said Robinson at the finish. “Even in the Escort I’d probably not have matched Jason and Nick down here,” he added.
Only 20 seconds split the next four crews on a day when poor visibility was a major challenge for the second run over the fast sweeps on the top of Epynt on the Route 60 stage. Simon Webster and Jez Rogers just beat Rudi Lancaster and George Gwynn, while Orr/Weaver took the Capital Construction Category 2 with ninth overall. “We had a bit of a steady start but were going better in the afternoon,” said Orr. Neil Williams and Peter James wrapped up the top 10 overall in their Escort Mk2.
The Gibbons father and son took the Vintage Car Radiator Company Category 1 but it was set for a tight finish as heading for the second run through Caio, the gap to Bean/Smithson was only 11s. Gibbons senior arrived at the finish concerned that he might have eased back too much.
However, Bean never made it to the finish after a complete electrical failure stopped the car mid-stage. “I was giving it a good go,” said Bean who was later able to short circuit the system and drive the car back to Llandovery.
In class C2, a stand-out performance came from Adam Milner and Roy Jarvis who put their 1600cc Escort Mk1 into 13th overall on the driver’s first rally in Wales. Incredibly, they only had one stage free of a persistent misfire and duly set seventh fastest overall on the second run through Caio. Milner finished one place down on class C5 winners Simon Tysoe and Paul Morris who had a good day in their Escort Mk1.
In Category 3, Chris Skill and Tom Jordan (Ford Escort Mk2) topped the 1600cc division despite suffering punctures on each visit to Crychan. “I’ve never had two punctures in one day before,” said Skill after one front and one rear puncture. Class D4 fell to Guy Anderson and new co-driver Steven Davey (Talbot Sunbeam Lotus) who had a good day as they got used to the new partnership.
The new pairing of Phil Harris and Graham Wild (Mini Cooper) added to Harris’ remarkable run of class B2 wins with another victory despite some incredibly tough conditions for the Mini.
Category winners were:
Category 1: Bob Gibbons/Dale Gibbons (Ford Cortina Mk2)
Category 2: Stanley Orr/Guy Weaver (Ford Escort Mk1)
Category 3: Nick Elliott/Dave Price (Ford Escort Mk2)
Category K: Jason Pritchard/Phil Clarke (Ford Escort Mk2)
Red Kite Historic Stages Mintex MSA British Historic Rally Championship Phil Clarke Ford Escort Mk2 Jason Pritchard Gallery