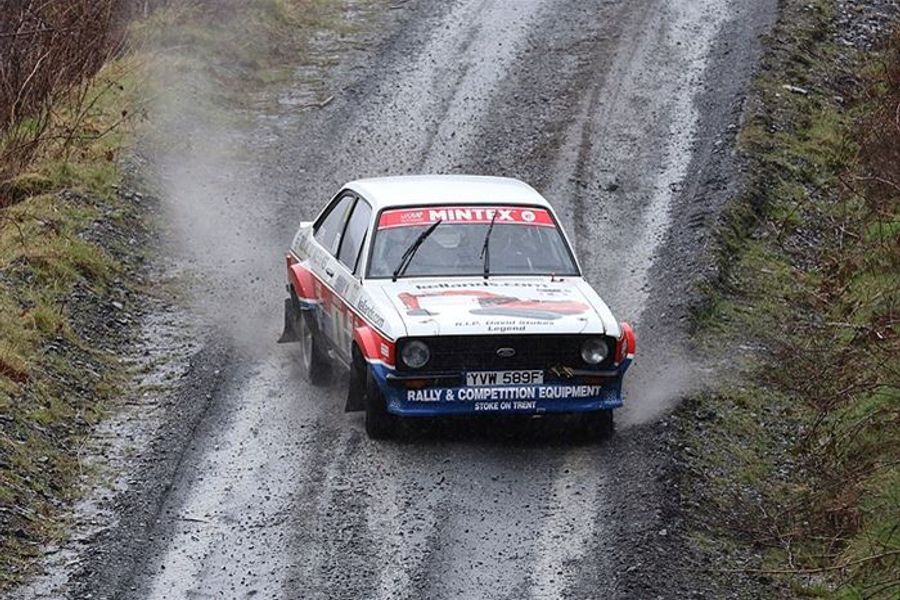 Jason Pritchard and Phil Clarke took their second win of the season on Rally North Wales (Saturday 2nd of April), the second round of the 2016 Mintex MSA British Historic Rally Championship. Once again, Pritchard and Clarke traded times with Nick Elliott and Dave Price and it was a chicane in the opening stage that proved central to the final result. Elliott hit the bales and his engine stalled, taking around 20 seconds to restart, while Pritchard was also delayed. After that, the two leading crews traded times and Pritchard went into the final Gartheiniog stage just eight seconds ahead but extended his margin to 21 seconds for a hard-won victory. Joe Price and Chris Brooks were only half a minute down on the lead with one stage to go, but ran wide on a hairpin near the finish of the final stage and got beached, dropping two minutes in the process. Instead, Matt Edwards and Will Rogers took third in the Opel Kadett of Peter Smith. “That’s another big result on gravel,” said Pritchard after arriving back in Dolgellau with a 21s winning margin. He also won the Holton Homes Category K. However, Elliott’s spectacular fight back from his stage one delay had closed the gap to just eight seconds heading into the second Gartheiniog stage. But worries over a starter motor that was trying to catch fire on that final nine-mile stage cost Elliott his chance of pulling back any more time on Pritchard. “I pulled back what I could and didn’t do too bad to claw some of it back,” said Elliott after a tangle with the bales at the second chicane in Dyfi Main stalled the engine. Pritchard, running next on the road, also had to stop at the chicane and pick his way through the damaged bales. Elliott won the RSR Historic Engineering Category 3. Pritchard ended the stage 16s up and over the next four stages Elliott managed to pull back half of the deficit as the two Escort Mk2 crews set a fantastic pace. From the modern entries, only Luke Francis could better the historic times in his Mitsubishi Evo 9 and the Escorts eclipsed an R5 Fiesta and several WRC cars in the process. Joe Price and Chris Brooks should have taken third and were within half a minute of Pritchard going into the last stage. “We ran wide on a hairpin a mile from the finish and lost two minutes,” said Price after dropping to tenth. Instead, third went to Matt Edwards and Will Rogers in a guest outing in Peter Smith’s Opel Kadett, which ran strongly despite a water-induced misfire.  Paul Barrett and Dai Roberts (Escort Mk2) dropped a minute and a half driving out of the first stage with a puncture, but then set a fabulous pace in their Pinto-powered Escort to fight back from 38th to fourth and first in class D3. “Big attack on absolutely brilliant stages,” said Barrett after turning in one of the drives of the rally. Barrett’s fourth place was at the expense of Matthew Robinson and Sam Collis who spent the day chasing the right tyres for the front of the Fiat 131. “We’ve got to get our heads around it a bit more,” said Robinson. A drive that should have been the sensation of the rally came to an end on stage three when Adam Milner and Roy Jarvis had a gentle roll in their 1600cc cross-flow Escort Mk1. Milner set joint second fastest time in Dyfi Main, his first visit to that particular forest, but ran wide on a 90-right in Gartheiniog and ended up down a bank with little damage. They were out of the rally but their pace was hugely impressive. Rounding out the top six were Rudi Lancaster and George Gwynn. “No dramas, it went really well,” said Lancaster after a return to Dyfi following an absence of more than 20 years. A mighty battle raged over seventh place and Capital Construction Category 2 victory. Stanley Orr/Guy Weaver (Escort Mk1) hit a rock in the first Gartheiniog and struggled with a bent damper, while the charging Simon Tysoe/Paul Morris pulled back 11s on the final stage to leave the gap at just six seconds. “That last stage was awesome,” said Tysoe of the deciding nine-miler in Gartheiniog. Ben Friend and Cliffy Simmons chased Orr and Tysoe to make it a thoroughly enjoyable three-way contest. “It was just a great battle all day,” said Simmons. Bob and Dale Gibbons went clear in the Vintage Car Radiator Company Category 1 in their Ford Cortina Mk2 GT. “Dale was at his best on the notes,” said the proud dad, while Bob Bean/Malcolm Smithson (Ford Lotus Cortina) took their class. Phil Harris/Graham Wild (Mini Cooper) got helped out of a final stage ditch to maintain their class B2-winning record. In class C3, Elliot Retalick/Tim Tugwell (Hillman Avenger) took over once Milner’s Escort went out and David Hopkins/Tony Vart (Talbot Sunbeam) won class D2 after Chris Skill/Tom Jordan (Escort Mk2) went out on the opening stage with a blown engine. Notable retirements included Steve Bennett/Iain Tullie with a failed coil, Tim Freeman/Paul Williams who upended their Escort and Neil Williams/Peter James with a broken halfshaft on the opening stage.