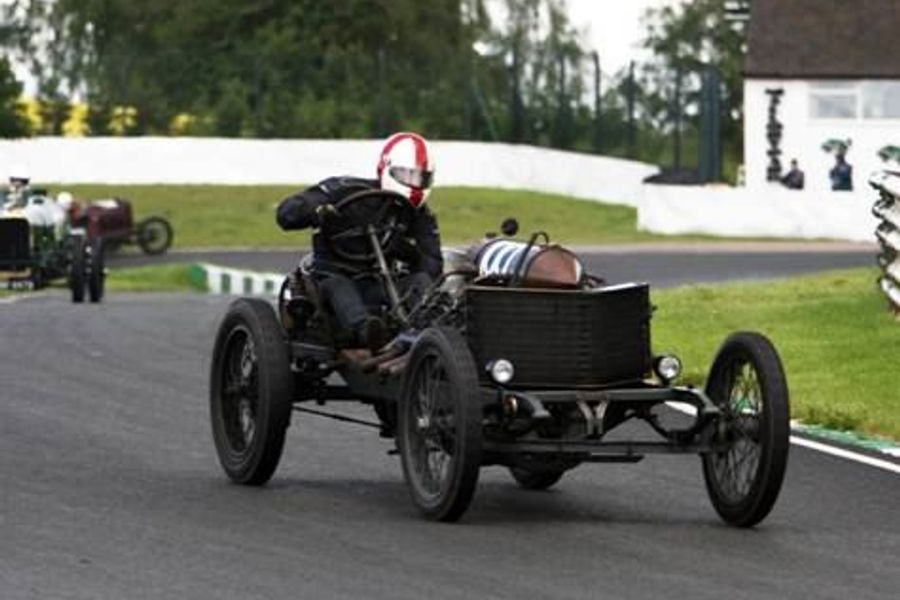 The Vintage Sports Car Club's annual Dick Baddiley & Edwardian Racing Trophies Handicap Race for Edwardian Cars is set to be the highlight of a stellar day of historic motorsport at Mallory Park in Leicestershire this Saturday,  22nd of  August.
The unique event – the only one of its kind in the world – has attracted a capacity grid of Pre-1918 international machinery, with almost all taking part over 100-years-old. Although the day’s oldest competing car, Mark Walker’s 1905 Land Speed Record holder Darracq 200HP will be the undoubted pace-setter, he is joined by a host of other historic machines, such as David Ozanne’s 1911 ‘Coupe de l’Auto’ winning Delage.Elsewhereinthe 12-race programme, two ex-Bob Gerard cars will compete in honour of the local racing hero at his spiritual home of Mallory Park, a circuit he opened in April 1956; the ERA R4A of Nick Topliss and Steve Russell’s Cooper Bristol which will headline the day’s title feature for Pre-1961 Racing Cars.
Often the highlight at VSCC Race Meetings, there is another eclectic line-up of Morgan Three Wheelers, ‘Chain-Gangers’, Grand Prix Bugattis, Brooklands racers and aero-engined specials to contest the Pre-1931 Vintage race whilst the Standard and Modified Pre-war Sports-Cars yet again confirm their enviable reputation with another capacity grid.  In addition to the Club’s traditional ‘Sets’, the Burghley Trophy for Austin 7s will also form part of one of the day’s short handicap features, whilst to complement the array of VSCC events, the day also hosts the prestigious John Taylor Memorial Trophy for Front Engined Formula Junior Cars, and also races for 500cc Formula Three F3 cars and the Triple-M Register and their Pre-war MG machinery.
As well as the track action, VSCC associates Bonhams will host an impressive period display in the Paddock, with all the competing cars on show alongside other fine examples from this pioneering era of motor racing.
With its amphitheatre-esque setting, Mallory Park offers some of the best Spectator viewing in the UK, with many elevated areas from which you can enjoy the action outdoors or from the comfort of your own vehicle.  Once again, those arriving in pre-war cars are encouraged to gather in the dedicated parking area above the ‘Devil’s Elbow’ parallel to the start/finish straight whilst you can also follow the access roads around the edge of the circuit and park up right down to the famous ‘Gerard’s Bend’.
As at all VSCC events, entry to the Competitor Paddock is free but it can only be accessed on foot via the bridge over the start/finish straight; here you can get up close to the competing machinery and speak to the drivers, and also explore the trade stands and autojumble.
Track action gets underway with practice sessions from 9.30am with the first race scheduled to start at 11.45am. This will be followed by lunch break, with racing continuing from 1.00pm (all timings approx and subject to change).