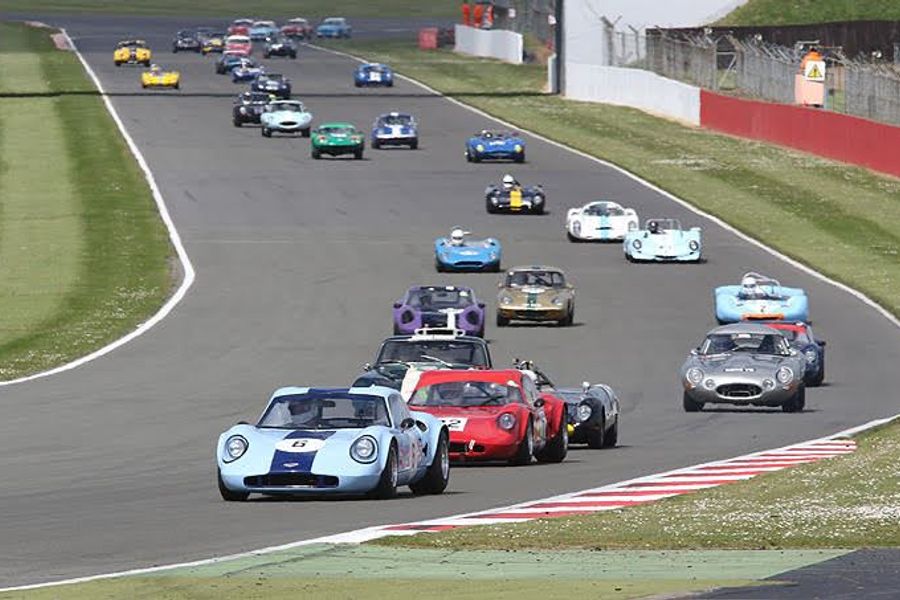 The Guards Trophy GT and Sports Racing Championship will feature a capacity 58-car grid at next weekend's Silverstone Classic (24th to the 26th of July). The Historic Sports Car Club’s race series will make its debut at the world’s biggest historic motor racing festival with a 40-minute race starting at 1.50pm on Sunday afternoon. The cars will be located in the International Paddock.

The Guards Trophy is open to pre-1966 GT cars and pre-1969 sports-racing cars and is the best-supported championship in historic racing. In 2014, 167 drivers took part in the seven-round championship. In four rounds to date this season, over 110 drivers have taken part and the response to the race at the Silverstone Classic was overwhelming, with 90 entries for 58 places on the grid.

The Guards Trophy has traditionally been a happy hunting ground for the timeless Chevron B6s and B8s from the late 1960s and no less than 10 of them will be on the grid to make this one of the biggest gatherings for some time. The car that is likely to set the ultimate pace is the B8 shared by Martin O’Connell and Andrew Kirkaldy as they won at Silverstone in May after a mighty battle with the B6 of Michael Schryver and Simon Hadfield. This time, Will Schryver joins his father Michael in their B6 as they take the fight to O’Connell and Kirkaldy.

However, this is certainly not just about two Chevrons. More quick examples are entered for Charles Allison, James (cousin of Will) Schryver, Philip Nelson and another father and son duo, Hugh and Mark Colman. In fact, there are at least 10 family pairings in the entry.

Two cars stand out as being capable of unsettling the Chevrons and both are father and son combinations. Graeme and James Dodd have previous Chevron-beating form in their Ginetta G16, while Stuart and George Tizzard were winners at Thruxton at Easter in their Lenham. Meanwhile, Max Bartell and Callum Grant won recently at Snetterton after a great performance in the Bartell’s Elva Mk7S and Michael and Andrew Hibberd, another father and son squad, are serious title contenders in their Lotus 23B.

Away from the sports-racing cars, a tremendous field of pre ’66 GT cars will provide a race within a race. The TVR squad seems to grow with every round and the mighty 4.7-litre Griffiths is regularly the Guards GT pacesetter in the hands of Mike Gardiner and Dan Cox. However, back to shake things up is Mike Whitaker who has really pioneered the success of this model over the last two or three seasons. There are four more Griffiths in the pack, including those of John Spiers, Kevin Kivlochan and Jamie Boot. Ranged against the TVR might is the very rapid AC Cobra of Robert Bremner and the leading Jaguar E-types of Sam Hancock/Sam Thomas and Julian Thomas/Nigel Greensall.

Among the less powerful GT cars, notable contenders include the Lotus Elan of Paul Tooms, who is paired with former British GT champion Michael Caine, and a gaggle of Marcoses, MGBs and TVR Granturas.

So, with effectively two races in one from a capacity 58-car grid, the HSCC’s Guards Trophy is set to be a very welcome addition to the 2015 Silverstone Classic.