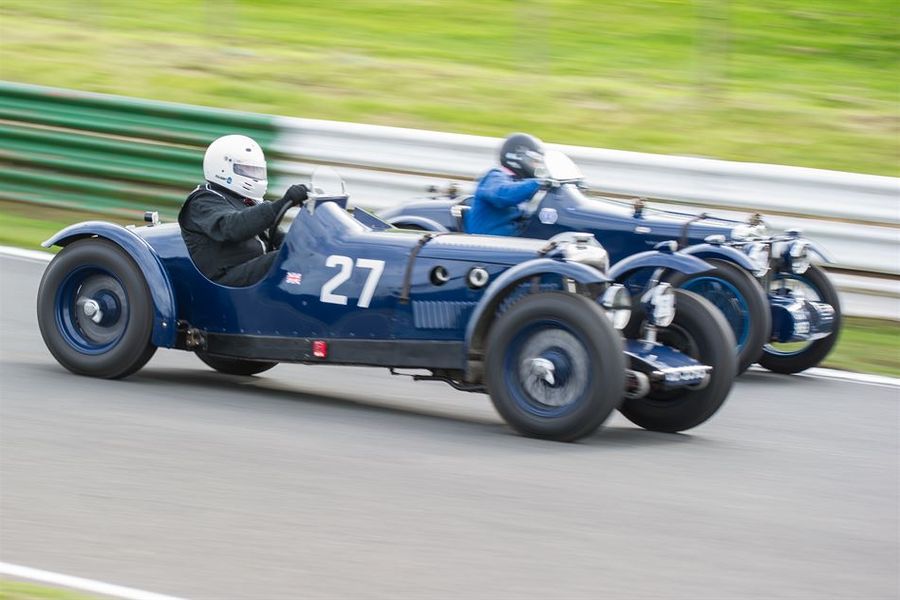 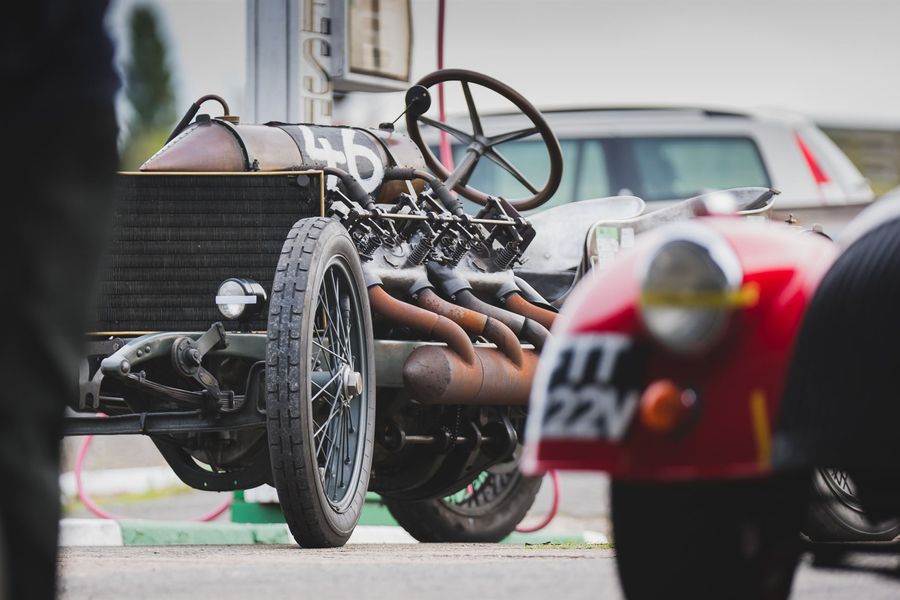 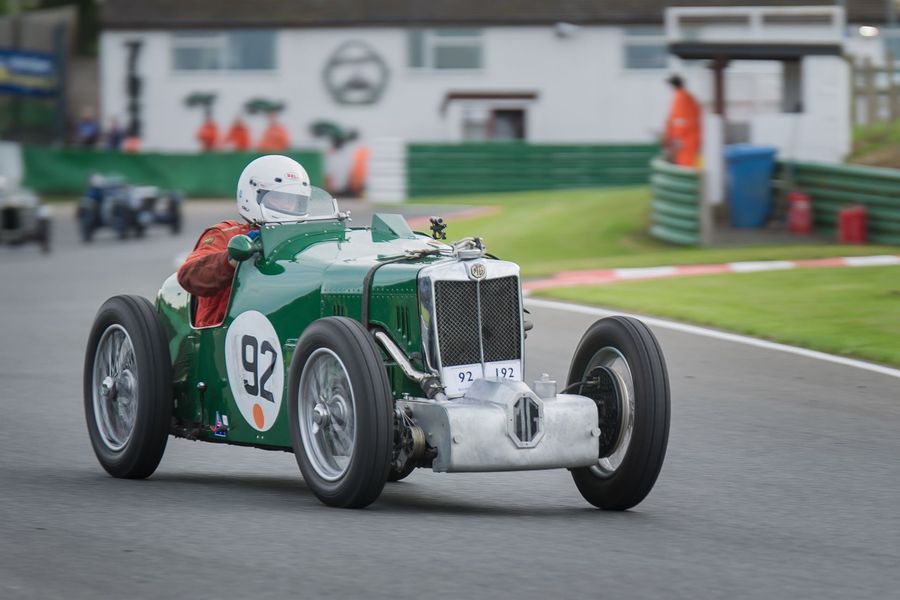 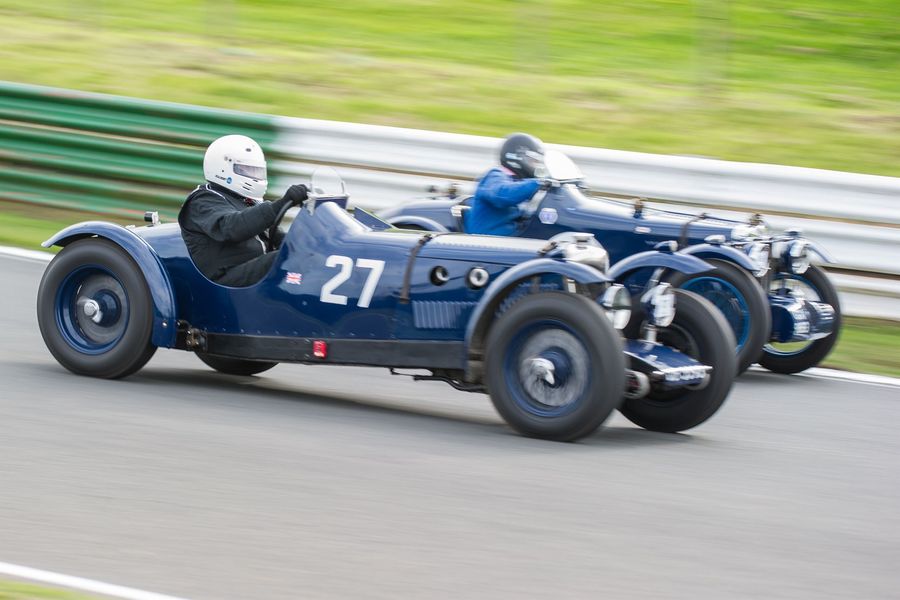 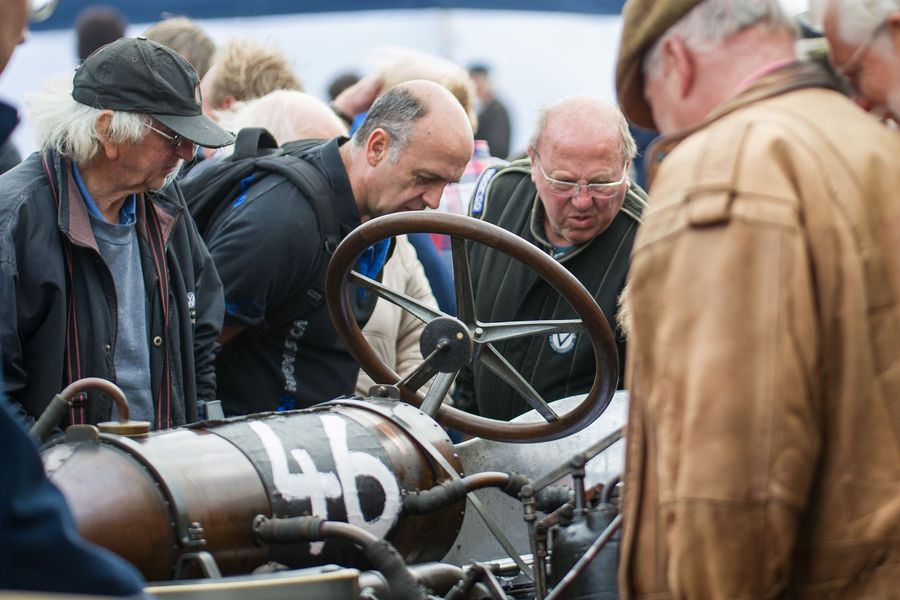 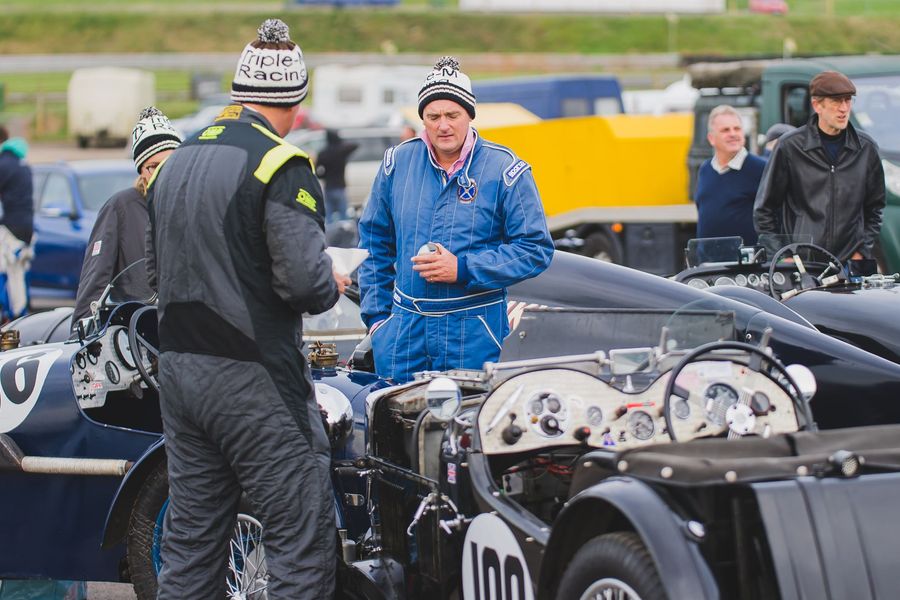 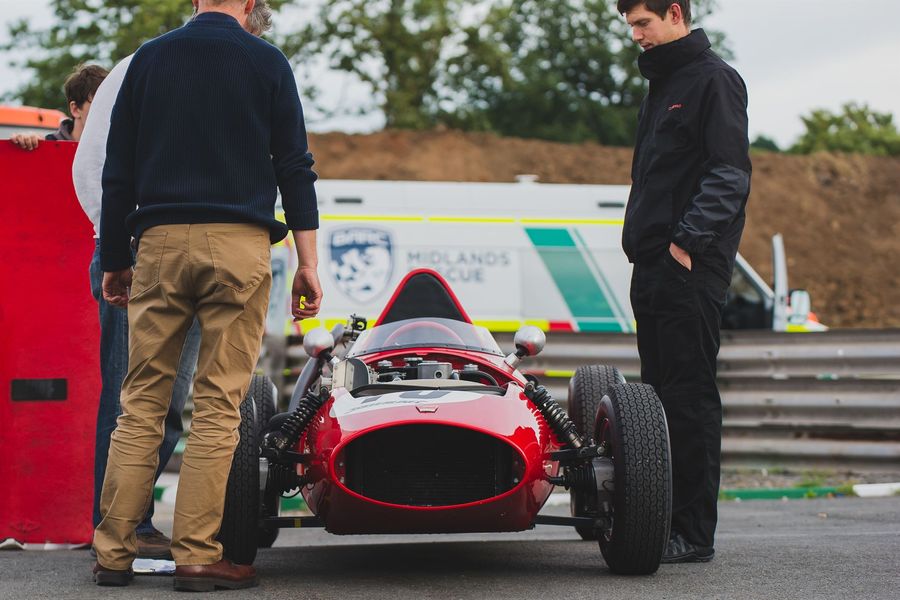 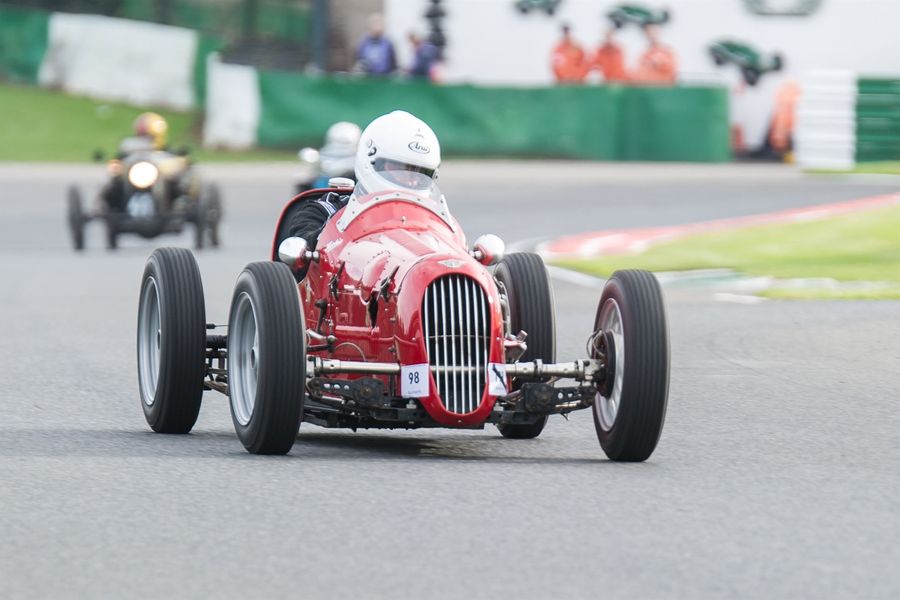 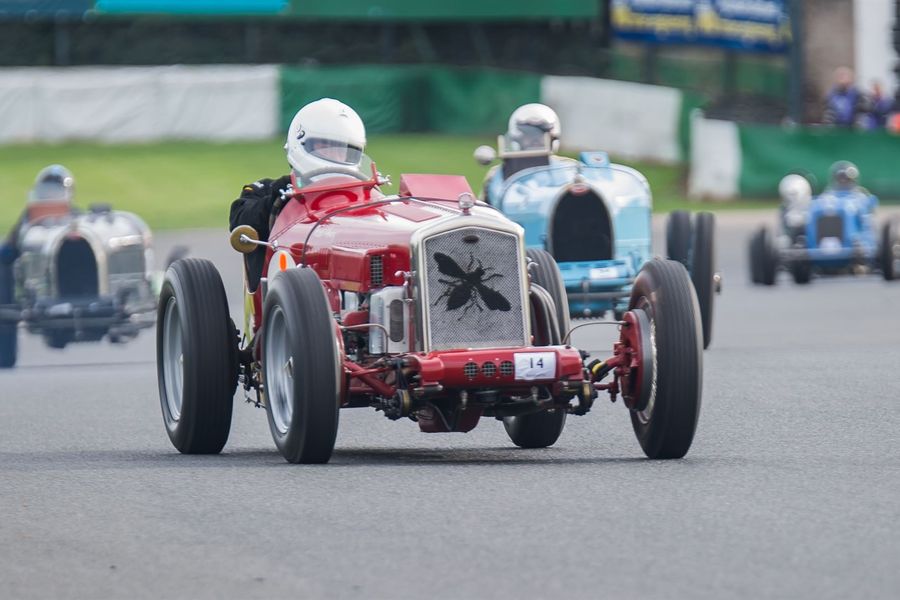 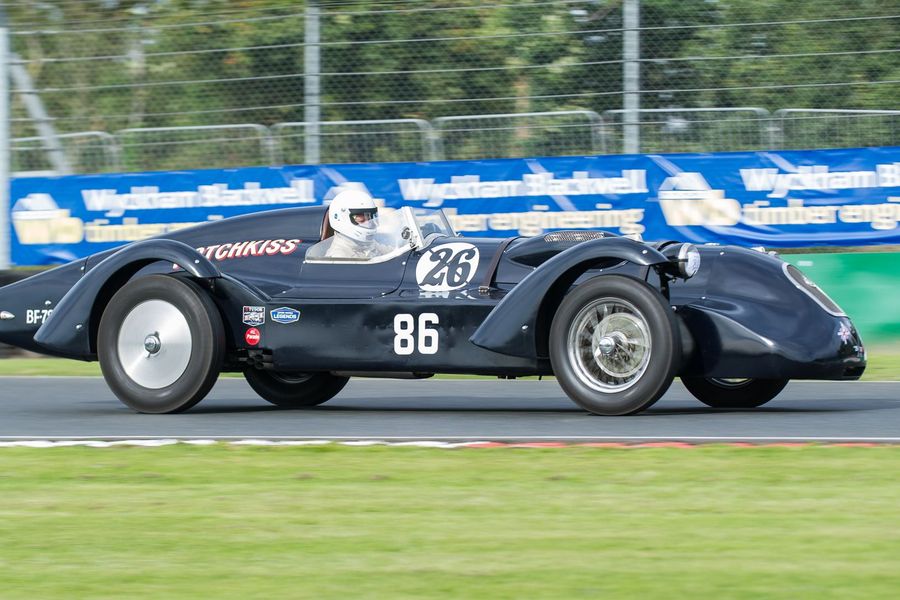 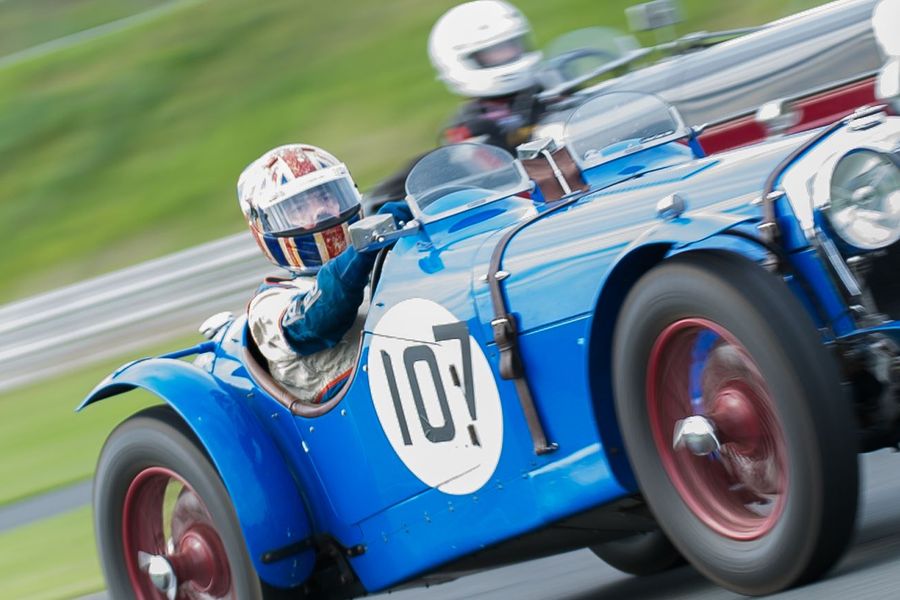 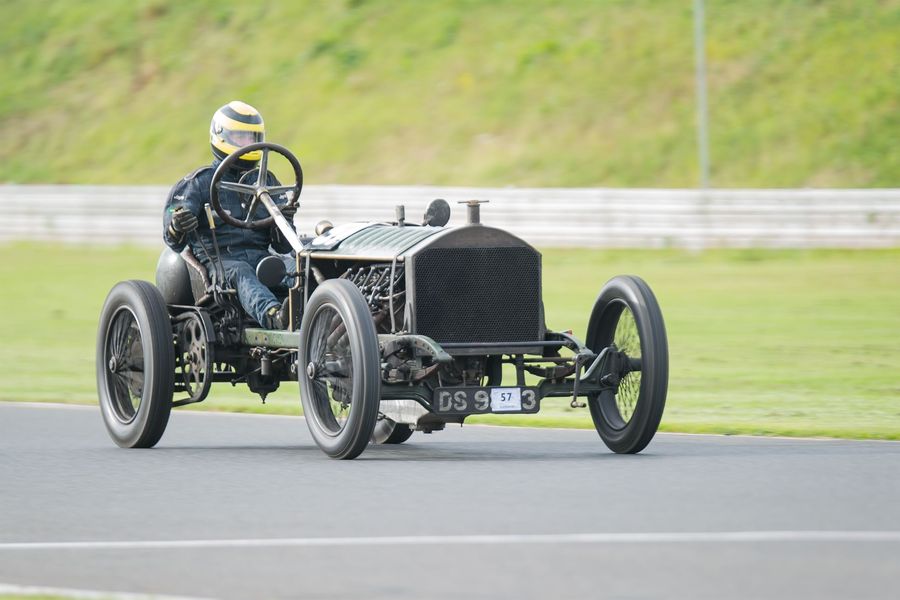 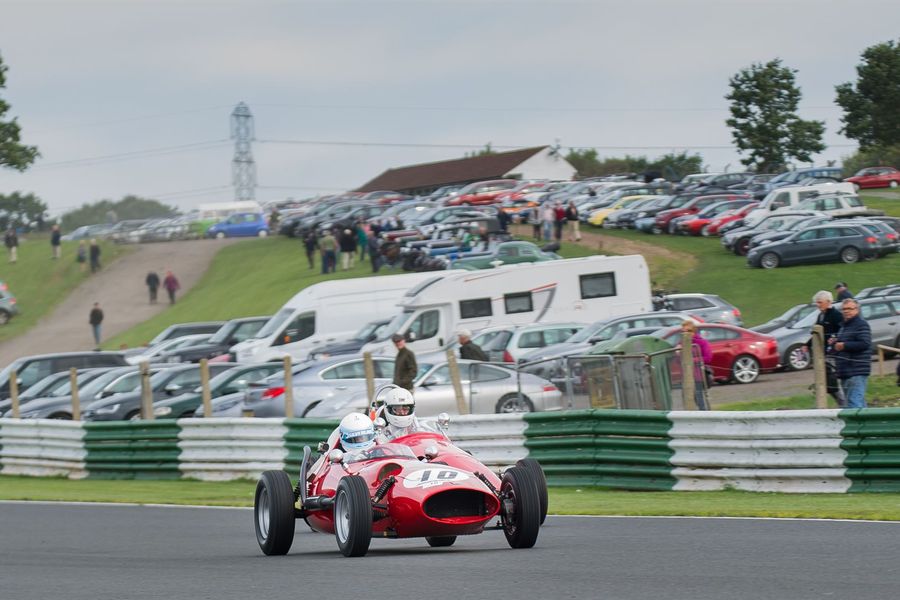 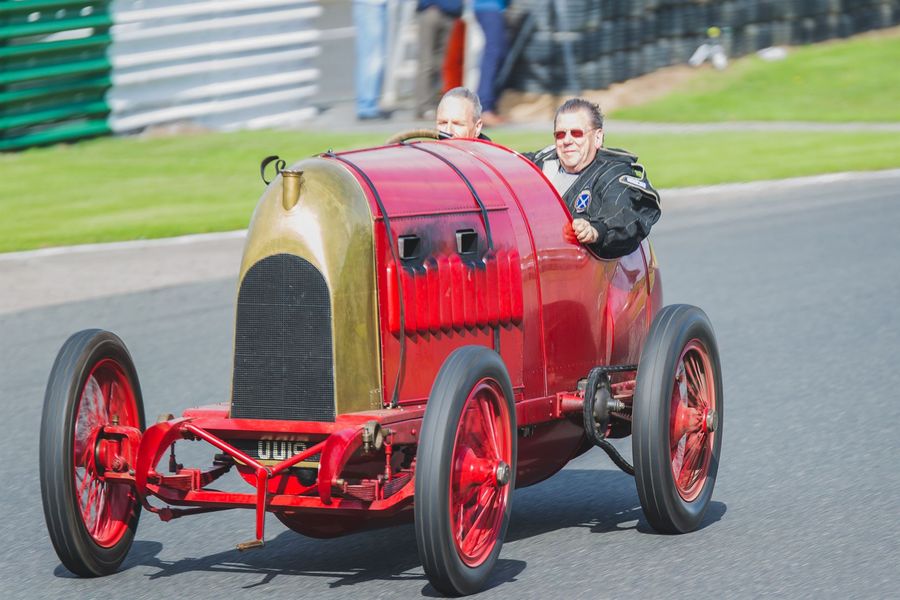 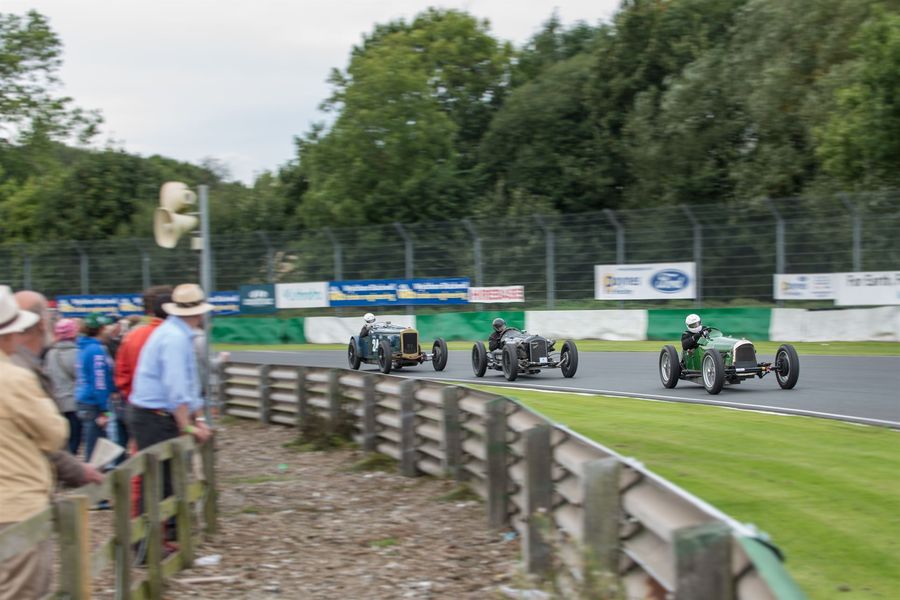 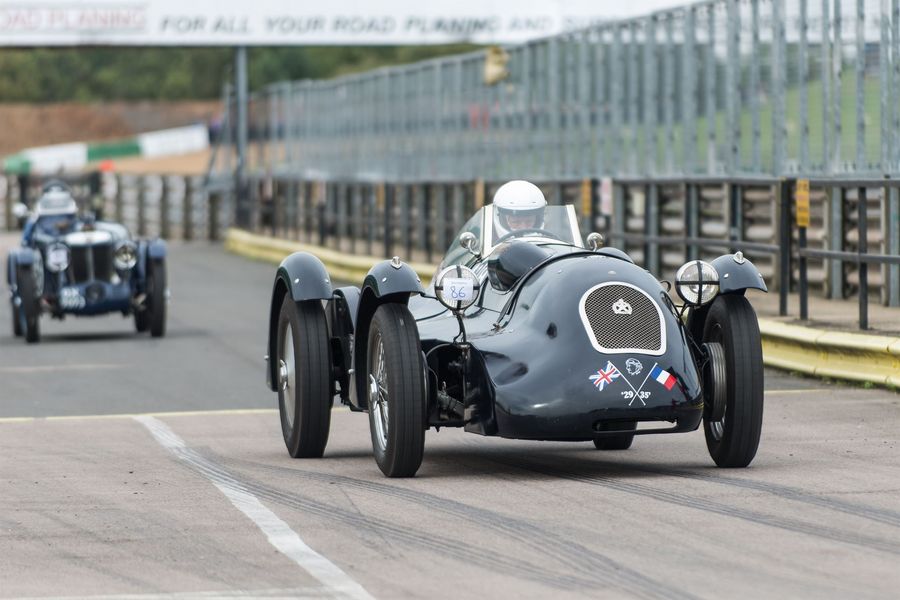 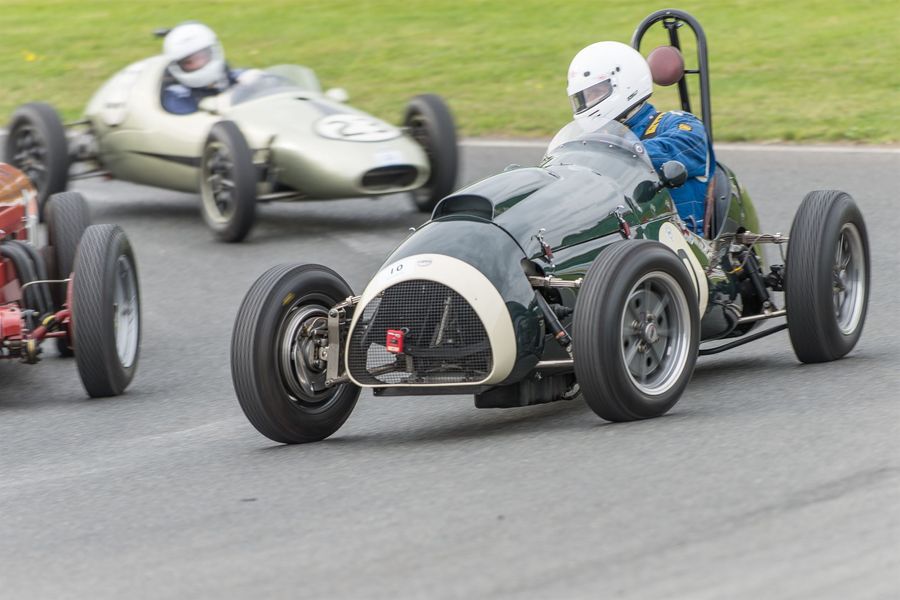 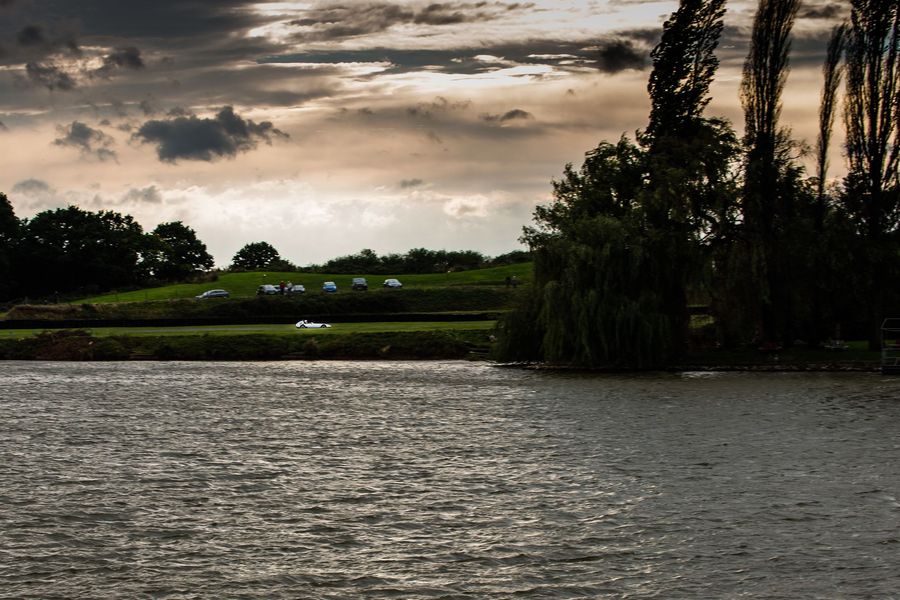 Click on the Gallery tab for Mike Groom's pictures from Mallory Park!
The Vintage Sports-Car Club enjoyed an epic season finale at Mallory Park, with its annual Bob Gerard Memorial Trophies at the popular Leicestershire venue on Saturday 24th of September. Boasting another eclectic 11-race programme of events for pre-war and historic racing and sports-sars, it was local Arnesby-based racer Tony Lees who epitomised the day with impressive performances in three very different cars, including his imposing 1913/18 Vauxhall Viper Special in the club’s much-celebrated annual Edwardian Handicap Race.
There was disappointment during the morning’s Practice Qualifying when Mark Walker’s revered 200HP V8 Darracq – the 1905 Land Speed Record car – spectacularly shedded a cloud of engine parts, before he brought the car to a safe and controlled stop trackside. Significant damage to a pair of pistons and the cylinder block brought its day to an abrupt end - see our separate story: http://bit.ly/2dktCIp.
The withdrawal left Lees in the Viper and Richard Scaldwell’s De Dietrich 130HP ‘Course’ to start at the back of the Edwardian grid as the clear pace-setters amongst a capacity line-up of pre-1918 machinery.
The pair were inseparable as they made impressive progress through the field before a terrifying moment for Lees as he touched the grass on the outside at Devil’s Elbow on the final lap; he showed tremendous skill to control the Edwardian leviathan through multiple ‘tank-slappers’ through the gravel before returning to the track and safely finishing down the field.
Scaldwell’s charge continued ahead but he was unable to chase down eventual runner-up, Peter Wilson in the 1917 Brasier, nor the Dick Baddiley Trophy and race winner, Ben Collings in the 1903 Mercedes 60HP – the oldest competing car.
Lees tasted success earlier in the afternoon in the highly-anticipated Vintage race, claiming his third victory of the season in his ex-Ron Footitt 1925 AC/GN ‘Cognac’. From the start, Lees hounded series rival, Tom Walker in the Amilcar-Hispano before mechanical woes forced the latter to retire, leaving Lees to hold off the challenge of the ‘Chain Gang’ pairing of Charles Gillett’s Frazer Nash Super Sports and Dougal Cawley’s Ford-engined GN ‘Piglet’.
The race was curtailed on lap 7 following an unfortunate roll-over incident for the experienced Sue Darbyshire, when her Morgan Super Aero hit a patch of oil at Devil’s Elbow. She was transferred by ambulance to hospital and was discharged later in the evening, battered and bruised but otherwise without serious injury.
To complete his hat-trick of machinery, Tony Lees took part in the invited AR Motorsport Morgan Challenge Series in his 1976 Morgan Plus 8, claiming a creditable fourth place finish, behind winner Russell Paterson, chased home by son, Elliot, the 2016 Challenge Series winner.
ERA pilot, Nick Topliss completed his VSCC Race Season in style with two victories on the day in the ex-Bob Gerard R4A, including the title Bob Gerard Trophy feature for Pre-1961 Racing Cars ahead of defending champion, Duncan Ricketts in David Baldock’s Alta and Terry Crabb’s sister car R12C. He also took victory in the day’s last Pre-war Scratch after a hard-fought battle with the Frazer Nash Norris Special of Julian Grimwade.
The Pre-war Sports-Cars ranks did not fail to entertain with two more well-supported grids for standard and modified, and special road-going machinery. The former saw Andrew Mitchell repeat last year’s Mallory Mug success in his HRG 1½ Litre ahead of podium regular, Mark Brett’s Ballamy-Ford V8, whilst Dougal Cawley wrapped up his season with his fourth ‘Special’ win out of five races this year in the all-action ‘Piglet’.
Following trophy success at Cadwell Park in July, Eddie Williams continued his winning form this season with victory in the opening Pre-war Handicap, also receiving the Burghley Trophy as the first Austin 7 in his 1930 Rolt Ulster, with Douglas Martin scoring the day’s other Handicap win in his American 1937 Hillegass Sprint Car. Elsewhere, VSCC teenage ‘hotshot’ Harry Painter continued to demonstrate his prowess in the family’s MG racers, with Novice Race success in the Kayne Special.
There was drama too in the invited Formula Junior race, as a full grid from the celebrated FJHRA ‘Silverline’ front engined series joined the VSCC for their annual outing in the John Taylor Memorial Trophy. Following his recent Goodwood Revival disappointment, Stuart Roach was again denied a challenge for victory as his Alexis Mk 2 spun and lost a wheel, coming to a stop at Gerard’s beside father, Keith’s Gemini Mk II, which had expired on the green flag lap. That left Chris Drake to enjoy a relatively comfortable victory in the Terrier Mk 4 Series 1, a repeat of the car’s debut winning performance last year.
The day attracted one of the strongest spectator attendances of the year for Mallory Park, many arriving in pre-war and classic machinery, which were all parked in a dedicated display overlooking the start/finish line.
In addition to the thrilling on-track action, spectators also enjoyed free access to the competitor paddock, buoyed by a friendly ‘end of season’ atmosphere, led by the club’s Principal Associates, Bonhams, who supported the main Edwardian feature, complete with display cars and Jazz Band. There was also a welcome parade during the lunch break for Duncan Pittaway’s well-celebrated 1911 Fiat S76 ‘Beast of Turin’.
Mallory Park VSCC Gallery