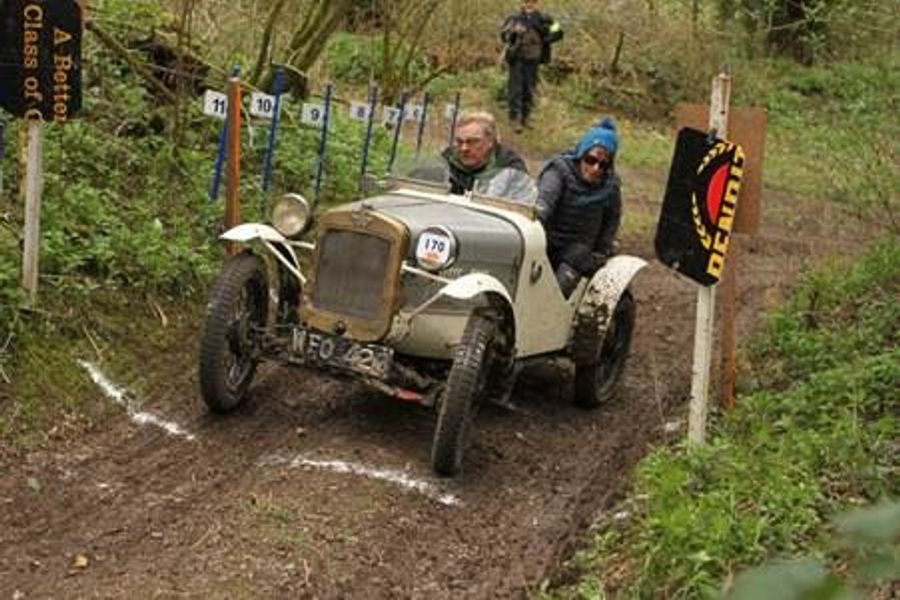 Click on the Video tab for amateur footage of the VSCC's November 2016 Prescott event - a taste of vintage trialling!
Donald Skelton and Paul Jeavons have been confirmed as winners of the 2016/17 VSCC Annual Trials Championships, which concluded with the club’s annual Scottish Trial in Biggar, Lanarkshire last month.
Following a committee decision to realign the club’s ever-popular Trials Season, the specially extended season ran from last year’s Exmoor Fringe Trial through to the recent Scottish, comprising 11-events in total with the best ten scores to count towards the final standings, with traditional bonus points accrued for participation in events ‘north of the border’.
Including long-standing events in Exmoor, Derbyshire, Herefordshire, Scotland, Wales, the Lake District and Cotswolds, it was another tightly fought contest across one of the VSCC’s most popular disciplines, with more than 100-entrants at almost every round.
As ever, the highly competitive machinery of the Modified & Special Short Wheelbase class led for much of the way, as several front-running Austin 7 Specials battled with other more modified challengers from the likes of Ford, Frazer Nash, GN and Riley. Having triumphed on three occasions in the past seven years, Donald Skelton returned to the top of the standings once more to claim the Hagerty Trophy in his Austin 7.
The equivalent Long Wheelbase class competition proved a two-horse race for much of the season, as the Vauxhall 30-98 of reigning champion, Paul Jeavons was pushed all the way by Jonathan Miller in his Chrysler 66 Sports. The pair traded several victories throughout the season with Jeavons’s ever-consistent performances rewarding him his third Frost Trophy victory.
TRIALS TROPHIES 2016/2017 – FINAL SCORES
The Hagerty Trophy
1 Donald Skelton 3386
2 Ian Webb 3237
3Peter Kite 3236
The Frost Trophy
1 Paul Jeavons 2960
2 Jonathan Miller 2868
3 John Chilman 2825
There was similar excitement amongst the Standard cars this year with a host of more original machinery regularly taking part at each trial. In the Short Wheelbase class, David Rushton and Charles Gillet went head-to-head, with the former’s MG M Type coming out on top against the Bugatti Brescia. A regular amongst the Long Wheelbase line-up in his Ford Model A, Dennis Bingham led the way once more, his impressive season total enough to place in the Top 5 of the Modified standings.
STANDARD CLASSES 2016/2017 – FINAL SCORES
Class 1a – Short Wheelbase Cars
1 David Rushton 2432
2 Charles Gillett 2390
3 Nicholas Beck 1298
Class 2a – Long Wheelbase Cars
1 Dennis Bingham 2206
2 John Dobson 2075
3 Matthew Roberts 1437
The club thanks member and Trials Marshal, Peter Livesey for again collating scores on behalf of the club and all those who competed or marshalled across another successful VSCC trials campaign.
The next VSCC Trials Season will begin in the Autumn with the club’s historic Welsh Weekend in Presteigne on 7th/8th October.