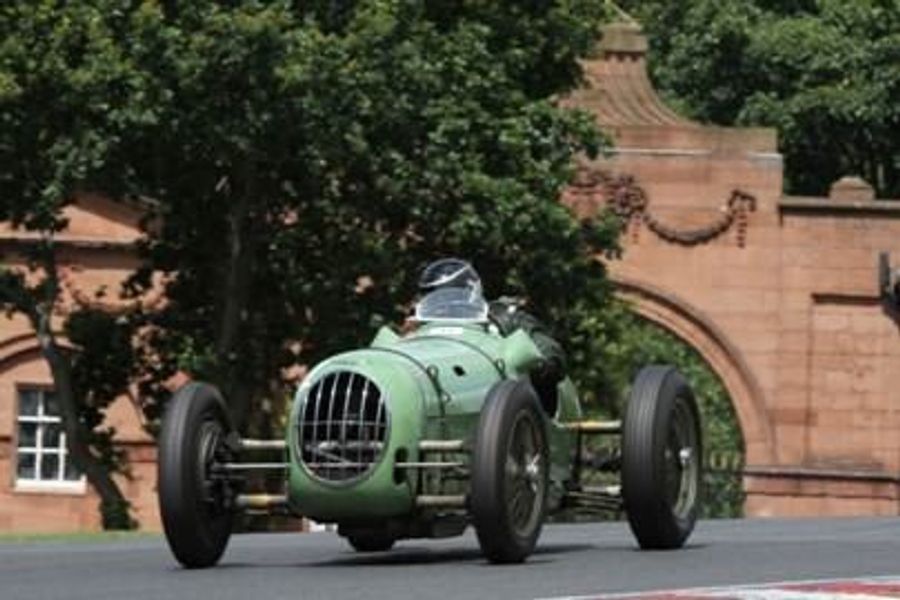 The VSCC head to Oulton Parkt his weekend - Saturday 21st of May - for the Hawthorn Memorial Trophies Meeting,. Having returned to the Cheshire circuit after a four-year absence last season, the club return wit the traditional VSCC ‘Sets’ for all Pre-war cars, their new Novice Race taking centre stage, plus invited guest grids from the HRDC, 500 Owners Association and Morgan Three Wheeler Club.
The VSCC Hawthorn Memorial Trophies are amongst the club’s most prestigious silverware, with some of the trophies the very same awarded to  Mike Hawthorn in period.
Vintage Racing Cars will contest the Boulogne Trophy Race – the highly prized bronze statuette a favourite of the club’s collection for many. If last year’s edition is anything to go by, this will be another classic feature with wheel-to-wheel action guaranteed.
The Hawthorn Memorial and Spanish Trophies Race have been a VSCC feature for 30-years, and will again accommodate the Pre-1961 Racing Cars in another stunning Pre- and Post-war gathering.
The Bill Phillips Trophy Race is sure to attract another full grid of Standard & Modified Pre-war Sports-Cars whilst the Special Pre-war Sports-Cars will enjoy the Oulton Park Trophy Race.
As ever, Pre-war fans will also enjoy full grids competing in the ever-popular All-Comers pre-war Short Scratch and Handicap formats.
New for this year is a Novice Short Scratch Race, specifically aimed at club members who are relatively new to racing with the VSCC and looking to gain some more track experience in their Pre-war Racing or Sports-Car.
The VSCC 2016 race season will also see a host of invited grids as part of each of their race days, with a number of celebrated clubs and series scheduled to take part, At Oulton Park there will be the F3 (500) Racing Cars, always a popular addition to the paddock and the Morgan Three Wheelers, a change from their traditional spot at the VSCC’s annual Cadwell meeting.
There will also be two grids from the HRDC, including their celebrated ‘Allstars’ for Pre-1966 Sports, GT & Touring Cars and ‘Academy’ for Austin A30/35 2-door Saloons, including the HRDC A-Series Challenge for BMC A-Series-powered Cars.
Aside from the action on track, the day at Oulton Park will again offer spectators all that is great about attending a VSCC race meeting, with open access to the paddock, where you can get up-close to the cars and drivers, an AutoSolo competition – taking place during the morning – the traditional Cheshire Life Concours, onsite catering facilities and a busy trade village – whether looking for that vital car part for your own restoration or finding a gift for a motorsport enthusiast, you are sure to be able to find something.
Amongst the other 'Vintage' themed highlights organised by circuit owners MSV will be a static display Spitfire with Merlin engine demonstrations throughout the day, an Air Display, traditional Pimms & Cream Tea Tent, Children’s Funfair and Live Jazz Band.
Practice will get underway at 9.00am with racing commencing after the lunch break at 1.00pm.
Oulton Park VSCC Hawthorn Memorial Trophies Meeting