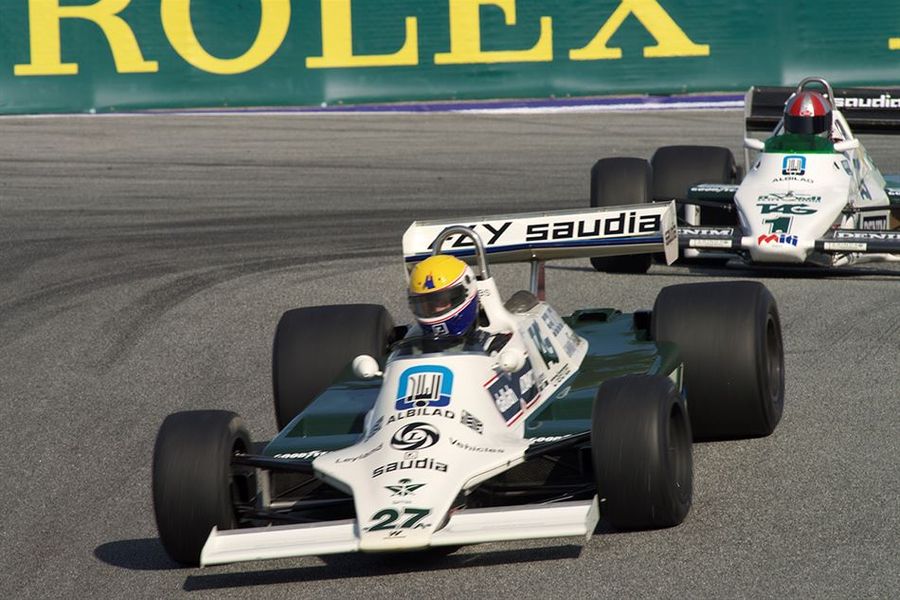 Charles Nearburg was the star of the Rolex Monterey Motorsports Reunion at Mazda Raceway Laguna Seca as the Texan scored victory in both Masters USA races against a grid of 36-Formula One cars as the North American series continues to grow. Nearburg topped qualifying in his ex-Alan Jones Williams FW07, with the chasing pack led by four-time Motorcycle Grand Prix champion Eddie Lawson in his Wolf WR4.  Masters newcomer Erich Joiner put his ex-Keke Rosberg Williams FW08C in third slot, while former Larrousse and Pacific Formula 1 driver Jean-Denis Deletraz was the best of the European visitors in Fred Fatien’s Surtees TS19 followed by Andrew Beaumont (Lotus 76) and James Hagan (Tyrrell 011). Under sweltering skies, Nearburg led the pack away from pole and never looked like being headed as he stormed ahead of the field and controlled the pace race-long. Erich Joiner chased hard, ahead of Eddie Lawson, while Danny Baker held on to fourth place until lap nine, when the car stopped, apparently out of fuel. That brought out the safety car, which stayed out until the end of the race, securing the win for Nearburg from Joiner and Lawson. With Baker's demise, Nick Colyvas took fourth from eighth on the grid, as Duncan Dayton also showed good pace in his ex-Mario Andretti Lotus 79 to make his way from 15th up to eighth.  However, on-track infringements led to subsequent grid place penalties for Cal Meeker (Williams FW08), Andrew Beaumont (Lotus 76), Jean-Denis Deletraz (Surtees TS19), Brian Blain (BRM P207) and Mike Thurlow (Tyrrell 009) for race two. Nearburg had to work harder in the second stanza, as he was pushed hard by Joiner who stayed much closer to the Texan than he had in race one. Nearburg, though, in the Patrick Head-designed Williams, was unstoppable and continued the form that has made him the benchmark driver in Masters USA at Monterey. Eddie Lawson was set for a podium finish in third, but mechanical gremlins stopped him with just five minutes to go, allowing Nick Colyvas to secure the final podium place. Martin Lauber (Wolf WR6) and Cal Meeker (Williams FW08) were not far behind him, and Danny Baker had a better race, making it up to a superb eighth overall having started 30th on the grid.  The next stop for Masters USA is at Sonoma Raceway for the CSRG Charity Challenge on October 3/4.