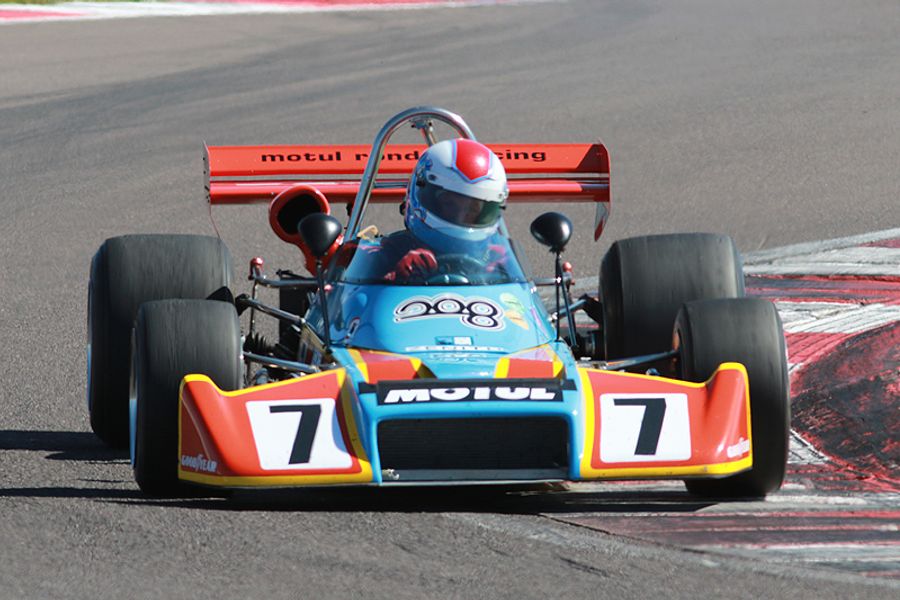 The searing heat of central France was a massive factor at the Grand Prix de France Historique at Magny Cours (28th-30th June), the setting for rounds five and six of the Historic Sports Car Clubs Historic Formula 2 FIA International Series. However, through the challenge in style came David Tomlin to score a fabulous double victory in his Motul.

As the series reached the mid-point of the six-event, 12-race schedule, a superb grid of over 35 cars was among the highlights at one of the most prestigious historic racing festivals in France. The Historic F2 grid made a fabulous spectacle during what is already proving to be the categorys best-ever season.

However, as ambient temperatures topped 40 degrees, many teams and drivers struggled to keep engine temperatures to realistic levels and numerous cars were affected by the heat.

Martin OConnell (Chevron B40) set the pace in qualifying but Tomlin gave notice of his intentions for the weekend by being second fastest, a week on from rallying his Ford Escort Mk2 in the dusty forests of South Wales. Series newcomer Alain Girardet (March 77B), Mark Hazell (March 782) and Frazer Gibney (Chevron B40) completed the top six as many drivers ran only a handful of laps due to the heat.

In Saturdays opening race OConnell set the early pace but was forced to drop out after six laps, leaving Girardet ahead until Tomlin dived ahead on his way to a superb victory in trying conditions. Still running strongly in the closing stages was Matthew Wrigley (Chevron B42) and he quickly deposed Girardet to finish less than two seconds down on Tomlin after 25 minutes of racing. It was a good day for the French racers as class victories went to Robert Simac (March 712) and Olivier Huez (March 722) as well as Australians Martin Bullock (Chevron B34) and Steve Weller (Elfin 600B).

On Sunday, Tomlin made it two out of two by leading from start to finish. However he could never relax as Wrigley led the chase early on before having to give way to the flying March 77B of the impressive Laurent Vallery-Masson, who grabbed a strong second place on his debut in the category. After a mid-race safety car, barely a second covered the top three cars in a tense finish while Charles Veillard (Ralt RT1) and Hazell were not far back in fourth and fifth. From the back of the grid, OConnell stormed up to fourth in seven laps but was then forced to retire again.

The Historic Sports Car Clubs Historic Formula 2 FIA International Series now switches to the Silverstone Classic (26th-28th July) for rounds seven and eight, with an incredible entry of over 65 cars.