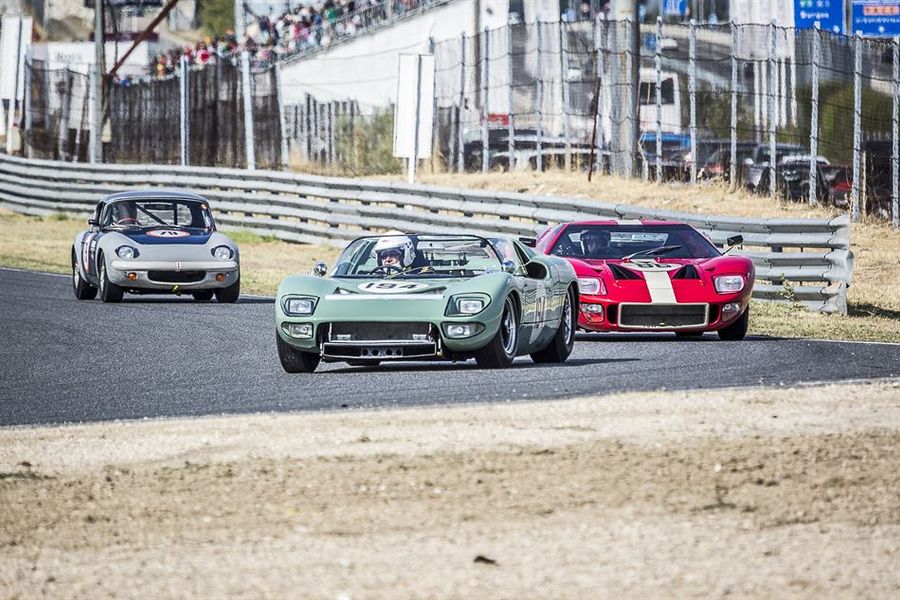 David Forsbrey and Andy Newall (Ford GT40) took a comfortable win in the Masters’ Three Hours race at Jarama last weekend, as the challenge of their rivals Rui Macedo Silva/Pedro Macedo Silva/Joaquim Jorge (Ford GT40) faded away when Joaquim Jorge – at the wheel of another car during Sunday’s first stint – contrived to hitting the car that he was going to take over later on in the race! Forsbrey/Newall were leading by a sizeable margin when Jorge’s self-inflicted injury occurred, but it made their work easier than expected.
“It was a new circuit for both Andy and me,” said Forsbrey. “A challenging circuit, a physical circuit, almost like a mini-Nürburgring to me. It was more fun driving with the cars from the Spanish championship. The car was absolutely faultless, I could run for another three hours!”
“I was trying pretty hard,” said Newall when asked about his final stint. “I was looking at the pit board to the guy in second place, and just kept the gap. It was the plan that David would create a gap in his opening stint on Saturday, and that worked to perfection. The car was brilliant, Gelscoe do a really good job with them.”
The Jarama Three Hours was run over two 90-minute heats, one of Saturday afternoon, the other on Sunday morning. Seven cars completed the first heat, with James Hagan returning to the pits after seven laps, and then again after 10 laps, complaining of burns to his back in the new Ginetta G4R built up for him and Ron Maydon by Jonathan Lewis’ Snetterton Speed Shop.
At the front, the Forsbrey/Newall GT40, with Forsbrey at the wheel, opened up a lead of a minute over the Portuguese GT40 with Rui Macedo Silva driving. Macedo Silva was the first to pit, handing the car to Pedro, the quicker of the two Macedo Silvas, who then trimmed down Newall’s lead to 39 seconds at the flag.
The Chris Chiles Snr/Chris Chiles Jnr AC Cobra ran third throughout, as the fastest car in the GTA class, to finish a lap down. Nigel Greensall brought the Lotus Elan 26R up to fourth after Graham Wilson had come in for the driver change from seventh place. Greensall was only trailing the Gary Spencer-prepared Cobra by 13 seconds.
The two Mark Martin/Andrew Haddon cars in the entry were split by the Keith Ahlers/Billy Bellinger Morgan SLR, their Elan in fifth, two laps down, and the Lotus Cortina in seventh, three laps down.
The second heat began with the GT40s leading away again, while Graham Wilson started his Wolfe Manufacturing-run Elan 26R from the pit lane. Only a handful of minutes into the race, however, the GT40 battle was over when Rui Macedo Silva was hit by an Escort RS, one of the Iberian cars running concurrently during the first half hour. Ironically, the culprit proved to be Joaquim Jorge, the man who was down to take over Macedo Silva’s GT40 later on! Jorge was given a drive-through penalty for his misdemeanour, while Macedo Silva continued in fourth place.
With 20 minutes gone, Andrew Haddon challenged and passed Chris Chiles Snr for second place, while James Hagan got ahead of Billy Bellinger to take fifth place. At the opening of the pit window, Graham Wilson had worked his way up to seventh, overhauling both Mark Martin in the Cortina and David Hathaway in the Triumph.
While the Forsbrey/Newall GT40 continued to lead imperiously, the battle for second place was on, as Joaquim Jorge closed on Mark Martin – now in the Elan – while the Chiles/Chiles Cobra wasn’t far away either. With 15 minutes to go, Jorge was past and seemed set for second place in the second heat but towards the end, an error by the Portuguese dropped him out of reach of the Cobra.
Andy Newall reeled off the final laps to take a comfortable win, while the Portuguese open-top GT40 took second place on aggregate, ahead of the Classic Racing Cars Cobra.
The battle for GTA class honours proved to be fairly tight, as Nigel Greensall rose up to fifth overall in the second heat but with the Martin/Haddon Elan well out of reach. On Saturday, it had been the other way around. In the end, Mark Martin and Andrew Haddon clinched it by 24 seconds. Keith Ahlers and Billy Bellinger finished third in class, and sixth overall, while the Martin/Haddon pair also took touring-car honours, their Lotus Cortina finishing in seventh overall.
The Hathaway/Dwane Triumph was fourth in the GTA class while the Maydon/Hagan Ginetta G4R was unclassified because of its retirement from Saturday’s heat.
GT40 Ford GT40 Jarama Three Hour Jaram