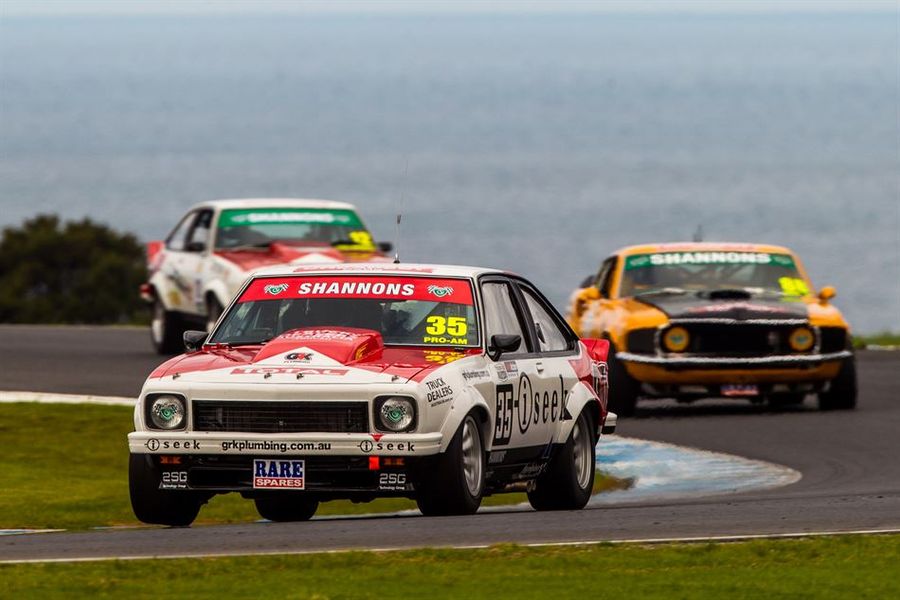 Phillip Island’s notorious weather got in the way of establishing a clear form guide for this weekend’s Shannons TT – the sixth round of the 2016 Touring Car Masters series - in today’s two practice sessions. The only constant was the fact that it was a Holden topping both sessions today at the Victoria circuit – Torana ace Jason Gomersall fastest in a mostly dry opening practice and Brett Youlden’s Monaro quickest in the wetter session later in the afternoon.
Gomersall’s practice 1 benchmark was a quick 1m42.28s – less than a second behind the current Touring Car Masters lap record at Phillip Island, set by John Bowe in last year’s season finale. Bowe shaded Gomersall in the opening session with Andrew Fisher third in the Jesus Racing Falcon GTHO. Tony Karanfilovski and Jim Richards completed the top five.
Lap times were more than 12 seconds slower thanks to the rain that fell before and during practice two, however former Phillip Island TCM winner Brett Youlden didn’t seem to mind the inclement conditions and vaulted straight to the top of the charts early in the session.
His 1m54.14s lap was good enough to last as the quickest time all session, fellow Victorian Eddie Abelnica proving the prowess of the Melbourne’s Cheapest Cars XB Falcon in the wet thanks to the second quickest time. Steven Johnson, Andrew Fisher and John Bowe completed the top five in the wet session.
Other notable performers today included Keith Kassulke (7th in the dry and 9th in the wet), Rusty French (10th and 8th) and Mark King, who ended up 6th in the rain in his Whiteline Racing Camaro.
Adam Garwood was quickly up to speed in his 'replacement' Holden Torana A9X Hatchback, lapping 10th fastest in the second session.
Saturday's action includes qualifying (11:30am) and Race 1 (3:40pm),
Jason Gomersall notorious weather Brett Youlden Shannons TT 2016 Touring Car Masters series Phillip Island Holden