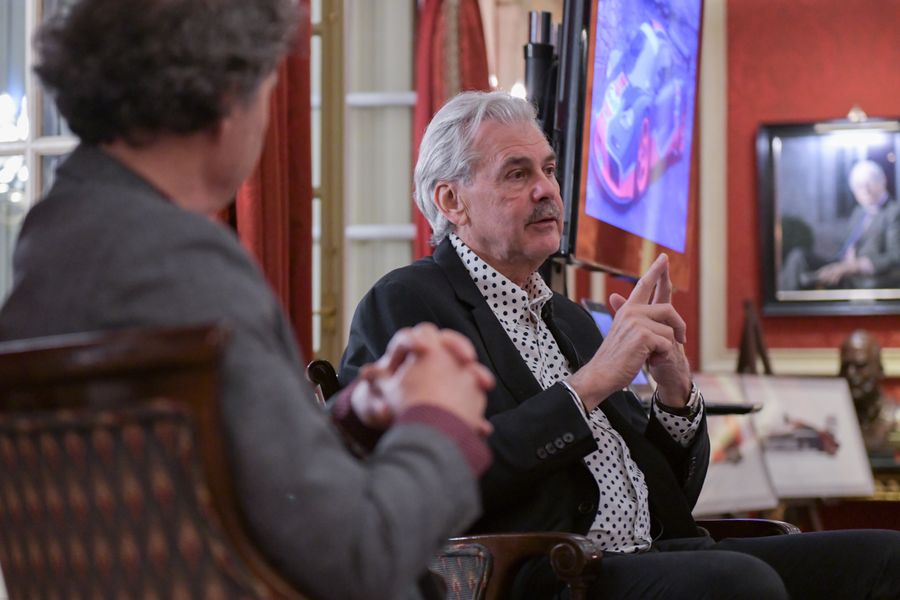 Sometimes the weight of expectation is just too great.  Film, play, book; all can be overwhelmed by the pre event hype. Not so with this magnum opus. 'One Formula' is the story of Gordon Murray's life to date, written by Porter Press supremo Philip Porter, and this book certainly covers its subject in very considerable depth.

The whole book is helped along by the fact that Gordon Murray is such a nice man, and comes over as such. It was Oscar Wilde who said (of a fellow writer) 'he is a modest man but he has much to be modest about'.  This is absolutely not the case here, Murray is not overly or falsely modest but his achievements are huge and need no explanation on these pages. But Gordon Murray is not one to blow his own trumpet either and the mixture of telling it like it is and letting the reader decide just what is important is gloriously gratifying.

The biggest single point of this two-volume book, is that its subject never throws anything away. Murray's archive is huge and the book starts with an in depth look at the IGM T1, his first creation created to run as a race car in his native South Africa. The fact that he has retained all the notes, drawings, photographs and results for this car sets the scene on the direction that the book is going to take.

It is true that sometimes a biography is about someone who has a single high-point in their lives and that everything is leading up to,or down from, that point. Not so with Gordon Murray! Every chapter, almost every page, covers something that most designers would be happy to show as a career highlight but, as an example, early in Part One of this two part book, the Duckhams-Ford which Gordon designed for Alain de Cadenet in 1972 is featured. Because of the attention to record keeping, he is able to produce private photographs, design blueprints, newspaper cuttings, pages of notebooks and so much more. This car would be significant in anyone's career but for Gordon Murray is just one of so very many. This car alone fully deserves the thirty eight pages of this large format book which it occupies. Another car from 1972 was an adaptation of a Ron Tauranac design, the Brabham BT36X. Converting a Formula Two BT36 into a Repco V8 powered hillclimb car fell solely to a young Murray, newly on the team at Brabham. "Tauranac stood in front of me and said 'for the money he is paying us, we've got about a week to design this. If it's more than a week we are not going to make any money on this. You're doing it!"

The Formula One story gains momentum at Brabham, firstly under the ill-starred partnership of Ron Tauranac and Bernie Ecclestone before Bernie bought Ron out and the latter-day Brabham team came about - interestingly in a current context, with a total team, including office staff of 18 people. In 2019 Mercedes GP are said to employ over 1000! The sublime BT44 is chronicled in detail as are the Alfa Romeo years and, of course, the BT46B 'Fan Car'. Volume One finishes the Brabham story with the BMW years, including the 'lowline' BT55 which was let down by the way the BMW engine had to be canted over to fit. Although the car was not a success, the seed had been sown in Murray's mind and he was off to McLaren...

The 1988 McLaren Honda MP4/4 continued the 'lowline' philosophy but with the altogether more suitable Honda V6 and it turned out to be one of the most successful Formula 1 designs of all time. Stories, drawings and photos from the McLaren racing years come thick and fast until 1992 where the McLaren F1 road car project started. Another ground breaking design is covered in depth and you get the feeling that this is perhaps one of Gordon Murray's proudest designs although, at the same time, was perhaps not ultimately the best working environment. Many HistoricRacingNews.com readers will also find the section on the creation of the F1 GTR race car interesting. Murray had deliberately set out to design a road car with no racing aspirations so as not to compromise the car, it was only due to pressure from owners who realised just how good the car was, that the GTR racer was produced. Interestingly once the car had been made compliant with the then-current GT regulations, it was slower than the road car! Murray talks about the naming of the car "F1 just seemed a logical name at the time; with all the copyright protection you would never get away with it these days".

Gordon Murray Designs still continues to produce innovative and creative designs. Typically much of this is aimed at helping the developing world, his OX utility go-anywhere low cost vehicle is being talked about as something which could truly change thousands, if not millions, of lives.