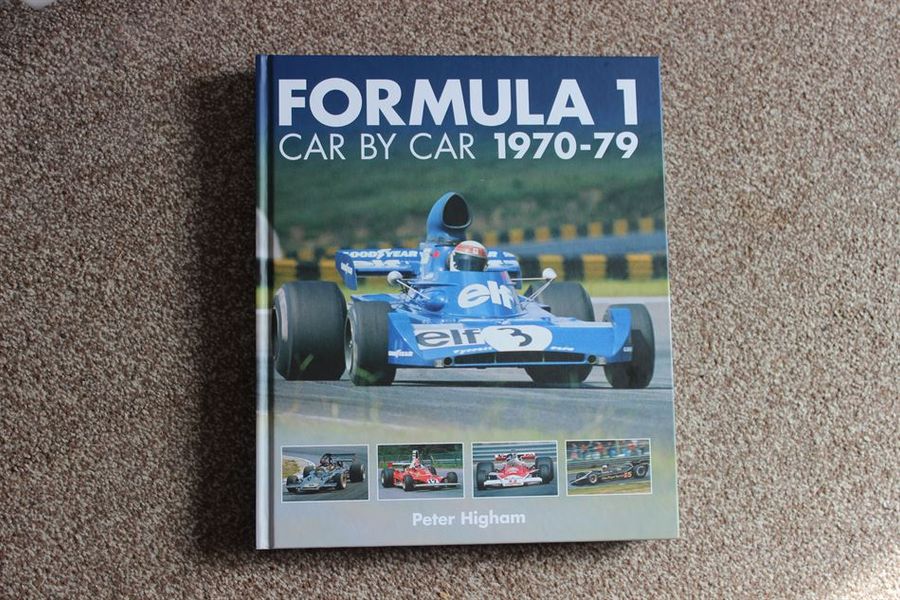 Formula One: Car by Car 1970-79 is the very much summed up by its title, a year by year journey through a turbulent decade, with teams big and small referenced, pictured and their results – or lack of them - cataloged.

The format is relatively straight forward, the book taking you through the decade year by year – each section starting with a summary of that season. The season summaries are entertaining on their own, the 1970s were a very political period - the 1973 intro even mentioning how journalists and even sponsors formed their own unions!

Author Peter Higham each year then goes through the teams, pretty much in order of success, the knowledgeable text outlining the team’s sporting, technical and political season. Some of the snippets tucked away in the text are true gems, such as a brief note mentioning that Ronnie Peterson tested at Lydden Hill prior to the 1971 Monaco GP, taking his March 711 round in 38.2 seconds!

The book also really gives a feel for how the sport changed in that period, not only with the cars, which at the start of the decade showed their 1960s roots, through to the very different and far more aerodynamically integrated machines that contested the final season, but also how he teams evolved. Early seasons show a merry-go-round of drivers at times, with 1972 seeing BRM announce a multi-car team at the start of the season which ultimately saw 10 drivers out in their cars, none of them contesting every race, while later on it is the more recognisable stable two driver squads down the grid.

The 720 photographs are superb, tracking chassis changes and improvements through the season at such a level that we failed to catch them out. Again, it was a time when teams did change cars mid-season, Embassy Racing with Graham Hill in their final 1975 season fielding two different Lola chassis before the T371 was badged as the GH1 for rest of the year.

As well as the big names and players of the period it gives recognition to some of the smaller, and in a few cases tiny, teams that made up the grids. South Africa was a rich source of small teams who would contest their home GP, Lexington Racing or Lucky Strike Scuderia Scribante ring any bells? There is even a picture Leo Kinnunen’s AAW Racing Ream Surtess from 1974, an outfit that even now does flicker the faintest of memories into life.

Each year is ended with tables showing each driver’s performance, the points tables, and list of race winners.

So, what do we think of it? Naturally, being motorsport anoraks we love the book, its sheer comprehensiveness, the depth of research, and its ability to bring back long-forgotten teams and drivers. Even if you were not about at the time for Formula One: Car by Car 1970-79 to bring back memories, as a taste of how motorsport was so very different in those years it is a worthy purchase.