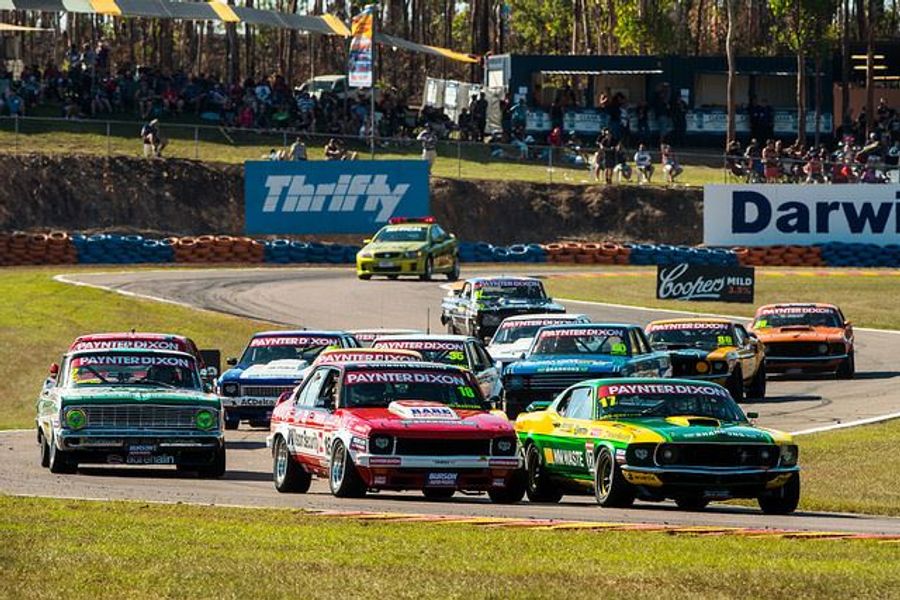 Steven Johnson has claimed his own slice of Paynter Dixon Touring Car Masters history, sweeping round four of the championship at Hidden Valley to become the first driver to win four consecutive rounds at the same venue. The WM Waste Management Ford Mustang driver claimed the Shannons Thunder in the Valley event with a strong performance across the eleventh and twelfth races of the season to win the Darwin event for the fourth straight year.

Johnson won race 11 of the year on Sunday morning and then followed Bowe home in the finale’ to take the round overall, with Chevrolet Camaro driver Adam Bressington second overall and Bowe third. It’s the first time any driver has won four consecutive rounds at any venue currently or previously on the TCM schedule.

It also ensures Johnson – the defending champion – takes a handy points lead into the next round of the series in Townsville later in July.

Competition was thick throughout the field with Ian Woodward wining his first ProSports round in his FatAz Racing Camaro, Leo Tobin and Jim Pollicina completing the class podium.

Bruce Williams, meanwhile, capped off a strong weekend by taking the ProAm class victory aboard the AC Delco Torana. Andrew Fisher and Cameron Tilley completed the podium, while Johnson’s ProMasters victory came ahead of Adam Bressington and John Bowe.

Johnson won race 11 of the series with a measured drive to win early on Sunday afternoon, while Bowe stormed to second place between his old rival. A storming first corner pass saw Bowe third half-way through the opening lap, before he quickly passed Adam Bressington for second.

He gradually closed the margin to Johnson in the closing laps however was unable to really challenge the eventual winner. Nevertheless it was a superb comeback drive from the former champion after damage on Saturday limited him to a finish further down the field – and a late night repair for his team.

Bressington finished third while Jim Richards was fourth to continue his strong weekend. Mark King was a superb fifth, working his way through the field after damage yesterday.

Race 12 saw Johnson and Bowe lead the field into the first corner, Bowe again committing to the outside and grabbing the lead away from Johnson. He pushed hard early in the race to establish a handy, if narrow margin, and ultimately edged away to win by just under eight seconds.

Johnson finished a safe second in the knowledge that he didn’t need to win the race to take the overall round trophy. Bressington finished third after he passed Jim Richards for the position late in the race.

The Touring Car legend had held the top three spot for the opening laps but the slightest of moments at turn one saw Bressington, and his Camaro driving teammate Mark King, pounce late in the race. Behind Richards, Jason Gomersall, Andrew Fisher, Bruce Williams, Cameron Tilley and Ian Woodward completed the top-10 in the final race of the weekend.

Having trailed Bowe by five points coming into the weekend, Johnson now takes a 21-point series lead into the next round of the series, to be held for the first time alongside the Watpac Townsville 400 in early July.

Adam Bressington moves to third while Cameron Tilley is fourth and also leads the ProAm standings. Leo Tobin holds a small lead over Jim Pollicina in the ProSports standings ahead of the Townsville event.