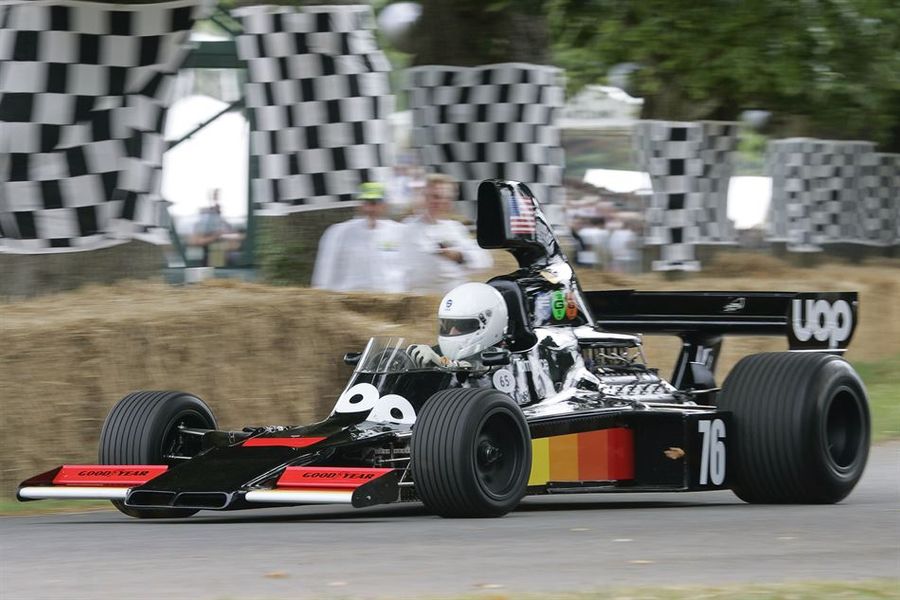 More details have been announced in recent weeks about Goodwood’s forthcoming 73rd Member’s Meeting – with some of the demonstrations being as mouth-watering as the actual track action. Around 25 mid-1970s Formula One cars are expected, an era typified by the large airboxes over the driver sucking down the air for the atmospheric engines of the day, with Jean-Pierre Jarier now confirmed as taking part on a Shadow DN5 he raced in period as well as a host of McLaren F1 GTRs, the race version of the famous road car celebrating the 20th anniversary of its 1995 Le Mans win.

Jarier will be out in the DN5 he placed on pole for the 1975 Argentinian Grand Prix – chassis 1A – though he failed to start the race after the crown and pinion stripped on the warm up lap. He took pole again at the Brazilian GP two weeks later but retired after 32 laps with fuel system issues.

Joining the Shadow on track will be some of the classic cars of the era, including Niki Lauda’s 1975 title-winning Ferrari 312T with its distinctive flat-12 engine, a pair of  Lotus 72s, always a crowd favourite, raced in period by Emerson Fittipaldi and Ronnie Peterson, and March, Tyrrell and McLaren machinery campaigned by, respectively, Peterson, Patrick Depailler and James Hunt.

Rarities such as the world’s only Amon AF101, as raced by Chris Amon in 1974, the unique Shadow DN7-Matra raced only by Jarier, and the Token RJ02 in which Wales’ greatest motor racing hero, Tom Pryce, made his F1 debut, will also take part.
The BMW-powered McLaren F1 GTR was never intended to be a race car but proved a potent weapon in the GT races of the 1990s, a Japanese-backed example beating the prototypes to win the 1995 Le Mans 24-Hour race overall. Fifteen F1 GTRs are expected at Goodwood, including the Harrods liveried car that was third at that Le Mans (the winning car resides in McLaren’s collection) with Derek and Justin Bell as part of the crew, other famous liveries of the day will be out on track including examples bearing allegiance to West, Gulf and FINA.

Indy 500 winner and Goodwood regular  Kenny Brack will drive an ex-Parabolica Motorsport ‘long-tail’ GTR while Richard Smith’s similar car - in which Brack was narrowly beaten to victory at last year’s Festival of Speed – will also appear.  Other significant McLarens include Nick Mason’s unraced development machine, which the former Pink Floyd drummer will drive, and the Gulf car in which Ray Bellm and Maurizio Sandro Sala won BPR races in 1995, and which was subsequently taken to the ’96 British GT crown.

The British GT-winning long-tail ‘EMI’ car, an ex-Bigazzi machine raced by Jacques Laffite at Le Mans, and Ralf Schumacher’s race-winning Lark version from the 1996 Japanese GT series, have also been confirmed among a prestigious list of entries.