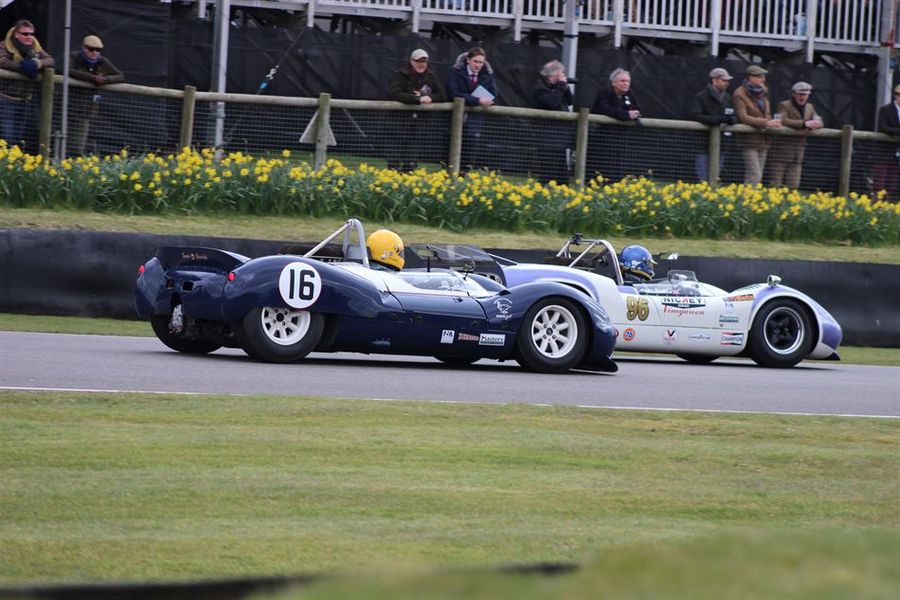 After a dramatic Sunday race-day at the 74th Member’s Meeting which saw two major incidents and several safety car periods, the Goodwood Road & Racing Club have issued the following statement:
Goodwood Statement – Monday 21 March 2016, issued at 10:50hrs:
“Goodwood reviews all procedures after every event including health and safety. In conjunction with the relevant motor sport bodies, we will be reviewing the issues raised at the 74th Members’ Meeting to ensure Goodwood continues to hold safe events.”
The first of Sunday’s races, the Brooks Trophy, the Lotus 18 of Stephen Bond clipped a spinning Cooper exiting the chicane and was launched into a lurid set of tumbles that saw the car leave the track and end up in the small pedestrian tunnel under the pit straight. Fortunately the tunnel was empty and Bond escaped with just a broken shoulder from an incident that looked like it could have caused far more injury.
In the afternoon’s Bruce McLaren Trophy the Lola T70 Spyder of Michiel Smits went off on the opening lap of the Bruce McLaren Trophy for 1970s Can-Am and Group 7 cars and and impacted the barriers hard. Though unofficial reports suggest Smits got out of the wrecked Lola himself, he was air-lifted to hospital and the race declared after two-laps, with lengthy delays for barrier repairs and the remaining races all shortened. We now believe that the Dutch racer has only superficial injuries after what has a heavy impact.
Quite what Goodwood’s review will involve is as yet unclear, though more protection for the crowd area opposite the pits would seem like after the tumbling Lotus entered a spectator area. With regards to the Bruce McLaren Trophy incident, as more than one on-line forum has suggested this morning these cars are the quickest at the meeting, indeed, Nick Padmore in another Lola T70S Spyder set the fastest-ever race lap of Goodwood at this meeting last year, but are largely in the hands of amateurs, albeit in most cases very competent amateurs, rather than the leading drivers of the age when they raced in period.
Several other races were punctuated by incident worthy of a safety car intervention, the Graham Hill Trophy ending after several processional laps of neutralised action.
It would be a shame to see the quickest categories relegated to demonstrations rather than races, but it would also be sad to see the very original state of the circuit changed to suit modern safety requirements. Whether those two aims can both be successfully fulfilled will only be revealed once the weekend’s incidents are fully reviewed.
74th Member’s Meeting Goodwood Road & Racing Club Goodwood Statement