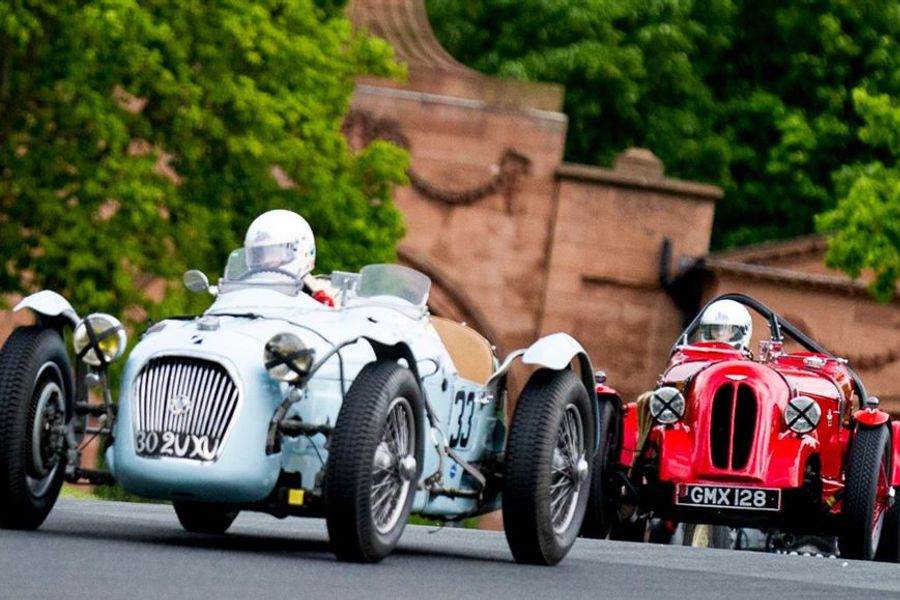 The AMOC Racing 2017 season gets fully underway at Oulton Park in Cheshire on Saturday 13th May with their first full meeting of the year, the day offering as ever a great range of classic sportscar racing. The premier race series that the club is renowned for all return, covering decades of motorsport from the entertaining Pre-War Team Challenge to modern sportscars contesting the Aston Martin GT Challenge.
First of the day’s seven races will be for the AMOC ‘50s Sports Cars which also incorporates the Vredestein JEC Jaguar XK Challenge field. The 30-minute race features some classic 1950s machinery, with the 1952 Frazer Nash Le Mans Replica of Martyn Corfield taking on cars such as Robi Bernberg’s Cooper T39 Bobtail and the Bristol-engined Lister ‘Flat Iron’ of Stephen Bond. Right from the end of the decade we see the Turner ‘Gurney Special of Steve Watton and the most modern of the Jaguar runners, Paul Kennelly’s XK150S.
The Innes Ireland Cup starts the afternoon’s race action and features GT and Touring Cars that would have raced internationally prior to 1966. The Oulton Park field contains a host of period classic cars for the 45-minute event, from Jaguars and Austin-Healeys to a mighty Ford Mustang.  Five E-Type Jaguars are currently entered, with three Austin-Healeys taking on the challenge. Other marques include the Ginetta G10 of James Guess and James Hilliard, the diminutive Lotus Elan raced by Stephen Bond and the 4.7 litre Mustang in the hands of Nicholas King.
The Pre-War Team Challenge features cars from the 1930s or earlier, all being raced hard despite their advanced years. The 20-minute event sees some classic marques taking to the track, with entries including Bentleys, Invictas, Lagondas – and of course from Aston Martin.  With the efforts of the drivers usually highly visible in these period cars, the challenge is always a crowd favourite at any event.
The AMOC Intermarque Championship brings together some of the great sportscar manufacturers who battle for championship and marque honours. 2016 champion James Hilliard shares a Porsche 968 CS with James Guess, and the duo already have a win under their belts in the season-opener at Donington Park. The Porsche marque came out on top last season and a number of different models are entered, but challengers from the other marques cannot be discounted. The Ferrari F355 Berlinetta of Geoff Lewis and Jason Hindle will be upholding Italian honours, while Aston Martins as varied as the DB4 Lightweight crewed by Martin Melling and Jason Minshaw and the mighty AMV8 of Simon Watts and Roberto Giordanelli will be in the mix.
Amongst the more historic races is a round of the Aston Martn GT Challenge while joining the AMOC runners for the day is the guesting Porsche Club Championship, which will have two 25-minute races.
Qualifying starts at 09.10 on Saturday morning, with the first race for the AMOC ‘50s Sports Car with the Vredestein JEC Jaguar XK Challenge set for an 11.50 start. After an hour’s break racing resumes in the afternoon at 14.25.