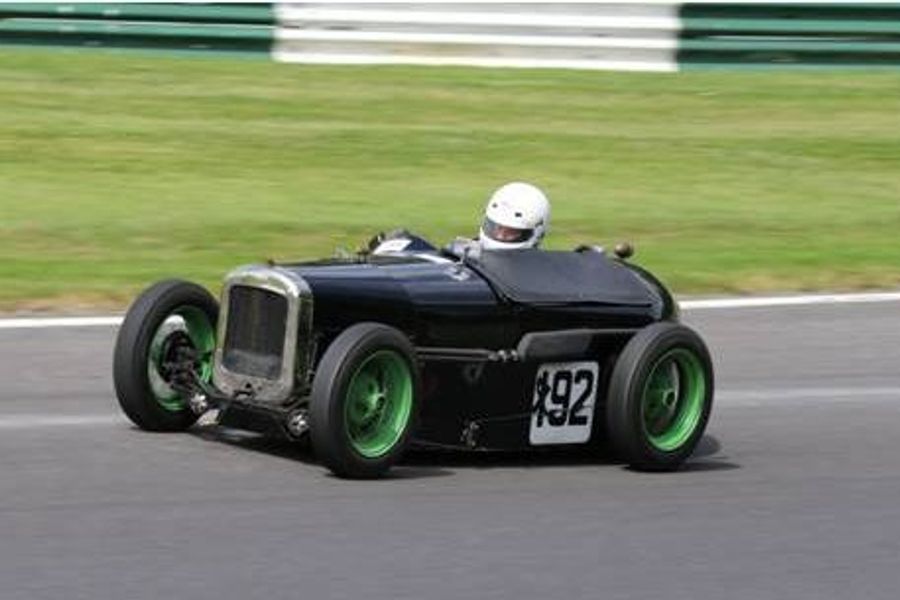 As the Vintage Sports-Car Club celebrated a remarkable 40-years of racing at Cadwell Park with its Shuttleworth and Nuffield Trophies Meeting on Sunday 24th of July, it was 18-year-old Tom Waterfield who stole the show, claiming the Voiturette Trophy in his Austin 7 Special. Following in the footsteps of mother, Jo Blakeney-Edwards and stepfather, Simon – both successful competitors in their Frazer Nash Super Sports – Tom put on an impressive and mature display in the diminutive racing Special to be the first 750cc finisher in the Spero & Voiturette Trophies Race, amongst the VSCC’s most historic and celebrated collections.

The triumph was the Somerset youngster’s second outing of the afternoon, following an equally impressive 7th place finish driving Tom Walker’s GN Special in the ever-competitive annual ‘Chain Gang’ event. A thrilling battle at the front of that race was curtailed by red flags brought about by an incident for Ian Bingham’s Geoghegan Special, the driver escaping any serious injury, the car less fortunate. Nevertheless, it remained a worthy victory for Julian Grimwade’s Norris Special as he kept the hard-chasing Eddie Gibbs’s Monoposto and the Cirrus-engined GN Parker of Justin Maeers at bay.

Enjoying his first outing of the 2016 season, Maeers was involved in another thrilling contest as he finished runner-up to Tom Walker’s Amilcar-Hispano, the latter claiming the John Holland Trophy, his second Pre-1931 Vintage Racing Cars win of the year, with Oulton Park victor, Tony Lees a creditable third in the AC/GN Cognac Special. In the same race, Duncan Pittaway claimed a long-awaited first Williams Trophy victory in his Bugatti T35.

Whilst there was disappointment for the ERA R3A of Dick Skipworth, withdrawing with mechanical issues after pilot, Mark Gillies had set the fastest lap of the morning’s qualifying, there was ‘home’ success on the day for the Lincolnshire marque as Nick Topliss’s R4A claimed All-Comers Scratch success, followed by Shuttleworth Trophy honours in the day’s title feature, chasing home Fred Harper’s mighty 1957 Kurtis Indy-Roadster, with Eddie Gibbs on the podium again, receiving Nuffield and Len Thompson Trophies in the Frazer Nash in third.

Will Mahany demonstrated his mastery of Cadwell Park once more, claiming his 11th Spero Trophy in the HRG Le Mans, as well as race victory in the Geoghegan Trophy for Standard and Modified Pre-war Sports-Cars; that silverware went to another of the club’s young ‘hotshots’, however, with Eddie Williams the first Vintage 1500cc finisher in second, guest driving Charles Gillett’s Frazer Nash Super Sports.

A strong turnout of 17-pre-war MGs boosted the day’s entry, supporting a number of races across the programme, including the Triple-M Register MG v Austin 7 Challenge, won by 23-year-old David Seber’s invited Wolseley Hornet Special, with Mike Painter claiming the ‘Challenge’ victory in his MG Kayne Special, ahead of 18 year old son, Harry’s MG PA and Gregan Thruston, the first of the Austin 7 competitors in his 1932 Special.

Also amongst the Pre-war ranks, there was a second successive Special Pre-war Sports-Cars triumph for Dougal Cawley’s GN/Ford ‘Piglet’ in the Melville Trophy, whilst David Lewis and Roland Woodtli – the latter travelling from Switzerland to participate – claimed Handicap Race wins in the Alvis Firebird/Speed 25 and Riley 15/6 Specials respectively.

Complementing the predominantly Vintage programme, Mike Fowler won the day’s closest finish as his Cooper Mk 5 pipped the Staride Mk 3 of Xavier Kingsland by 0.06 seconds in the F3 (500) Race, whilst the Classic Formula Fords entertained with their Pre-1982 machinery as Championship leader Adriano Medeiros claimed the spoils in his Van Diemen RF80.