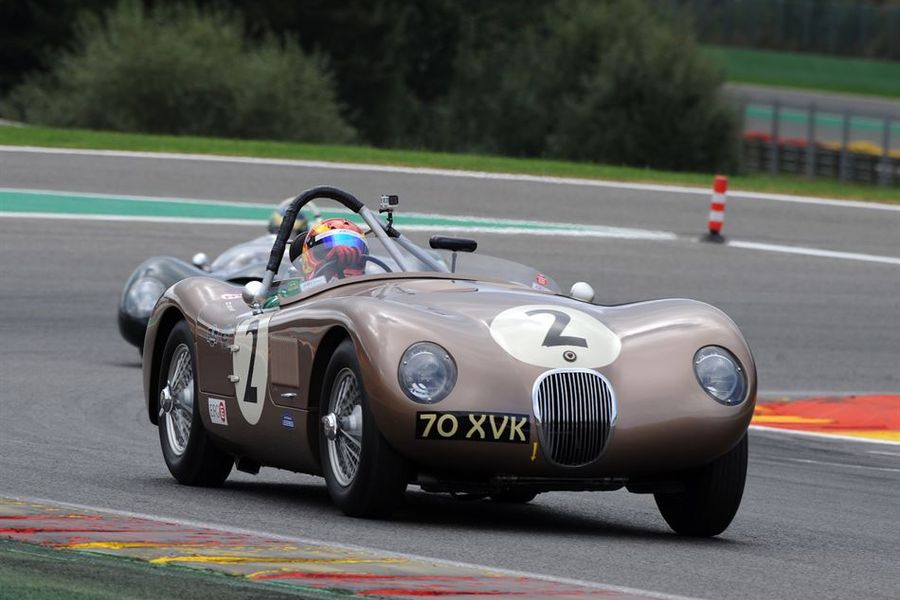 Motor Racing Legends is gearing up for a spectacular line-up of cars for the combined Stirling Moss Trophy and Royal Automobile Club Woodcote Trophy race at the forthcoming Spa Six Hour event, September 15th-17th.
A packed grid of 50s sports cars will be out for the 61-minute race scheduled for Saturday afternoon at 13.35pm. The sight and sound of this grid as it rumbles through Eau Rouge for the rolling start must be something of a record and a moment not to be missed. A grid packed with Jaguar straight-six, Chevrolet V8 and straight-four Coventry Climax engines with open pipes will reverberate through the Ardennes forest as this stunning grid make their way up the Kemmel straight and around the 4.2 mile alpine circuit.
Last year, the Lister Knobbly of Tony Wood and Will Nuthall crossed the Stirling Moss Trophy finish line first, with the similar Knobbly of Lewis and McIntyre hot on their heels. This September eleven Listers will be jostling for position at the front of the pack with five Lister Knobblies including the return of the Wood/Nuthall duo. Joining them are four Costin-bodied Listers - look out for both JD Classics’ pilot Chris Ward and Richard Kent. Steve Brooks and Stephen Bond both bring Lister ‘Flat-irons’ – one in the Stirling Moss Trophy and one in the Woodcote Trophy - and Adam Lindemann fields a 5.7litre Chevrolet engined version. Alongside the Lister gang and likely to be contesting for top position will be James Cottingham’s Tojeiro Jaguar, and no less than ten Lotus 15s. Keep an eye out for father and son duo Grahame and Oliver Bryant and US driver Michael Gans - both are regular podium visitors. In this same class are four Cooper Monacos and behind these larger engine classes you’ll find a plethora of other rare and genuine British sports-racers including seven Lotus 11, Elva, Rejo, and Lola Mk1 to name just a few.
Two fabulous Jaguar D-Types will be the ‘Big Daddies’ of the Woodcote Trophy pack. Gary Pearson co-drives with Carlos Monteverde, and Clive Joy drives a similar car solo. Look out too for last year’s runner-up - the Cooper T38 of Fred Wakeman and Patrick Blakeney-Edwards, with Katarina Kyvalova completing this class of big-engined, disc braked cars with her Cooper Jaguar T33. Behind, the Jaguar C-Type of John and Charlie Brown adds some style to the drum braked Class, alongside the stunning green Jaguar XK140 FHC of João Mira-Gomes. They will be competing against an amazing four Allard J2 plus the RGS Atalanta of Barry and Tony Wood
As usual with the Woodcote Trophy, competition is likely to be fierce all the way through the grid. The 50s Sports cars running to genuine period specification generate close competitive racing so you can expect some wheel to wheel action amongst all your favourite 50s sports cars; Austin-Healeys, Aston Martin, Jaguar, Lotus, Maserati and many more.