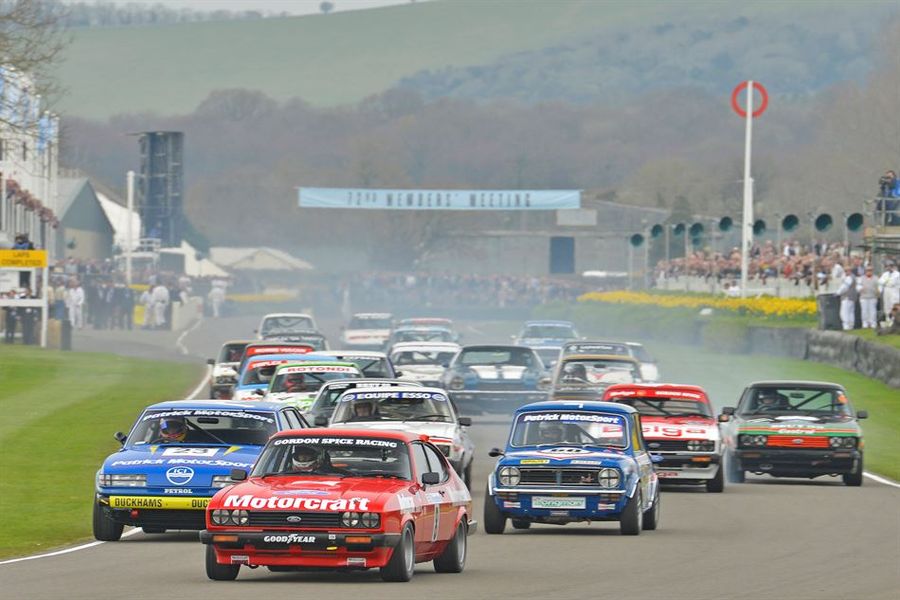 Since the revival of the sell-out Goodwood Members’ Meeting in 2014, the Gerry Marshall Trophy has proved to be one of the most anticipated and spectacular races at this annual March event. For this year’s 75th Members’ Meeting, taking place over the weekend of the 18th and 19th of March 2017, the format of the Gerry Marshall Trophy race for Group 1 production saloons of the 1970s and early ’80s will differ from previous years, but with the racing set to be as exciting as ever.
For the first time, the Gerry Marshall Trophy becomes a one-hour, two-driver race. The Group 1 saloons will be taken into battle by a wealth of famous drivers into dusk on Saturday, evoking memories of the legendary Spa 24 Hours, ahead of the evening’s lively entertainment and fireworks.
On the Sunday, the inaugural Gerry Marshall Sprint will form the second-leg of this touring-car epic. Taking inspiration from the current British Touring Car Championship, this race will feature a reversed grid, with the owners taking over, their starting position determined by the car’s result from the Gerry Marshall Trophy.
Only cars running at the finish of the Saturday-evening Trophy race, and those that competed 95 per cent of the Saturday winner’s race distance, will be reversed. All others will start the Sunday Sprint from their Saturday Trophy finish or non-finish position.
Always popular with Members’ Meeting spectators, the Gerry Marshall line-up will include a number of famous Group 1 racing tin-tops, all sporting their correct period sponsor livery, including Ford Escorts and Capris, Chevrolet Camaros, Mini 1275 GTs, Rover SD1s and Triumph Dolomite Sprints, sharing track space with other memorable marques such as Alfa Romeos, BMWs, Mazdas and Volkswagens.
One Group 1 racer expected to make its Goodwood racing debut will be the ex-Gerry Marshall Vauxhall Magnum DTV, in which he took a class victory, and second place overall, at the 1977 Spa 24 Hours. This well-known Vauxhall was sold by Goodwood partner Bonhams at its sale of Historic Motor Cars during last year’s 74th Members’ Meeting, with the car being prepared since then ready to compete at this year’s event. A trio of period competition Ford Capris is also set to race for the very first time at the Members’ Meeting.
Among the many star drivers contesting the Gerry Marshall Trophy will be tin-top favourites Andrew Jordan, Tim Harvey, Patrick Watts and Stuart Graham and numerous other race aces.
Members' Meeting Goodwood Gerry Marshall trophy