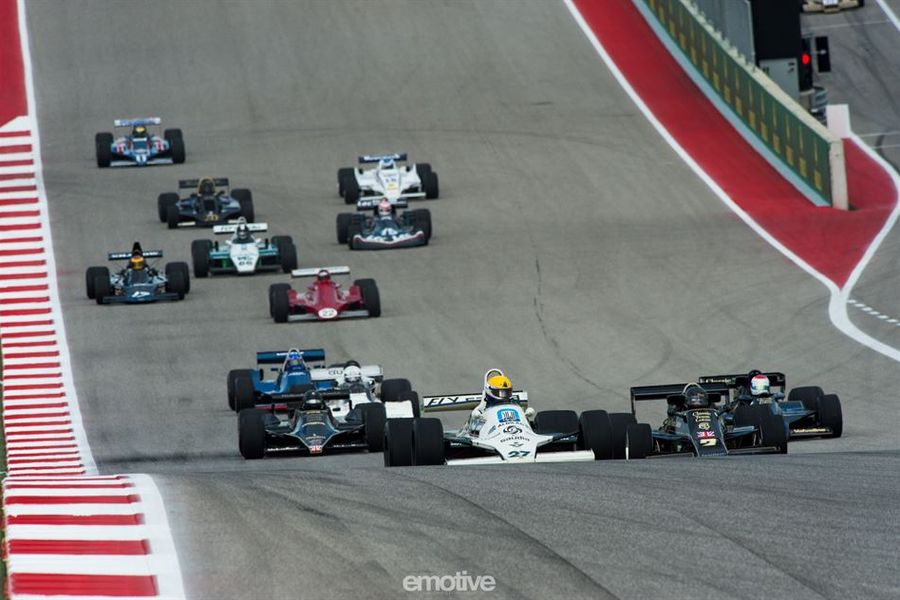 Charles Nearburg and Katsu Kubota took a win apiece at the Circuit of the Americas in Texas in the two Masters Historic Formula One races that supported the weekend's US Grand Prix.
Kubota (Lotus 78) took the opening race after wrestling the lead away from Nearburg’s Williams FW07B. From the rolling start, it was Nearburg who held the lead but Kubota did not give him an easy first lap, and after a close wheel-to-wheel tussle through he complex of turns 12-15, Kubota finally asserted himself into the lead at Turn 1 on lap two.
Behind, Greg Thornton (Lotus 77) was not about to let the ground-effect cars get away, and challenged Nearburg into the complex. Behind the leaders, James Davison (Arrows FA1) had made great progress having opted to start from the pit lane start and was into 11th place by lap three. Jean-Denis Deletraz (Surtees TS19) was fourth, holding a slim gap ahead of Duncan Dayton (Lotus 79) in a battle that would rage all race.
On lap four, Thornton passed Nearburg into Turn 1, having just set fastest lap. Davison's progress continued and he was up to eighth by lap four and sixth a lap later. By lap six, Thornton had set another fastest lap and was less than a second from the leading Lotus of Kubota. However, as the pair approached and lapped the troubled Amon F101 of Jean-Pierre Valentini, Thornton backed off and was passed by Nearburg, but re-passed once in clear air. This had given Kubota a few seconds of clear advantage though, which would later prove vital as the Lotus was nursing front wing damage from contact on the first lap.
On lap seven a gear linkage issue spelled the end of Davison's race as the Deletraz/Dayton battle for fourth raged on and Nearburg kerb-hopped through the complex in dogged pursuit of Thornton. James Hagan (Tyrrell 011) was leading the Lauda class, up to seventh from 15th on the grid.
Dayton finally found a way past Deletraz at the Complex on lap eight, at which point Kubota had a 1.4 second lead over Thornton with Nearburg behind - until he made his move on the back straight and took second, in spite of Thornton remaining glued to his rear wing around the endless Turn 18.
Kubota hung on to win with Nearburg second, with Thornton third, while Lauda class winner James Hagan followed Duncan Dayton over the line for fifth place.
A huge crowd was on hand for race two in which a determined Nearburg aimed to stay ahead of race one victor Kubota.
With pole-sitter James Davison pitting at the end of the green flag lap with a recurrence of gear linkage problems, Charles Nearburg led the pack into Turn 1, pursued by the three Lotuses of Greg Thornton, Katsu Kubota and Duncan Dayton. Davison started from the pit lane to avoid any dramas with his gearbox and was up to 18th at the end of the opening tour.
Behind Nearburg's Williams, which began setting a string of fastest laps to assert a dominant lead, Thornton was defending hard from Kubota, with Dayton, Deletraz and Mike Thurlow (Tyrrell 009) behind. Davison had hauled the Arrows up to 12th by the end of lap two, as Kubota found his way past Thornton's Lotus, which developed engine problems and pitted from the race for second.
James Hagan was leading the Lauda class in 13th, behind Davison who was now 10th until a recurrence of the gearshift problem from race one consigned the Arrows to the pit lane once more.
Bud Moeller (Ensign N177) and Mike Thurlow were locked in a battle for fifth, the Ensign having a much better run than in race one. Doc Bundy's pit lane-starting Lotus was now up to 11th as Jean Denis Deletraz passed Dayton's Lotus for third on lap seven.
With Nearburg stretching further and further ahead of Kubota's solitary Lotus in second, Dayton wasn't about to let the Fittipaldi-class car of Deletraz get away and stuck doggedly to his rear wing. Further back, Martin Lauber's Wolf WR6 was chasing the LEC CRP1 of Ron Maydon.
On lap nine, Chris Farrell (March 821) passed Bud Moeller into the complex at Turn 12 and with one lap to go, Duncan Dayton was still filling the mirrors of Deletraz, just 1.3 seconds behind, with Lauber less than half a second from Maydon.
At the chequered flag, Texas resident Charles Nearburg coasted triumphantly over the line, from Katsu Kubota in second and a surprised Duncan Dayton in third. Deletraz had a gearshift issue on the last lap, which dropped the Surtees to sixth, but he hung on to secure the Fittipaldi class victory. In spite of a spin next to pit entry, James Hagan took Lauda honours and John Delane (tyrrell 002) took the Stewart trophy. The battle for eighth between Lauber and Maydon resolved itself at the complex in favour of the Wolf.
The next stop for the Masters Historic Formula One drivers is the Mexican Grand Prix where battle will be renewed in less than a week’s time!
Kubota Fomrula One Masters Historic Racing Masters Lotis Nearburg